Home SPORTS For the Love of the Game: The NCAA Women’s Final Four in New Orleans
SPORTS
May 6, 2013 Paul Wegmann 0

For the Love of the Game: The NCAA Women’s Final Four in New Orleans

Women do amazing things. At its best, society has known that, in family, in art, in business, in politics—in all phases of life (including, but not least of all, love)—given a level playing field, the magic of our existence can be revealed as something more than complementary, where two halves amount to more than a whole. Strangely, though, this has often been lost on the world of sports. 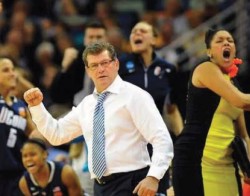 Fans who pass on women’s sports do not realize what they are missing. This past April, New Orleans was host to the NCAA Women’s Final Four at the New Orleans Arena. New Orleans and Louisiana have recently been home to some great women’s basketball programs, including the LSU teams, which made four straight final fours 2005-08; Tulane’s teams, which made the NCAA tournament nine straight years from 1995-2003 and of course, the legendary Louisiana Tech program, which has won three national championships, reached 13 Final Fours and 23 Sweet Sixteens in the course of 27 NCAA tournaments.

An event like the NCAA Women’s Final Four falls in line with the Super Bowls, the BCS, NCAA and conference championships and the bowl games that have come to form the backbone of the city’s sports tourism industry, which is now a major component of the city’s overall tourism industry. This time, fans from the Final Four participants, Connecticut, Louisville, Notre Dame and California, flooded the city and showed again what a perfect mix major sports, tourism and New Orleans can make. The Women’s Final Four also brought the ESPN coverage team, featuring Kevin Negandhi, Kara Lawson, Carolyn Peck, Dave O’Brien, Holly Rowe and Doris Burke, and the incredible influence their impressions of New Orleans can bring to the nation. Glowing images of the French Quarter and the Garden District interwove with positive comments about the state of the city and the incredible atmosphere surrounding the stadium and game.

The table had been set. This was the city’s third time hosting the national championship. The Connecticut (UConn) Huskies had come in 7-0 all time in national championships, including winning one prior title in New Orleans. The Louisville Cardinals entered as the classic underdog, having earned its way with upset wins against the top two teams in the country: Baylor and Notre Dame. Ultimately, the incredible talent on the floor matched the presentation as UConn showed itself to be one of the greatest teams of all time, accelerating past Louisville early in the first half to close with a 38-15 run, and never allowing them to get close again. Freshman forward Breanna Stewart showed incredible instincts and leadership and had one of those moments in sports where a national audience could see a real star break out for the first time on a big stage. Stewart poured in twenty-three points: three three-point shots, nine rebounds, three blocks and three steals in thirty minutes of nearly flawless basketball. With forward Kaleena Mosqueda-Lewis and fellow guard Kelly Faris, Stewart led what can only be described as one of the best single-game or championship performances in NCAA basketball history, men’s or women’s, any division.

Perhaps most remarkable in watching this incredible display is the fact that women’s basketball is more relatable to the far majority of those who might be watching. The game, by and large, is played at eye level—not above the rim, which would be more like the great game that Naismith likely envisioned: fluid and heavily based on individual player cleverness and anticipation as opposed to sheer size or height. Hand-eye coordination is at a premium because physical capabilities do not so overshadow the rules and limits of the game as to render them almost meaningless. Skills are key, making the game one of fundamentals, and that was so evident on championship night as the Huskies jumped on every little mistake the Cardinals made while making few, if any, themselves, not just as to turnovers but also ball handling, getting open, shot selection, passing, speed to the basket, and, on defense, almost never leaving opponent shooters open on the other side of the court. Huskies head coach Geno Auriemma had his team as prepared to play as any that a basketball fan could ever hope to see. The Huskies were so good in every phase, so excellent in all fundamentals, playing together in perfect chemistry, that it would not be wrong to say that, in terms of a team playing together as a pure “team,” they may just be the best amateur basketball team in the country, any division, any gender.

The only disappointing part was attendance, which was less than capacity at the Arena. While this may have been the fault of the city, or the NCAA, or perhaps just in the fact that the popularity of the women’s game continues to lag considerably behind the men’s, it should not happen in a city that relies more and more on sports tourism as its economic lifeblood. Regardless, it should serve to remind local fans that if they want to find an affordable, available front-row seat to great sporting moments, they should perhaps look to the next women’s basketball game at UNO, Tulane or LSU.

119
previous Coming to New Orleans: Sailing for Everybody
next Benjamin Watson: A Perfect Fit