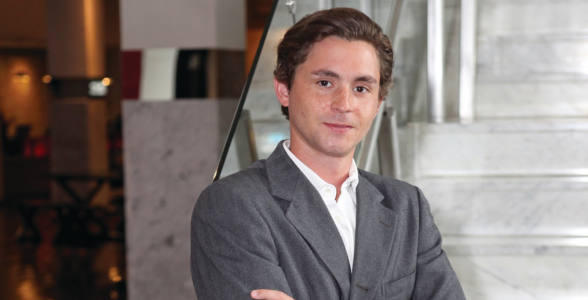 A leap from working in the energy trade to providing insurance for entertainment and film production seems bemusing, but to Emory Maginnis, president of Maginnis Film & Entertainment Insurance Services (MFEIS), it makes perfect sense.

“The essence is essentially the same,” Maginnis, a former account executive at a Metairie risk management firm, said of his first and current career paths. “They both require the ability to analyze, mitigate and control risk.”

Covington-born Maginnis earned his B.B.A. in banking and finance from the University of Georgia, with a year spent studying economics and philosophy at Oxford University. While in the U.K., he became an assistant broker at Lloyd’s in London before returning stateside to finish his education—and get back home.

“I have always been proud to be from Louisiana, but as most people will tell you, after Katrina, the passion for our state was overwhelming,” remembered Maginnis. Seizing a chance to return, he enrolled at Tulane University’s A.B. Freeman School of Business in 2007 and received his Master of Finance a year later. Then it was off to Illinois to work as a proprietary trader at the Chicago Mercantile Exchange, an endeavor Maginnis says prepared him in many ways for working in entertainment insurance.

Like lives and property, entertainment productions require insurance. Unlike these typical forms of coverage, though, film requires careful consideration of specifics. “Film insurance is a very different form of insurance from standard commercial and property insurance. While some of the coverages, like worker’s compensation, automobile and general liability, are similar, we also have very unique risks, like cast insurance, negative film coverage and faulty stock coverage,” explained Maginnis.

While working at the risk management firm, Maginnis began receiving more and more film-related insurance requests. Seeing an opportunity, he left his job to establish MFEIS. The company quickly partnered with a New York City-based film and entertainment company; the businesses together employ about 30 workers servicing the film industry.

Asked about his favorite project so far, Maginnis named “Dallas Buyers Club,” a drama slated to premiere this month at the Toronto International Film Festival. Stars Matthew McConaughey and Jared Leto lost between 30-40 pounds for their parts, and Maginnis’ agency was responsible for insuring their roles, which meant ensuring the actors remained healthy. The film’s insurance mandated regular visits to doctors and nutritionists, said Maginnis; tailoring these requirements and policies alleviated the risk of one actor or both being unable to complete the movie.

Maginnis has high hopes for the New Orleans film industry. “We have a skilled workforce, great infrastructure, amazing culture and even better people,” he said. “We’ve come a long way to become the number-three state in the country for film production, and I think New York should be a little nervous about keeping the number-two spot.”