Though he jokes that what ultimately brought him from the East Coast back to the Gulf South was a preference for hurricanes over snow, it’s clear that Dr. John Joslyn is professionally driven by a desire to be on the cutting edge of radiologic technology. 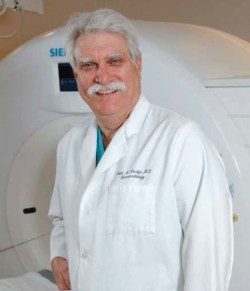 This fascination has inspired him to accumulate a wealth of experience in his sub-specialty of neuroradiology, both in private practice and in academic medicine. From 2007-2012, Dr. Joslyn was Division Chief of Radiology and Medical Director of Radiology at East Jefferson General Hospital, where today he is one of two board-certified neuroradiologists.

First things first — what does a neuroradiologist do?
I get referrals from physicians who suspect their patient could have a neurological disorder. With imaging techniques such as CT scanning and MRI, I look for abnormalities in the brain, spine and peripheral nervous system.

How did you choose your specialty?
I have always been enthralled by the connectivity of neurology. You can tell so much about what is going on in the body just by getting a look at the brain or the spinal cord. I was in medical school in the ‘70s, when the medical use of CT scanning became clinically available. It was an incredibly exciting time in radiology. Before CT scanning, imaging of the brain was pretty crude. Neuroradiologists used a needle to inject air directly into the brain ventricle or indirectly through a lumbar puncture. The resulting image could show a mass in the brain, but you couldn’t tell much else about it.

How about recent technological breakthroughs?
Over the past several years, there have been radical improvements in CT scan technology. We can now use two X-ray tubes to simultaneously scan the body — what’s called dual-sourced technology. This has drastically reduced imaging time, which is key for imaging a beating heart or a trauma or stroke patient. A total body scan can now be done in 15 seconds. For a point of reference, when I first began my residency, it took one minute to image a single slice. We have been using dual-sourced CT scanning at East Jefferson for almost two years now, and were the first in the state to adopt this amazing technology.

How is neuroradiology used to investigate dementia?
We still do not have a way to treat dementia, but if we can determine the cause at an early stage, we can slow its progression. We can now use nuclear medicine imaging to identify different forms of the disease. Alzheimer’s disease is the number one cause of dementia in the United States. With a special nuclear medicine scan called a PET scan, we can examine the pattern of deposition of a particular abnormal protein found in the brain of Alzheimer’s patients. If the protein is not detected, we know the dementia is attributed to another cause.

What are other causes of dementia?
There are many causes of dementia, including multiple strokes, frontotemporal dementia and dementia with Lewy bodies. Parkinson’s disease can also be a cause. With a new technology called DaTscan, we can indirectly examine the amount of dopamine in certain parts of the brain. This helps us confirm the diagnosis of Parkinson’s disease. A subdural hematoma can also cause dementia and can be easily diagnosed through a CT scan. This is a treatable condition in which blood collects between the brain and the skull, leading to a compression of the affected brain area. The resulting pressure from the collection of blood can produce symptoms of dementia.

Why is dementia research important to you?
Worldwide, there are 7.7 million new cases of dementia every year. The disease has enormous consequences not only for the patient, but also for the patient’s loved ones. The research is just getting off the ground — I can’t wait to see where we’ll be 10 years from now.

What most challenges you?
All of these new technologies are amazing, but radiology is incredibly expensive. My biggest challenge is balancing treatment with cost; in other words, how can I solve a patient’s problem without breaking the bank?

PHILOSOPHY:
“It’s all about making the most accurate diagnosis as quickly as possible with the most efficient use of resources.”