Movers, Shakers & Tastemakers: Young Professionals Get Their Philanthropy On

Philanthropy. It is not a word typically associated with young adults. 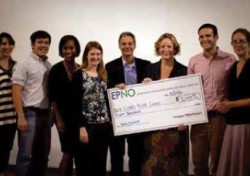 When you think of philanthropists, you usually think of older and very wealthy individuals like Warren Buffet and Bill and Melinda Gates, or locally, the Goldring family and Phyllis Taylor.

Emerging Philanthropists of New Orleans (EPNO) is a program that cultivates young adults into investors in their community through philanthropy. The idea originated at a 2008 gathering of young professionals, the 504Ward Dine Around, when the director of donor relations for the Greater New Orleans Foundation discussed the need for young professionals to engage in philanthropy. A steering committee operating under the name Crescent Civic Engagement Fund was formed, and over the next six months, the program was developed from scratch.

HOW IT WORKS
Each member is selected by a committee based on an extensive application process. Once a member is accepted into the program, he or she must be active in six months’ worth of seminars and team meetings, and make a $500 contribution to the EPNO fund. These funds are then matched by alumni, foundations and corporate donors who also see the value in developing young New Orleanians into philanthropists.

Classes are divided into four teams, or “focus areas.” The current class is focused on Economic Development, Education/Youth Development, Housing and Women’s Issues. Organizations whose mission and programming are aligned with these four focus areas are invited to respond to a request for proposals. After a series of site visits, each team directs up to $10,000 worth of funding.

The program has grown substantially. The pilot consisted of 18 members, followed by a class of 29, then 35 and the current class of 40 members. To date, the organization has donated approximately $122,000 in grants to 29 local nonprofit organizations.

GRANT RECIPIENTS
EPNO grants have helped organizations such as takeashine, an online crowd-funding platform for underprivileged students in New Orleans who risk missing out on higher education because they cannot meet college costs. With the support of Social Entrepreneurs of New Orleans, takeashine launched a pilot class this fall of five high school seniors from across New Orleans who will raise approximately $5,000 to cover their college funding gap.

Another recipient is The Beautiful Foundation, which provides the only all-girls after-school and summer programs with gender-specific models, research and evidenced-based curricula so that young females can learn good behavior, safe choices and healthy outcomes.

EPNO has also supported the Early Childhood & Family Learning Center, which aims to create holistic programs to empower neighborhoods by improving academic, socioeconomic, cultural and health opportunities for families. It follows a neighborhood-based model that has been launched in Central City through the Mahalia Jackson Community Center. The organization’s work has reached all corners of the city and its impact has been vast.

STANDOUT MEMBERS
Some of the region’s most promising young minds have been a part of the program, including Buddy Boe, Chief Administrative Officer of St. Charles Parish Government; Westley Bayas, New Orleans Director of Stand for Children; Makiyah Moody, Governance Initiatives Director for the Louisiana Association of Public Charter Schools and Melissa Ehlinger, Vice President of Strategy, Policy and Research at the New Orleans Business Alliance.

EPNO will graduate its fifth class this month and is currently accepting applications for the 2014 class. For more information about EPNO or to make a donation, visit emergingphilanthropists.org