Mark Ingram shows up to play—and shows his character on the field.
The New Orleans Saints have built their recent teams on character—a quality that can make all the difference between a mediocre and a great football organization. 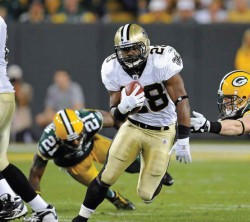 That means not just loading a team with talent but also ensuring that those talented players do not become angered or undisciplined when on the field, or shirk when confronted with adversity; rather that they stay focused and become skilled at winning. Thus, a team becomes wise as a unit and earns the win even before the game, leaving the less-disciplined teams fighting a battle they have already lost in the locker room, in the film room, in the training facility.

Ultimately the Saints have shown a commitment to their players by relying on them at key times, and, in return, their players have returned that trust and commitment with incredible performances. Perhaps no player shows the potential rewards of that mutual two-way trust better than running back Mark Ingram. Though Ingram had been held out of several games throughout the year with nagging injuries, he reemerged in a Sunday Night Football tilt against the Dallas Cowboys with a rousing performance that will stand the test of time as a tribute to character—as the Saints coaching staff repeatedly turned to him en route to a record-setting night.

Ingram recorded 16 touches for 160 yards and a touchdown, delivering momentum to his team with crushing runs down the middle and around the edge that ultimately smashed whatever spirit remained in the hearts of the Cowboys. Ingram delivered all but 15 of the yards in the second half. The possibility of a power back that can provide a short-yardage and goal-line threat continues to be the Holy Grail of the Saints offense.

The idea that this already top-five offense can provide a punishing blow from short range would offer the possibility of having a team that’s almost unstoppable, as evidenced by the final results of that Sunday night postmortem: 625 total yards, 9 for 12 on third-down efficiency, a nearly two-to-one time of possession and a league-record 40 first downs. The total yards represented the most ever by any Saints team and also the most ever allowed by any Cowboys team. The running game provided nearly perfect balance: 20 first downs came by pass and 15 came by run (five were by penalty). Due to the fact that the Dallas defense was repeatedly kept on its heels, the passing game was nearly perfect, gaining more than nine yards per attempt and relinquishing only one sack, while ensuring a completion rate of almost 83 percent.

Nearly flawless blocking by Brian de la Puente, Ben Grubbs, Jahri Evans, Zach Strief, Charles Brown and Jed Collins, as well as the tight ends and receivers, patiently created creases and sealed alleys that would have made Vince Lombardi proud. Ingram’s first big run came with nine minutes left in the first half as the offensive line created a sealed wall that segmented off the Cowboys’ full defensive front line—pushing them almost into the sideline and isolating all-pro defensive end Demarcus Ware—leaving Ingram free to burst into open space, cutting back to the left and picking up a healthy 13 yards while missing a touchdown by perhaps a single tackle. The result of the drive was a touchdown.

The Saints opened the second half by leading off with Ingram again, jabbing the Cowboys first with a 14-yard pickup, and then—almost like an upper-cut, immediately hitting the Cowboys with a 34-yard gain between right guard (Evans) and tackle (Strief)—Ingram ripped into the secondary finishing with a stiff arm to the safety, who, at that point, was the last man left. The result of the drive was a scoring opportunity by Garrett Hartley.

On the very next drive, Ingram again led the damage with a run between Grubbs at left guard and Brown at left tackle, stretching out a 15 yard gain—resulting in a touchdown. Yet again, on the first Saints’ drive to start in the fourth quarter, Ingram led off once more. But this time, the Saints did not stop running, as Ingram took off first for five yards, then 15 yards to the left of de la Puente, then for another 31 yards behind Evans, and, finally, with Pierre Thomas, they together rained blows down upon the Cowboys until Thomas had scored another touchdown—the coup de grâce. The drive consisted of eight consecutive runs, with no passes.

On all of these drives, on each of Ingram’s key runs, Jed Collins led the charge from the backfield, acting as a path-clearing machine against any defender unlucky enough to be blocking Ingram’s route. However, Ingram showed cut-back ability to fit the blocking scheme; broke off big runs; and also caught two passes and received three targets—the last factor being extremely important as it communicated to the opposing defense that they could not necessarily predict Ingram’s usage on any given look.

This kind of dominating performance is an example of what Mark Ingram can bring to the Saints’ offense. It’s also a glimpse of what Sean Payton had in mind when he set out to acquire Ingram in the draft. Most importantly, it demonstrates the incredible impact that trust and character in the locker room can have on the playing field.

133
previous Puntology: Tommy Morstead and the Science of Punting
next Rebound Ready