Ring in the New Year Downtown! 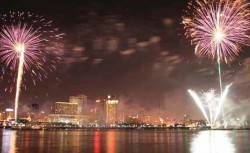 Event: Running of the Santas
The 2013 Running of the Santas will be held in New Orleans on Dec. 14, starting at 9am, in the Warehouse District. You can purchase tickets to run online, but you better hurry. Organizers are predicting more than 2,000 revelers to turn out for this year’s costumed event.

Running of the Santas started in Philadelphia 14 years ago, and it’s now held in 22 cities across the country. Last year’s event, featuring a day-long festival and fun run, attracted more than 1,000 participants dressed in full Santa Claus costumes who filled the streets and local establishments.

Best of all, part of the proceeds will benefit the That Others May Live Foundation, a non-profit charitable organization established in 2002. The foundation provides critical support, scholarships and immediate tragedy assistance for the families of United States Air Force Rescue Heroes who are killed or severely wounded in operational or training missions. runningofthesantas.com/new-orleans

Cozy up: Starbucks on Canal Street
Before braving a day of holiday shopping, wrap your chilled fingers around a tall beverage at the brand new Starbucks Coffee Company, located on the corner of Canal Street and St. Charles Avenue. Indulge in a Creamy Caramel Brulée Latte, a Peppermint Mocha, a new Gingerbread Latte or a classic Eggnog Latte. With a steaming drink in hand, and perhaps a freshly prepared pastry, you’ll be ready and raring for any obstacle that holiday shopping might throw your way. theshopsatcanalplace.com

Celebrate: New Year’s Eve Fireworks on the River
Warm up your voice box for some oohing and ahhing at this year’s New Year’s Eve fireworks display over the Mississippi River. A newly renovated 8-foot-tall-by-5-foot-wide, two-dimensional fleur de lis ornament will descend a 25-foot pole atop Jax Brewery Condominiums to launch the exquisite display—themed this year as Symphony in the Sky. Once the fleur de lis drops, a New Year’s board will light up with 200 25-watt clear bulbs, announcing the official arrival of the New Year. The famous Baby New Year, wearing a purple and gold diaper, will again be perched on the corner of the JAX Brewery rooftop for all to see.

Simulcast live on Magic 101.9 FM, WWL AM and FM, and WWL.com, the NOLA New Year’s Eve celebration will be enjoyed in more than 38 states across the U.S. (and beyond online). At the stroke of midnight, the fireworks display will illuminate the sky, choreographed to soulful New Orleans’ music. Also included will be the fight songs of visiting Sugar Bowl teams. As the fight songs play, the sky will light up in the teams’ colors. crescentcitycountdown.com

Dance: Davenport Lounge at The Ritz-Carlton New Orleans Hotel
Named for its headline entertainer, Jeremy Davenport, the Davenport Lounge exudes elegance, class and romance—the perfect spot for primped couples to ring in the New Year. Trumpeter and vocalist Jeremy Davenport has long been an integral part of the local music scene, and, at the Davenport Lounge, his talent will take you back to another era when Jazz reigned supreme. Between sets, sip well-crafted cocktails while nibbling on truffle fries or mini Black Angus beef sliders with chipotle cheddar and onion jam.