Saint on a Mission 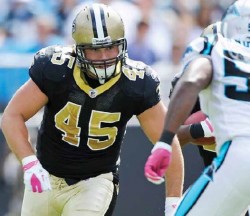 Jed Collins is a man on a mission — several missions at once, in fact. Part blocker, part receiver, part runner and part special teamer, he is the New Orleans Saints’ all-purpose weapon. No better snapshot could be found of the modern Saints franchise’s concept of character, unearthed talent, adaptability and dedication than Collins on one of his missile-like strikes into the heart of a defensive line — with Pierre Thomas, Darren Sproles or Mark Ingram following his cleared path into a wide-open lane.

The Saints are one of the few NFL teams that know how to run effectively out of a fullback-fronted I-formation, and their inclination and history of success in running downhill off their guards can be partly attributed to their trust in Collins, whose home position is indeed right there in the middle of the field. It’s an area of real estate that every team wishes they could claim as their own patch of ground. This is the traditional fullback spot, but the offensive staff is more than willing to move him around. And Collins’ versatility (including some college experience, primarily as a receiving tight end), as with so many of the Saints’ key players, allows him to bump up to the line and even run some pass routes when called upon. The Saints’ faith in Collins as a blocker and a runner — and a receiver at the goal line, in short yardage and in critical situations — has been evident over time, and Collins has become known as one of the most outstanding fullbacks in the league.

Signed out of Washington State University in 2008 as an undrafted free agent by the Philadelphia Eagles, and then continuing on to several other teams in the interim, Collins constantly strived to either make it to the practice squads or the final cuts. Ultimately in 2010, he and the Saints found each other. However, the road to being an important cog in one of the best offenses in the league was not an easy one.

“You learn to adapt,” he says. “I learned each time I was released how to survive a little bit more, and, by the time I got here, I understood who I had to be to make it on a team — the mindset I had to take on day in and day out. And once I got here, I knew what they were looking for in a fullback.” As a new member of the Saints, Collins had the benefit of learning from one of the NFL’s great fullbacks of this era, Heath Evans, and then, over the course of the 2011 preseason, he beat out league vet Corey Hall for the starting role. “By the time I reached New Orleans, I had completed the journey and had learned a lot,” Collins adds. “It was a good fit of what I could do, who I was and what they were looking for.”

Part of that mentality is recognizing the reality of the modern NFL fullback as being a singular member of a position that rarely carries a backup. There is no one else on the team who does all of what Jed Collins does as a single job description — a man sometimes in between rooms, where groups like linemen and backs meet, and sometimes without a room. “That was hard for me, coming from college, where I was a linebacker and mostly a receiving tight end, to transition to fullback and realize it is a thankless job,” Collins says. “You really have to change your concept of how you’re going to win on each play; what your positives are. It’s an island position; you have to be either real mean or real weird to play it — and I fit the weird category, because I’m not that angry or mean.”

Statistically, a fullback’s season goals can be ephemeral. As a master of all trades, the great ones can appear in the box scores but never enough to gain the headlines. “There is so much you cannot control,” Collins says. “My goals have been to identify what areas I have been good at in the past, and get better at those, but there is really no objective goal I can set for myself like other rooms can, and that’s another reason why the position is so unique. It’s a position of will, not of skill — are you willing to go in there and do it?”

Collins’ intense focus on doing what it takes to help others flourish is evident in his charity work around the city, including efforts in support of Team Gleason, Son of a Saint Foundation and Special Olympics. “Team Gleason is close to my heart,” Collins notes. “Steve [Gleason] is a Washington State guy, and I followed in his footsteps down here — knowing the legend of Steve, and we all see how it has grown. My sister was a part of the Special Olympics for a long time. She has taught me so much. Spending an afternoon with that organization will give you one of the best outlooks and perspectives on life that you can get. Just seeing the athletes who are truly dedicated to their sport — they work hard, practice, train and celebrate their success, and, regardless of how they do, they always have a smile, and they always have that positive energy surrounding them. I saw how much it did for my sister, and, if you can do something close to your heart, it makes it that much more fulfilling.”

Going Green: A simple adjustment can make all the difference.
“One of the greatest things my wife and I have done over the last two years is [adding] a green shake every day,” Collins says. “People try to go on diets, ‘eat this and not that’ and do all those kinds of things, but the concept was to add something good. We kept reading about leafy greens, such as spinach, collard greens and kale — things your body needs and wants — so we just throw it into a spinach shake, and we drink it for breakfast. My wife throws it into a drink bottle, and I drink it in meetings. We’ve added that, so, no matter what else we eat, good meals or bad meals, throughout the day [we] get some nutrition from those fruits, leafy greens [and] vegetables, and we’ll throw in flax seeds and things like that. I think just having that shake a day has changed my metabolism; it’s changed my health; it’s made my weight much more manageable. I know that as long as I attempt to consciously eat healthily through the course of the day, I know my body has the nutrition it needs. It’s been great for my wife, who is pregnant now. It’s been a difference-maker for the both of us.”

159
previous Rebound Ready
next The Rise of Khiry Robinson