The Art of Defense

The Saints aim for invincibility via smart draft picks 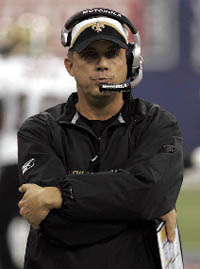 Somewhere, somehow, Coach Sean Payton has channeled Sun Tzu and Vince Lombardi. As Sun Tzu said, “Invincibility lies in the defense, the possibility of victory in the attack.” In the NFL that has been transposed into the well-worn truism that “offense sells tickets, defense wins championships.” Under Payton’s tutelage for two years, the Saints have relied on their offense to score points and earn victories; they have set franchise records for sellouts, but have garnered no championships. It is no secret that that’s because their defense has been anything but invincible.

The Saints’ longstanding need for defense is well documented. In the post-Mora era, beginning in 1995, there have been two playoff seasons, 2000 and
2006. In 2000, the team finished 10th and eighth in the league in points and yards allowed, respectively; and in 2006 the team finished 13th and 11th. Every other year the team has finished at or near the bottom third of teams in terms of total defense, and not surprisingly missed the playoffs each year. And not since 1992 has the team had a true top-five defense.

In fact, it has recently been difficult to discern the true hallmark or character of the Saints’ defense. They are neither a linebacker-driven team, like the old Dome Patrol, nor do they post an imposing front line like the Eagles, nor do they throw a myriad of confusing defensive schemes and have roaming, swarming defensive backs like the Ravens and Patriots. Despite some highlights and some truly hardworking and occasionally outstanding individual players, the franchise’s defenses in the last 15 years have stood for nothing and yielded to everything. Last year’s tepid efforts to shore up the defensive backfield with Jason David, its middle with Brian Simmons, and its front with Renaldo Wynn proved ineffectual at best (Simmons and Wynn) and disastrous at worst (David).

Lacking a driven and commanding quarterback the likes of Drew Brees, the offense wandered aimlessly for years until Sean Payton arrived and made a concerted effort to improve that part of the game. He generated a top-five offense two years in a row. Now, with defensive coordinator Gary Gibbs and new defensive line coach Ed Orgeron, Payton appears to be turning his talents for football renaissance to the defense, as this past April the Saints invested heavily in quality and quantity on the defensive side of the line.

Sedrick Ellis, out of USC, has been regarded as one of the best picks of the first round and also one of the best fits for the team. Ellis is a powerful, highly mobile, explosive player who, if he develops as expected, could help resolve one of the Saints’ most persistent problems: plugging up the middle against the run and simultaneously providing a heavy pass rush from that same defensive center. He is best known for his burst off the line, his balance, his agility and his capacity to keep moving toward plays behind the line. In short, he is a seriously potential disrupter, not unlike what the Saints acquired on offense with Reggie Bush in
2006. If the Saints use him in a similar way on defense, he will likely keep quarterbacks, running backs and offensive coordinators guessing. He could be a game changer for the Saints. With him, they now have a truly impressive front line, with three first-round draft picks (including Charles Grant and Will Smith) all potentially bearing down on offenses at the same time. It is entirely possible now that this team’s defense will become known for something, and that something would be its defensive front four.

After shoring up the middle with Ellis, the draft war room next called out the name of Tracy Porter from Indiana. Porter has excellent coverage skills, sub-4.4 times in the 40-yard dash, terrific instincts and a talent for breaking on the ball. He had six interceptions his senior season, while also returning punts with great effectiveness. It is possible he will provide a real shutdown and even scoring capability in the backfield, qualities for which the Saints may have additional need this year considering the lingering injury to Mike McKenzie. The Saints also signed vets Randall Gay and Aaron Glenn, so Porter will have company as a new face for the defense’s secondary.

The Saints’ next four picks were an amalgam of specialists devoted to generating the maximum value out of the minimal picks the modern draft permits. Fifth-round selection DeMario Pressley, of North Carolina State, fell into the second day, but his potential seems promising. He provides another youthful, speedy, agile yet huge body to give a surge in the middle of the line. The Saints’ sixth-round pick, Taylor Mehlhaff, can be interpreted as a defense-oriented player, as he had one of the strongest legs in college football, and he nailed 27 of his 77 kickoffs, over a third, for touchbacks. The Saints could not resist the temptation to reinforce the offense, so they added to the offensive line by selecting Carl Nicks and to the receiving corps with Adrian Arrington. Nicks is a 6’5″ 343-pound behemoth with huge upside from the o-lineman factory at Nebraska. Arrington, from Michigan (a receiver factory in its own right), was picked in the seventh round, and he has all the promise of Marques Colston (himself a seventh rounder).

In the end, Sun Tzu and Sean Payton may be correct. If the Saints have truly succeeded in building the defense in this draft, they could ultimately prove to be invincible.