An optimistic entrepreneur sees the world through New Orleans-colored glasses.

Stirling Barrett, founder of KREWE du optic, grew up in New Orleans and began his career in the art world early. “While I was in high school, I fell in love with art,” Barrett says. “It wasn’t my first introduction to the darkroom, but it was my first in-depth introduction.” 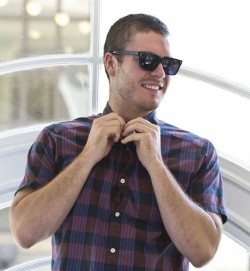 By the time the young photographer decided to attend the Meadows School of the Arts at Southern Methodist University, he had already earned recognition for his style, with one of his distinctive architectural collages appearing on a book cover.

After Barrett “got everything he could” out of college — namely, three fine arts minors and a creative advertising major — he hesitated before taking the next step in his career. “I didn’t think I was coming back to New Orleans, because I didn’t think it was a viable option,” he says. “It really did take me leaving New Orleans to understand how culturally rich our city is.”

He came home to pursue photography. Soon, despite having achieved considerable success for his age, he encountered the same problem faced by many artists: self-promotion was taboo, but waiting around to be “discovered” wasn’t a viable option. So Barrett took matters into his own hands. “I knew I wanted to be in the creative field and be more of an entrepreneur,” he says. He was planning to buy a house in the Bywater; instead, he used his down payment to form KREWE du optic, an eyewear company.

The spirit behind the KREWE brand combines two of Barrett’s longtime loves: New Orleans architecture and sunglasses. He knew a fair amount about the former, and almost nothing of the latter — so he threw himself into learning more. “Sunglass design is just the line and perspective of how the frame fits the face,” he says, describing how each of KREWE’s signature styles was inspired by a different New Orleans neighborhood. “The company was founded on the belief that what is old is new, and classic can be beautiful,” he says. “But at the same time, these are modern, iconic frames for individual style.”

Barrett hand-draws the first version of each KREWE sunglass design. Over the process of a few months, the design is redrawn with computer-assisted design, then prototyped, perfected and handmade in Italy. “Personally, I just want to have a sunglass brand based in New Orleans, representing New Orleans culture to the world,” he says. “I can’t wait for it to happen, and we’re well on our way.”

In April, KREWE du optic competed in the Idea Village’s Big Idea business pitch contest, which offered over $50,000 in funding to a local startup. The team made it to the top-three group of finalists, but Barrett says winning wasn’t the point. “Our goal was really not to think about the $50,000,” he says. “We wanted to reach as many people as possible and win the community.”
Along with aiming to place KREWE shades in 100 retail stores by the end of this year, including national, high-end department stores, Barrett hopes to expand his career in art photography. “I haven’t had as much opportunity to continue to develop new work,” he says. “I think it’s very important to have other creative outlets besides your business venture. It’s important to fill that well.”

The artist and entrepreneur is also thoughtfully anticipating New Orleans’ upcoming 300th birthday in 2018. He considers it a personal milestone, as well as a creative and economic landmark ushering in the city’s promising future. “I think we’re in a really interesting point in New Orleans as a whole,” Barrett says. “There’s definitely something special happening here.”