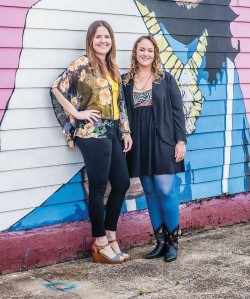 The origins of Collin Ferguson and Catherine Todd’s creative business venture, Where Y’art, were marked by serendipity. The two artists first met by chance at the Daze Between Festival in 2009, which takes place in the days between the New Orleans Jazz and Heritage Festival’s two weekends.

Ferguson, who creates feather headdresses and fascinators, had set up shop next to the poster sales booth, where Todd, a New Orleans native and graphic artist who created that year’s poster design, was selling posters. “All of a sudden, I saw this girl sitting next to me, promoting me as an artist,” Todd says. “Cat was very shy, like most artists,” Ferguson remembers. That was the first time the two would join forces to promote local artwork.

After they met, both women were searching for a way to make it easier to discover local artists and their work. Both came up with a similar idea around the same time. When they encountered each other again, this time on Frenchmen Street, Ferguson and Todd decided to create an online arts community — and the idea for Where Y’art was born.

As artists who both owned creative businesses, the partners were uniquely positioned to understand the needs of local artists trying to sell their work. Ferguson, originally from Alabama, had been involved with Burning Man and New Orleans’ own NOLABurners arts and culture association. A graduate of the Tulane School of Business, she realized that there was an opportunity to bring the same type of collaborative culture to the city’s arts scene. “Everyone takes care of the entire community,” she says. “I saw the possibility to do the same in New Orleans. That’s what my part of rebuilding is: a way that we can market the New Orleans art community to the world.”

At first, Ferguson and Todd aimed to create an online marketplace for artwork, but soon realized there was so much more to include. “What emerged were the stories behind these artists and behind these pieces,” Todd says. “That became the focus.” The founders conceived of a membership-based organization that would offer artists virtual gallery space, promotion and access to creative services that help sell artwork, including professional photography and styling. From a visitor’s perspective, the website would offer an opportunity to “interact with art in a different way,” Ferguson says.

Four months ago, Ferguson and Todd launched WhereYart.net, which invites visitors to read artists’ statements in their own words, browse artwork to create their own virtual “collections,” connect with artists on social media and, of course, purchase artwork. Soon, the website will offer even more options, including the option to message artists directly, and a “color picker” tool for interior designers to easily source original artwork.

Artists from every New Orleans neighborhood are involved, and their portfolios on WhereYart.net are linked to the physical locations where their work is sold. “We really believe in the community aspect of what this platform is,” Todd says. “We want to encourage people to approach us — ask us if you want to get involved! We are very open, and [it’s] a collaborative effort.” Kat Ryalls, the first artist to sign up with Where Y’art, has sold more than $80,000 in artwork since the website’s launch.

Last month, Where Y’art won the Downtown Development District’s Arts-Based Business Pitch, edging out four other finalists to receive more than $35,000 in grants and services. The partners see potential for the Where Y’art concept to expand, both in New Orleans and even to other cities. “We’re ready to get down to business, and start taking new artists in and figuring out what’s next,” Ferguson says.

1.35K
previous Hitting the Crossroads
next Frame by Frame