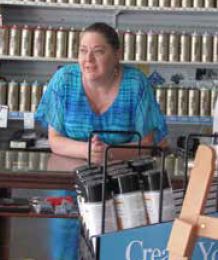 Lest you think that the now-commonplace ability to manipulate digital photography has supplanted the skill that goes into traditional, manual photographic processes, Steve Simmons would like to clarify.

“Everything we do goes through cycles,” says Simmons, who began photographing at the age of 21, and founded View Camera magazine in 1988. “When digital came along, that became the rage; now there’s sort of a throwback to these old processes and older-style cameras.”

One appeal of working with older photographic processes, especially large format, is the ability to create unique prints that can’t be replicated. “A lot of it is just the opportunity to go back, take your time, master a craft and do something that’s one-of-a-kind,” Simmons says.

Simmons recently juried the New Orleans Photo Alliance’s current exhibition, Four by Five, which features four large-format works by five photographers, on both sheet film and coated photographic plates. “The sizes can be anywhere from about four by five inches up to about 16 by 20 inches for a piece of film or a plate,” he says.

One of large-format photography’s unique challenges is the creation of a consistent body of work, without reliance on Photoshop or other digital editing. Since even two shots of the same composition won’t come out identical, Four by Five applicants had to carefully consider lighting, color and other elements to create a coherent set of photos. “It has more to do with the vision of the photographer; that’s what really comes first,” Simmons says.

Paring down a pool of 25 to 30 photographers who submitted work, Simmons selected Drew Bedo, Robert Dutruch, Mark Dawson, Maria Levitsky and Nate Mathews. The 20 photographs now on view at the Photo Alliance demonstrate the raw beauty and versatility of large-format media, from old-school tintypes and collodion-based works to inkjet prints from color negatives. neworleansphotoalliance.org

Still craving a good scare, even though Halloween has passed? Pick up a copy of Buster Voodoo by Mason James Cole, author of Pray to Stay Dead. Set in New Orleans before and during Hurricane Katrina, this eerie novel promises to keep you up late into the night — even after you’ve finished reading.

Cole grew up on the West Bank. “My attraction to the horror genre goes all the way back,” he says. “My earliest memories are of watching Universal’s Frankenstein and the BBC adaptation of Dracula, which aired on Channel 12 when I was three … for some reason, my mom deemed all of this perfectly acceptable family entertainment.”

As a teenager, Cole discovered Stephen King. “King was my bridge to fiction — not just to horror fiction, but to fiction in general,” he says. The celebrated horror novelist’s influence is subtly apparent in Buster Voodoo, especially in wrenching post-Katrina scenes that recall the vast, overwhelming despair of King’s The Stand.

The author makes a distinction between his two loves of film and fiction, noting that the genres differ widely in their approaches. “Horror movies have become the enemy of horror fiction,” he says. “They’re two entirely different things, but they’re conflated by the public. The ‘H-word’ hurts horror fiction sales, because the public hears ‘horror’ and thinks ‘slasher.’”

Buster Voodoo (Permuted Press, 2013) follows Dixon Green, an aging theme-park janitor, as he battles a menacing demon stirred up during his childhood in the Tremé. “Locals will experience Buster Voodoo on an entirely different level from your average genre reader — this is a haunted city, and, as you’ll see, this is an intimately NOLA book,” Cole says.

In the novel’s last pages, the arrival of Hurricane Katrina adds true-to-life visceral fear. “I wanted the supernatural aspects of the novel to be frightening, but I wanted the sequences that dealt with real-life horror to make the supernatural stuff pale by comparison,” Cole says. “No boogeyman can hold a candle to the horrors of humankind and the sheer, unstoppable terror of nature.”

Buster Voodoo is available in print online; locally at Octavia Books; and via e-reader — and Cole has plans for a sequel. masonjamescole.com
Maker Mecca: National Art & Hobby offers more than arts-and-crafts supplies.

As a kid, I begged to go to National Art & Hobby every time I saw a chance. Stepping into the Magazine Street shop — owned by the same family for more than 80 years — meant filling a basket with glass beads, pastels, paper, packs of molding clay and any other supplies I could convince my parents I needed.

The business began as Rauch Radio-Electric in 1931, and changed form over the years as ownership passed through Colonel Bernard Rauch’s family. When Rauch’s grandson, John Ward, and his wife Nathalie Nelson Ward took over, the shop changed its focus from hobby goods to fine-art materials and craft supplies. It’s become a destination for artists, Mardi Gras Indians and krewe members, college kids and parents alike.

Since John’s passing in 2010, Nathalie has been Art & Hobby’s sole proprietor. She works with several family members to help New Orleans artists, both established and aspiring, find what they’re looking for. “A number of things set us apart,” she says. “We really like what we do, and we really like our customers. We know our products, and are willing and able to answer most questions.”

For years, the shop’s Eleonore Street side has featured giant, colorful murals by local artists. “When it is getting to be time for a new one, we listen to the artist’s ideas, look at their style and choose someone we like,” Ward says. “Joseph Konert did the mural that is up now, and it is dedicated to my late mother-in-law, Marge Ward.”

The shop features a different artist’s work every month in one of its display windows. “We also have a community board, where local artists can put their business cards or pamphlets or art-class information,” Ward says. “Another way we support our local artists is to attend art openings. We show genuine interest in our customers’ art, and sometimes we become a sounding board for their ideas and/or worries.” Starting this month, the shop will stock art sets and other holiday gift items. facebook.com/nationalartandhobby