Catherine Collins shares the benefits of a strong Pilates practice. 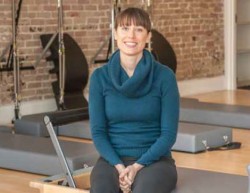 Crescent City Pilates owner Catherine Collins has always loved to dance. “I started tap-dancing when I was 5 years old, and I tapped all the way through high school,” she says. “I ended up going to school for religion and philosophy, but I still had a passion for movement and wanted that to be a part of my life.”

Her first Pilates class gave Collins a new kind of movement to love. When she got married, it happened that her new sister-in-law’s partner was a Pilates teacher. “She was also a dancer, and I was able to talk with her about her career path,” Collins says. “Once I was introduced to Pilates, I fell in love with it. I decided to go up to New York and take classes.”

In New York, Collins studied Pilates at the PhysicalMind Institute, working with teachers Lesley Powell and Doris Pasteleur Hall. “They studied under first-generation Pilates instructors,” she says. “They also had a background in dance and physical therapy, Feldenkrais and other movement modalities.”

Designed by Joseph Pilates in the early 20th century, Pilates is a whole-body movement system that incorporates elements of gymnastics, yoga, martial arts and other disciplines. “His idea was that if you could get the mind, the body and the spirit all balanced and working together, that you as an individual would live a long, healthy, prosperous life,” Collins says. “It’s a mixture of so many different approaches. The idea is to take the body and balance out the muscle structure, to bring it into alignment.”

When she returned from New York, Collins taught Pilates from her home. “After Katrina, my house flooded and my equipment went with it,” she says. “I actually ended up working for Erin Romney for six years.” In 2011, she founded Crescent City Pilates. “I’d always wanted to open up my own place,” she says.

On Staying Motivated: Old dance injuries caused Collins pain for years; Pilates has helped her eliminate that constant discomfort. “What motivates me is to work toward being strong and healthy so I don’t feel in pain,” Collins says. “Balance is really the big thing for me. By being in alignment, I find it makes me aware of how I feel internally … It creates such an awareness that I don’t think I would otherwise have. It’s really changed my life.”

Her Fuel: “My diet has shifted over the last few years,” Collins says. “At the moment, I really think about clean eating — I know it’s a buzzword.” She chooses whole grains and vegetables over processed foods, teaching her two sons how to read nutrition labels and choose healthier options. “At the same time, I allow my children to have ice cream,” she says. “Allow yourself to be decadent once in a while. Too much of anything is not a good thing.”

Client Success Story: Collins often works with clients who have injuries or chronic conditions, like spinal stenosis (narrowing of the spinal column) and diastasis recti (a separation of the abdominal muscles). “A lot of my clients have stayed with me for a long period of time,” she says. “They’ve found that being in the studio, their pain has gone away … We just make it a practice. It’s daily. Pilates isn’t just an exercise that you do; it’s a way of life. It’s how you live.”

Wise Words: “Pilates will take you at any place you are in your fitness, and I think that’s what’s so great about it,” Collins says. “You don’t have to be flexible, or strong, or have any knowledge of exercise or the body.” She advises those with long-term injuries to check with a doctor before beginning a new exercise program. crescentcitypilates.com