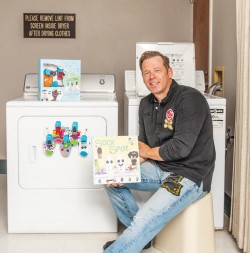 The one lonely sock left tumbling around in the dryer, or found clinging to your pajamas, could be a lot more than a simple annoyance. That was Neil Pierson’s thinking. “My dad had this funky device in the laundry room that held a single sock when you couldn’t find the other,” says Pierson, who grew up in New Orleans. “We laughed about it, but it worked — that single-sock scenario is frustrating, and it reoccurs.”

Fond memories of finding socks and escorting them to their place in the laundry room inspired Pierson to create Sock Spot — a similar gadget that can be mounted anywhere in the house to collect and keep track of single socks. “When I had my kids, I said, ‘I need that thing,’” Pierson remembers. “‘I want that thing.’” He and his wife, Jan, decided to throw themselves into making and marketing Sock Spot, which they began selling this summer.

Aimed at kids and families, Sock Spot is not just a fun tool to keep track of socks. “It’s about taking part in the household, and pitching in,” Pierson says. “Personal responsibility, organization, tidiness, respect for your personal belongings.” The product comes with an illustrated children’s book featuring characters that Pierson created with his friend, art teacher Derek Cummiskey. With names like Couyon, Tiboy and Lay Zey, the colorful animal characters have the flavor of southern Louisiana. “I told Derek what we were doing, and he was on board immediately,” Pierson says. “We wanted original characters, with something about each character that makes them unique. We wanted to give them Louisiana names.”

Sock Spot also comes with online educational materials — and a jingle that kids love to sing. “We just want to touch each family, and sow the seed in the little ones,” Pierson says. “We’d love to teach a generation.”

Along with helping kids learn organizational skills and responsibility, Sock Spot will spread autism awareness and education. “My wife has been an advocate for my son, who has autism,” Pierson says. “He got a diagnosis around seven years ago, and she’s done a fantastic job.” Their daughter also has been supportive of her older sibling. “When you have a special-needs brother, it’s a difficult circumstance for a child,” Pierson says. “She steps into that caretaker role really beautifully — it’s something I haven’t asked her to do, but she just does.”

Though autism awareness has grown in recent years, Pierson knows there’s a long way to go. “Some people’s only comparison is Rain Man,” he says. “But there’s so much more to it than that. Autistic kids are fascinating and beautiful. It’s not easy [for them] to be in their world and live in ours.” Sock Spot is working with Autism Speaks, a large nonprofit based in New York, and local charities to improve autism awareness.

In less than six months of being on the market, Sock Spot has gained fans throughout the United States. “The reception has been phenomenal,” Pierson says. “We worked so hard on it, and I will never get tired of hearing that it’s a great idea. The fact that it’s working, and kids are responding and singing the jingle … We love the reports back.”

The startup will soon test its book-and-toy combination at local Barnes & Noble stores, with high hopes for the collaboration. Sock Spot is also available in local stores and on Amazon. “If this company succeeds, I want it to succeed for autism,” Pierson says. sockspot.com

1.35K
previous Mexican Revolution
next All in a Day’s Work