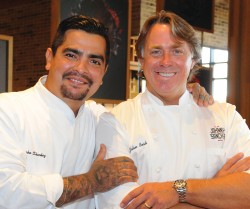 Baltimore got to taste Johnny Sánchez first — but now, New Orleans has the opportunity to try the taqueria, too. The modern Mexican eatery is a collaboration between John Besh and Aarón Sánchez, two chefs whose lofty reputations and long resumes precede them. Diners in both cities, looking for fresh, authentic Mexican food made with local ingredients, are flocking to the pair’s first joint venture.

Besh and Sánchez first crossed paths when Sánchez was just a teenager interning with chef Paul Prudhomme in New Orleans. Years later, they competed against each other on the Food Network’s Next Iron Chef — and this time, they stayed in touch despite packed schedules. “A lot of times, we’ll get together and we cook, just as friends,” Besh says. “We’re at my house, the hunting camp or fishing camp, or we’re at the beach.”

Often, these get-togethers involve Mexican food, which Sánchez grew up cooking and eating. “It always comes down to, eventually, at some point, we’re cooking with his ingredients,” Besh says. “Or, we’re using my ingredients — but they’re in a tortilla.” Sánchez’s mother, Zarela Martinez, is a restaurateur and cookbook author who ran her own restaurant, Zarela, in New York City for nearly 25 years. “My mom being a renowned chef obviously had a huge influence on me,” Sánchez says. “My heritage really plays a huge part.”

After working together at charity events, including hosting wildly successful “taco party” fundraisers, Besh and Sánchez got the idea to take the taco trade full-time. “We thought, ‘We ought to do this for a living!’” Besh says. In August, they opened Johnny Sánchez at the Horseshoe Casino Baltimore, following that up in October with a location right in the middle of the hustle and bustle of New Orleans’ business district.

Despite their different culinary backgrounds, both chefs stress that Johnny Sánchez is not fusion cuisine. “The one thing that, initially, people thought it would be was a Louisiana-Mexican restaurant, and it’s actually not,” Sánchez says. “It’s a straightforward Mexican restaurant from the way I grew up.” The two chefs work side-by-side on recipes for the restaurant’s ever-evolving menu, incorporating fresh, local produce and seafood. “What’s awesome is that it’s the collaborative effort of two artists,” Besh says. “I learn from him, and he learns from me.”

Besh has also enjoyed channeling his enthusiasm for local ingredients into items he’s never used, including 20 different kinds of dried chili peppers, and exploring new styles of cooking with salsa recipes that call for charring vegetables at 1,100 degrees Fahrenheit. “In French training, you don’t burn things — that was something I really had to get over,” he laughs.

Here in New Orleans, most restaurants cater to a population of locals and tourists who know more about food than the average American. Playing to these knowledgeable diners, Besh and Sánchez are a little more adventurous with their ingredients; they offer a few foreign flavors that may be new to even the most seasoned palate. “We do a little more challenging, more authentic dishes here,” Sánchez says. “We have Oaxacan grasshoppers as a garnish in our guacamole.” Though you’re welcome to order the appetizer sin chapulines, Sánchez suggests giving the guacamole a try. “It’s something new; it’s a textural component,” he says. “Imagine when people first started eating turtles down here.”

Both chefs agree that their collaboration has resulted in outstanding dishes, without sacrificing the convivial atmosphere so essential to Mexican culture. “The food, bite for bite, might be some of the best food I’ve ever had in my life,” Besh says. “We wanted to create a restaurant that both kind of shared a sense of hospitality and warmth, which both Aarón and I enjoy, and [that] had really serious food.” Sánchez adds, “We really wanted it to be something where people could come in large groups and not feel that pressure.”

That’s not to mention the Johnny Sánchez bar, which supports the menu with a selection of tequilas (Sánchez’s preferred spirit), bourbons (Besh’s drink of choice) and cocktails that can be created equally tastily with either. “Some of these tequilas are so great — so unlike the tequilas of my college days,” Besh laughs. “They’re very refined.”

With its emphasis on authenticity and hospitality, the restaurant is also a reflection of New Orleans’ diverse Latino population — especially its community, which grew significantly post-Hurricane Katrina. “We’ve had Hondurans, Nicaraguans, El Salvadorians and Panamanians here for years, but not much of a Mexican community, and that continues to change,” Sánchez says.

When they’re not filming TV shows or managing their other ventures, you’re likely to find Besh and Sánchez at their restaurant, enjoying what they’ve built. “Right now, we’re just so new,” Besh says. “New Orleans is my home. I just want to make it right.” Sánchez, who divides his time between New Orleans, New York and California, may soon buy a house in the Crescent City. “I love it down here,” he says. “I love the soul of the people.” johnnysanchezrestaurant.com

452
previous Pride and Joy
next On the Spot