A local OB-GYN specializes in hands-on treatment to help pregnant patients with aches and pains. 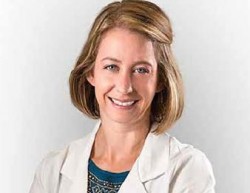 Originally from Phoenix, Dr. Tara L. Morse didn’t see herself becoming a physician until she took a class in college that exposed her to different types of medical schools. “I thought I would follow in my father’s footsteps and become a teacher,” she says. “That’s kind of what we do as doctors — combining love for science and health with teaching.”

Dr. Morse earned her medical degree at Iowa’s Des Moines University College of Osteopathic Medicine. “The school was what you think of as your traditional, medical school-based practice,” she says. “But we were also taught osteopathic manipulative medicine, which is a form of … manipulation of your bones and your body structure to help with disease processes.”

In search of a field that offered opportunities to pass her knowledge on to patients, Dr. Morse decided to specialize in obstetrics and gynecology. After taking a friend’s advice to visit New Orleans, she moved here to do her residency at Louisiana State University Health Sciences Center. “I came down here on a whim,” she remembers. “A friend told me I’d really like it. I was probably that hard-headed transplant.”

Now, she sees patients at Crescent City Physicians’ Bienville Street and St. Claude Avenue clinics, where she often uses massage techniques in tandem with musculoskeletal adjustments to help pregnant patients with aches and pains. “I can actually teach my patients or their partners,” she says. “There are so many patients that want to educate themselves about birth. I really support my patients in trying to keep them educated and learning.”

Dr. Morse points to the da Vinci Surgical System — a robot — as one advance that’s made gynecological surgery easier. She also sees more patients taking an increased interest in their birth plans. “Women are much more involved in their childbirth process,” she says. “With the advent of blogs and social media, women can access so much more information … We’re trying to make that birth experience more pleasurable and align it with their choices.”

She welcomes patients who are searching for a nonconventional birth experience, helping them stay healthy during pregnancy, while respecting their dietary choices and birth plans. “Patients like that I’m very open-minded to some of their views — wanting to have a doula, being a vegetarian or vegan patient,” she says. “I have two vegan patients right now.”

The best part of her job, Dr. Morse says, is watching her patients’ families grow. “Being able to be a physician, and having family members allow me to be a part of the birth and the start of their family, is such a privilege,” she says. “That’s one of the most beautiful things.”

3.42K
previous Top Ten Places to Get Fit in 2015
next Dr. Benjamin Springgate