A local architect creates symmetry and stability in his work and life. 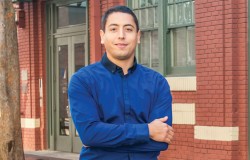 As George Santayana once said, “Those who cannot remember the past are condemned to repeat it.” This quote, often paraphrased and variously attributed to Santayana, Winston Churchill and other thinkers, becomes especially interesting when applied to the field of architecture. Architects strive to create functional, beautiful structures while simultaneously respecting tradition and context; in this way, they build on the past to improve the future.

This equilibrium, says local architect Karl Bernhard, is one of the primary challenges of his discipline. “I think I look more at the future than the past,” he says. “But you always have to acknowledge the past to get where you’re going.”

A native New Orleanian, Bernhard became interested in architecture as a child while visiting plantations with his parents. “That always fascinated me, and I wondered how those things came to life,” he says. “I started young, drafting and dreaming.” He studied architecture at the University of Louisiana at Lafayette, graduating in 2004. He spent another year working at ULL, but, when floodwaters laid ruin to New Orleans, he felt called to return home. “I came back to New Orleans after the storm to help heal the city,” he says. In 2005, he joined architecture firm Sizeler Thompson Brown, where he’s worked ever since.

Helping rebuild his hometown was a profound experience. “It brought a lot of meaning to the profession,” Bernhard says. “It was something that was healing the city. At this point, the city’s growing beyond what my expectations were — and I think it’s just going to evolve into a city of the future.”

Although computer-aided design technology offers immense assistance when it comes to modeling structures, Bernhard stays hands-on as much as possible. “I try to jump away from the computer as much as I can, using hand drawings to sketch out ideas,” he says. “I think it’s really important to get in touch with that raw way of producing ideas.” He also enjoys visiting in-progress projects to see his ideas come to fruition. “That’s one of the most gratifying things — week by week, going to the site and seeing how these ideas are starting to become a reality,” he says.

Dispelling the myth of the architect as aloof artisan, Bernhard emphasizes the importance of communication with clients. “The architect can be only as great as his clients,” he says. “There’s not enough credit given to the clients themselves for their vision and their ability to work with the architect, and vice versa.”

To balance the rigorous precision of his architectural work, Bernhard paints. His colorful canvases often feature figurative abstractions, and they sometimes evoke stained glass. “I don’t like to think of styles and classes when I paint, but there’s this one called ‘psychic automatism,’” he explains. “You’re drawing, and your hands are moving, and it’s almost like your subconscious is doing the work for you.” This organic process is a “form of therapy” for Bernhard, with no rules or limitations.

As the architect’s portfolio has grown over the last decade, so has his confidence. “I’m at a point in my career where I feel like I’m starting to form some sort of identity,” he says. “It’s been about 10 years that I’ve been working now, and I’m starting to become more comfortable at my profession, which is allowing me to express myself a little more … As far as projects go, I’m looking forward to meeting new clients who will inspire me. And in the end, we’ll create a building that will inspire our community.”