Nichole Doyle stays on the ball as owner of the New Orleans Krewe. 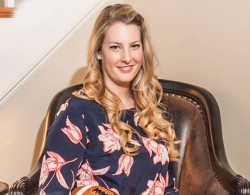 Sports and fitness have been the gateway to some of the best parts of Nichole Doyle’s life, providing her an outlet when she needed one. “My background growing up … sports kind of changed my life,” she says. “It was there for me when my home life was kind of crazy and abusive.”

Originally from a small town in California, Doyle played soccer throughout childhood and adolescence. She found comfort and stability in her friendships with teammates. “They become a second family, in a very positive atmosphere and environment,” she remembers. “When I moved on, I started doing personal training and really helping others change their lifestyles.”

Doyle took a position as a group fitness director for a prestigious country club in Richmond, Virginia. In Richmond, she met the man who would become her husband; five years ago, the couple moved to his hometown of New Orleans. Doyle continued working as a personal trainer and kept up with her own fitness in the meantime, which led her to discover a brand-new passion.

“I was jogging one day in City Park, and I ran by a van that said ‘Women’s Full-Tackle Football,’” she remembers. “I was like, ‘What is that all about?’” She memorized the phone number printed on the van’s side and called it when she got home. Soon enough, she was attending conditioning practices for the New Orleans Mojo, an all-women, full-tackle football team and member of the Women’s Football Alliance.

For Doyle, a major NFL fan, joining the Mojo as a tight end “was probably the coolest experience of my life,” she says. But, in the very next breath, she bluntly acknowledges the challenges of women’s teams. “The problem with women’s football is that it’s just not popular,” she says. “I really think there’s a niche of fans out there to support the game, but it’s just hard to promote. It’s hard to get players.”

After a single season, New Orleans lost its Mojo. Like many women’s football teams, the team folded to high financial pressures and small audiences. But Doyle was determined to stay on the field. In 2014, she founded the New Orleans Krewe as a new member of the Independent Women’s Football League, which boasts established teams throughout the South.

Having recruited a roster of dedicated teammates, Doyle makes the point that women’s semi-pro football players are not compensated. Nor does the league provide medical coverage for injuries. “I’m not a big ‘I am woman, hear me roar’ person,” she says. “But I do find that with the physicality of football — these are girls who really love the game. They really love the game, and they really understand it.”

Though she knows it will be a challenge, Doyle has a plan to keep her Krewe rolling. She’s considering holding “theme nights,” like the New Orleans Zephyrs do, to attract different types of audiences to come watch women’s football. She’s also pursuing sponsorships from area businesses to help offset the costs of running the team. “We really have to be unafraid to ask for things for free,” she says. “My budget is about $20,000 for a whole season, including equipment; travel; any kind of marketing we may do; uniforms and use of a field. I started with zero.”

The IWFL season begins in April and runs through June, with league playoffs taking place in July. “We just really want the community’s support,” Doyle says. “We would love the community to come out and support these women. Even the little girls in the stands — they can come out, and watch and play tackle football.”

As a personal trainer at Chronos Body, Health & Wellness, not to mention being a mom of three, Doyle says she sets her own schedule. “It’s a long day,” she admits. “Sometimes I go teach a spin class at 5:45 am, and I have three or four fitness assessments.” That’s all before practice, which takes place two nights per week and on Saturday mornings. “But when I put my head down at night, I’ve accomplished a lot — and that’s my whole goal.”