Home IN THIS ISSUE Garrett Grayson: The Saints Start Planning for the Future
IN THIS ISSUE
SPORTS
May 31, 2015 Paul Wegmann 0

Garrett Grayson: The Saints Start Planning for the Future

Summer brings certain changes, which we all recognize as signposts of renewal — the fecund bursting of leaves and flowers, the sunshine and, of course for the football fan, training camp. It arouses the familiar sensation that the cycle of change is beginning again. In the NFL, this means the start of OTA’s (organized team activities), and the first hints of what is to come in the fall. 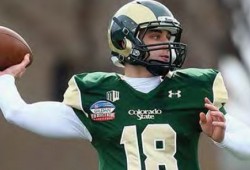 Most notably for New Orleans in 2015, the players drafted in the Saints’ 2015 draft will be making their first forays onto the field, unveiling the talents that encouraged the Saints to pick them and ask that they join the mission to reach the Super Bowl. Despite this yearly rite, one aspect of Saints football that has remained immutable since 2006 has been the stalwart, keystone presence of Drew Brees. He has been what every franchise seeks in a franchise quarterback: He’s a record setter and a fierce leader; he has a carpe-diem attitude when situations appear most dire; and he’s an upstanding, likable and charitable citizen of the city.

It appears that Brees could play another five years, or he could choose to retire to the good life he so richly deserves when his contract expires two years from now. It is into this gray area that Garrett Grayson humbly enters. As the Saints’ third-round selection in the 2015 NFL draft, the 75th pick and the third quarterback chosen overall — at six-feet-two-inches and 220 pounds —Grayson carries the classic frame of the prototype, modern young quarterback.

As a senior playing for the Colorado State Rams, with the eighth ranked passing offense in the NCAA last year, Grayson was the 2014 Mountain West Conference Offensive Player of the Year having completed 270 of 420 passes (64.3 percent) for 4,006 yards and 32 touchdowns in 13 games, and having established or tied 16 school records over his career, including passing yards (9,190), completions (688) and touchdowns (64). The yardage total was a school record and the fourth most in college football, and his 308-yards-per-game passing ranked ahead of the NFL’s first and second overall picks, Jameis Winston and Marcus Mariota. In short, Grayson has loads of what the Saints’ brain trust absolutely loves from its players: production.

But the question is in the timing: Why pick a quarterback so high now, at this juncture? The Denver Broncos selected Brock Osweiler in the second round three years ago as an heir apparent to Peyton Manning, and the New England Patriots did the same, selecting Jimmy Garoppolo as the supposed heir to Tom Brady, also in the second round, last year. They both remain the backups in waiting for their respective teams; there is no set time frame for when a Hall of Famer finally turns in his playbook.

As Sean Payton explained after the draft, “I understand the story, certainly, with where Drew is in his career, but you truly try to pay close attention to how do these grades fit; … if there’s a need or you want to bring in a young player, I think it is important that it fits the grade. … We graded him as a late second, and, forget applying the grade, you’re trying to manage the draft that way, but we really came back from the workout like this is a guy that we’d like to have and would like to see him compete.”

Payton could not contain his optimism: “We really liked this player.” As has occasionally been the case with some of their better sleeper picks, the Saints attended a workout by Grayson at Colorado State without the press or other teams taking much notice, and came away impressed, as Payton explained, “He is accurate. It was good. It was really good. That is good news. A lot goes into that position, the makeup, presence, decision making — [offensive coordinator] Pete Carmichael, [quarterbacks coach] Mike Neu, those guys spent a ton of time, our scouts, on looking on film. It is one thing to look at a highlight tape, but, to really go back and look at the season, a tedious look at last season and then go see the player in person, work them out. A lot goes into a decision like that, and the things we are looking for, he appears to have that. I am anxious to see him come in and compete. And I mentioned this earlier, it will be, first off, the work ethic of the guys ahead of him, the way they train, the way they study, all of those things will be different from a college player coming in specifically with that group.”

And the enthusiasm seems to be mutual, as Grayson seems genuinely thrilled to have been drafted by the Saints and at the prospect of being Brees’ understudy, stating, “I said all along through this whole process that New Orleans was one of my dream teams to go to for that exact reason. … As a competitor you want to come in and compete right away, but I wanted to go to a place where I was going to have a spot behind an NFL Hall of Famer potentially. So this is honestly just a dream come true for me. I am beyond excited to be a part of the Saints organization.” As for the heir apparent label, and the burdens and expectations that can bring, Grayson seems to possess a humble, workmanlike attitude, stating, “He’s an NFL Hall of Famer in my book. I’m just extremely excited to get behind him and learn as much as I can. I hope to learn as much as I can to prepare me for the next couple of years. … I am coming to compete like a starter, like anybody should. But I have no problem sitting behind a Hall of Famer like Drew Brees and learning. I have no issue with that. I’m not just saying this, this is really a dream come true for me.”

236
previous Of A Generation
next Summer and Sno-balls