Idina Menzel: All the World’s a Stage 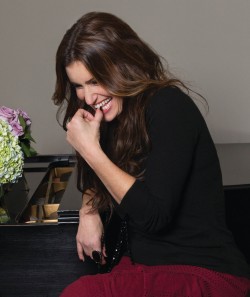 Spellbinding, charismatic and immensely talented singer, actress and superstar Idina Menzel has entertained the world with her myriad and unmatched talents ever since she graced the stage as Maureen Johnson, a bisexual performance artist in the pioneering and Pulitzer Prize-winning Broadway musical Rent, for which she was nominated for a Tony Award in 1996. She then gained massive critical acclaim and won a Tony Award in 2004 for her brilliant performance as the misunderstood green-skinned Elphaba in the blockbuster original Broadway musical Wicked. Menzel’s return to Broadway in 2014 in the original cast of the musical If/Then as Elizabeth Vaughan, intent on rebuilding her life in New York, garnered her serious praise and her third Tony Award nomination. And on July 30, New Orleans will experience the Menzel magic at the Saenger Theatre during her world tour for one exciting and memorable night.
A gorgeous vocal powerhouse blessed with an undeniable charm, uncanny wit and the intoxicating ability to move audiences through a mighty range of emotions, Menzel is a lover of multiple musical genres, including pop and jazz. Concert-goers for this tour in Asia, Europe and North America can count on Menzel to deliver an amazing and possibly even surprising show.

“It’s important to me that every city feels like they got a show special to them, whether that’s changing the set list, or even just hanging out, and talking to the audience and spontaneously telling a story,” Menzel says. “The Saenger is so beautiful, and the venues are getting bigger.”

For example, Menzel’s virtuosity was on full display when she sang the National Anthem at Super Bowl XLIX in February — the most-watched show in U.S. history thus far. “That’s wonderful, but I want to maintain an intimacy with the audience,” Menzel says. “That’s hard to do, but, if I treat the stage like it’s my living room and have a real conversation with the audience, then it’s possible.”

In addition to the Broadway tunes that she’s helped make famous and some of her favorite classic pop songs, Menzel may reach into her personal catalogue for material to perform during this new tour. “There are special fans that have always supported my original music, so I might pull out something from an early album just for them,” she says. “There’s a handful of songs I’ve always wanted to sing that I’d like to try new interpretations of. And there may be an original song I audition, since I’m in the studio working on a new album for next year.”

Menzel is a fervent songwriter with an impressive recording career; in addition to performing on cast albums, her repertoire includes the solo albums Still I Can’t Be Still, Here and I Stand. “I get into a room with the people that I love to collaborate with, and I put my heart and soul down, and come up with some melodies and lyrics; this is what I do as my creative outlet,” Menzel says. In 2012, she released the CD and DVD Idina Menzel Live: Barefoot at the Symphony, which also aired on PBS. Last October, her Christmas album Holiday Wishes received astounding reviews and made its debut at No. 1 on Billboard’s Holiday Albums Chart and was the first Top 10 album on the Billboard Top 200 Album Chart for Menzel.

Menzel has a fabulous track record in film and television as well; her credits include starring opposite Amy Adams and Susan Sarandon as Nancy Tremaine in Disney’s movie Enchanted, and appearing in the recurring role of Shelby Corcoran, Rachel’s (Lea Michele’s) biological mother, on FOX’s smash hit series Glee. And it is Menzel’s voicing of Elsa in Disney’s Oscar Award-winning giant of a movie Frozen, the highest-grossing animated film of all time, that has turned her into a household name. The film’s signature hit song “Let It Go,” sung by Menzel, became an international sensation. It won the Oscar Award for Best Original Song, which Menzel performed at the 86th Annual Academy Awards, and it also won a Grammy Award for Best Song Written for Visual Media. “Let It Go” climbed to No. 5 on the Billboard Hot 100, making Menzel part of history when she became the first person with both a Tony Award for acting and a Billboard Top 10 Hit. In December, Menzel was bestowed with the first-ever Breakthrough Artist of the Year Award at Billboard’s annual Women in Music Awards.

With a swarm of estimable awards, opportunities and accolades, the phenomenal chanteuse with the commanding, soaring voice remains grounded, authentic and down-to-earth. But while much of the planet’s population became immediately enthralled with “Let It Go,” she shares that her 5-year-old son Walker isn’t quite as enamored.

“Anything dealing with Frozen and Mommy singing is an imposition for him,” says Menzel, who juggles plenty as a devoted mom with a demanding work schedule. “It’s Mommy’s work, and it means Mommy’s not spending enough time with him. I took him to school this morning, and we always listen to music. He’s into Guns N’ Roses and electric guitar lately, and a song of mine came on the playlist by accident. I said, ‘Ah! I’m going to change it. Don’t worry,’ because normally he’s like, ‘I don’t want to listen to Mommy!’ But it was ‘River’ from my Christmas album, the Joni Mitchell song, and he seemed really engaged. So I let it stay on, and then he burst into tears at the end of it — saying he was going to miss me all day and that he missed his Daddy (Menzel’s former husband actor Taye Diggs). So it was interesting; as much as I think he doesn’t like my voice, I guess it really touched him in some way!”

Menzel’s dedication to children extends beyond her important role as a mother; in 2010 she realized a lifelong dream and co-founded A BroaderWay Foundation, an altruistic organization that offers girls from urban communities a creative outlet for self-expression, self-esteem and personal achievement through arts-centered programs led by volunteer theater pros. “A BroaderWay means a lot to me, because it’s my passion,” Menzel says. She interacts with the participants as a drama and vocal coach at Camp BroaderWay, where the girls are immersed in both traditional camping pastimes and in dance, stage and voice activities for two weeks in the Berkshires at Bard College at Simon’s Rock. Menzel also serves as mentor to the girls year-round.

“These girls teach us so much about life, courage and the risks that they take, so it’s really quite a gift that they give to us,” Menzel says. “We’re going into our fifth summer, and we’re really starting to see the effects that it has on all of us — and we’re really proud of it. With a non-profit, in order to raise money, you must be able to document how the foundation is changing lives. What’s wonderful is that it’s a four-year program, and our inaugural girls have graduated; many are coming back as counselors in training. Keeping in touch with them throughout the year, and taking them to museums and to the theater is our biggest goal right now — so that we can connect with them, because that 10-day magical experience can be quite a letdown when they leave and go back to their lives. It’s important to check in with them so they know they’re not forgotten.” For her humanitarian work with A BroaderWay, Menzel was named a Variety Power of Women New York Honoree in 2014.

It’s no surprise that Menzel, who grew up on Long Island, was bewitched by summer camp as a child and enjoyed the thrill of reinventing herself outside of school. “I was always singing ever since I can remember,” says Menzel, whose harmonizing to “Cats in the Cradle” at camp wowed her counselors. She continued to focus on music at Syosset High School, and she worked as the lead singer in a wedding band. Menzel graduated with a B.A. in drama from New York University’s Tisch School of the Arts. The beguiling, heartfelt way that Menzel approaches her roles have contributed to her characters’ iconic rise. And while she looks forward to new projects, she always carries a little piece of her characters with her.

“I think each character has created an era in my life and helped me evolve as a human being,” Menzel says. “I learned so much from those projects. Each one sort of incrementally adds to who you become as a person, an artist and a mother. I may not realize it all the time, but I guess there’s a pattern in all the characters of embracing this real power that we have, especially as women, and celebrating and harnessing it, and not taking a step back but really stepping forward and taking risks.”

On this visit to New Orleans, Menzel plans to indulge. “Oh my gosh, I’ve never had enough time in New Orleans,” she says. “I’ve been there once or twice, in and out, so I’m really looking forward to it. I’d like to go for a great, great gluttonous meal! [Laughs] I want to go around in the heart of the city and listen to music, obviously. Probably after the gig, I’ll go out late with my band and go listen to some great local players. That would be fun!”

With such a magnificent and diverse career that spans stage, music, film and television, Menzel has much to look forward to after her tour, especially with a Frozen sequel in the works. “I’m excited about the Frozen 2 movie,” she says. “They’re in the early stages now, writing the script. To be a part of the Disney family is amazing.” While nothing is definite yet, it’s probably a safe bet to say that Menzel will once again voice Elsa and continue to entrance audiences all around the globe. idinamenzel.com, abroaderway.org