A journey through Hurricane Katrina and postpartum depression became a saving grace. 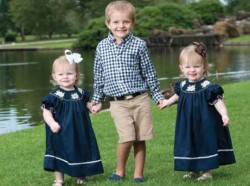 Unbeknownst to me, New Orleans took hold of me long ago and seared itself into my being. I am it, and it is me. This city has taught me resilience and strength in the face of uncertainty.

Recently, I attended a patient-centered conference for women affected by perinatal mood disorders in Boston. The weekend was full of hard work, happiness and skeletons making their way out of deep, dark closets. Hearts were full, and wounds were opened and closed.

I’ve been pretty open about my struggles with postpartum depression and anxiety since I was diagnosed in 2010; I wanted others to know that they weren’t alone and that treatments were available to them. Having the disorder doesn’t mean a life sentence — that you won’t ever be you again — or that you won’t bond with the people in your life that are important.

While I was away, I missed my three children and their dad, but I knew I needed to take some time to do something I believed in. I wore shoes covered in a print of the streets of New Orleans — the other part of me I knew I’d miss while I was gone.

As I walked around Boston in those shoes, I felt the same presence of togetherness and resilience that we have felt here in New Orleans, in ebbs and flows, over the last 10 years. I know, the people of Boston know, and those of us that love this city know: You never grasp what you have until your world has imploded. But you pick up the pieces, even when the deck is stacked against you, and you just do it.

When the country asked if we should rebuild, there was never a question in the minds of the people whose hearts resided here. The answer was, absolutely. We didn’t know how; we didn’t know when; and, maybe, we couldn’t always articulate why. We just did it. Although the questions are fewer and farther between, there are always the few that stop me in my tracks.

How are you going to raise kids in New Orleans? Isn’t it dangerous? What if another hurricane comes?

How did you find the courage to share your story when it’s such a taboo topic? Aren’t you afraid of what people will think of you? How did you have twins after going through postpartum depression once already?

When people ask how, we tell them: I don’t know, I just do it.

I didn’t know until the end of my trip that my hotel was a half block from the Boston Marathon finish line on Boylston Street. I made a point to walk by it before I left. I was unsure what I was hoping to see, or feel, but I felt the familiar pull I sensed for the first time in September 2005.

That pull brought me to tears each time I hit a landmark on my return. The 219 miles from my college campus to the Orleans Parish line were too far from that moment on, and I knew that I couldn’t live anywhere else. I lived for firsts: the first Mardi Gras and the first time I saw the Japanese magnolias blooming again. Now, every time I watch my 4 year-old devour a sno-ball, or dance at Jazz Fest with a twin on each hip, I am reminded of all the reasons I am right here, right now. I’m watching my battles with depression and anxiety in the rearview mirror — I can still see them, but, every day that passes where I allow the joy to surround me, it gets a little farther away. Every day the spectrum of success widens for New Orleans; instead of looking down into the funnel, we’ve been able to flip it like a makeshift telescope. Every time we dance in the streets, we make that happen — together.

Standing there on the finish line, just for that moment, in a city that also understands resilience and togetherness, I felt whole. This journey was my marathon, and there my babies were at the end, waiting for me, despite my faults and my struggles. We had made it, together, and we would continue — my little family of five, my city — stronger than ever.