Beauty and Brains on Bravo

Necar Zadegan sizzles in season 2 of Bravo’s Girlfriends’ Guide to Divorce and supports rescue dogs through her alliance with the Louisiana SPCA. 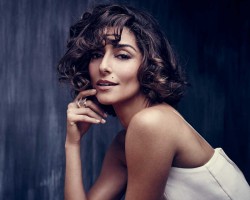 Bravo’s popular TV show Girlfriends’ Guide to Divorce is set to begin a brand new chapter, and captivating actress Necar Zadegan is excited about reprising her role as powerhouse divorce attorney Delia Banai. The network’s first original scripted series is a drama based on the Girlfriends’ Guides book series that tracks the life of self-help book author and guru of all things family Abby McCarthy (played by Lisa Edelstein), who shocks the world by revealing that her perfect career and marriage are not all what they seem. In her 40s and facing divorce, Abby turns to her single friends for advice. Season 2 kicks off on Dec. 1 and Zadegan loves being part of the fun, relatable show — developed by Marti Noxon — that features well-developed characters and is surprisingly sophisticated, witty and deep.

“It’s kind of a celebration to watch it,” says Zadegan, a gorgeous actress who is heralded as one of the most electrifying talents in Hollywood today. “It’s more than what it seems on the surface, and that’s why I like it. People love the hair and makeup on the show, but I think they’re really drawn to the genre, which is dramedy. The show is called Girlfriends’ Guide to Divorce, and the starting point for Abby, the title character, was this great divorce that brought this team of people together, but this show is about relationships and love, and love is the greatest mystery of life.

Relationships are hard, and, if they weren’t, more people would be in them. Love is a simple idea off the bat, but, in reality, it’s always complicated, right?”

By virtue of Delia being Abby’s divorce attorney, the characters have become close to one another. “The line between attorney and friend becomes blurred, and it becomes more than a business relationship for them; they genuinely start to care about each other,” Zadegan says. “I love watching these types of shows. It is so wonderful to have your girlfriends! I hate to say it, but men and women are different, and women love their girlfriends in a very special way, and we can talk to our friends very deeply at levels that men can’t relate to all the time, although I think they wish sometimes they could!”

Since Zadegan plays a divorce attorney, it is interesting to view relationships — many of which are falling apart — from her character’s perspective. But during the last episode of Season 1, Delia was proposed to by her billionaire love interest, Gordon Beech, played by actor Matthew Glave. “It’s a cool window into the themes of the show, and now my character is planning a wedding,” Zadegan says. “I like the storyline; he owns his own fashion design company and her business is divorce, but here she is finding love and getting married. People fall in love in the strangest places, and here it’s at a divorce law firm. She represented him in his divorce last season, and, the focus was on the taboo of their love affair, but this year it begins as a celebration of the two of them deciding to take the leap. Of course the girls look fabulous, and Delia’s engagement affects their friendships on many levels; they fight, and make up and comedy ensues! There’s lots of room for great falls and great fails, which can be hilarious.”

Season 2 of Girlfriends’ Guide to Divorce will consist of 13 episodes, like Season 1, which is now available on Netflix. And while the character of Delia is quite different than Zadegan herself, art does imitate life in some ways. “I am actually very close to my family, and my character is estranged from her family and has found closeness with friends on the show,” Zadegan says. “That isn’t necessarily my life, but you can find correlations. I just got back from Greece, where my baby sister Shireen got married on the island of Santorini — and it was a big ol’ fat Greek wedding. There were wedding showers for my sister around the time we taped the girlfriends on the show throwing my character her bachelorette party — and my character was buying her dress, while my sister bought hers. It was interesting to watch it go down in real life and act it.”

Zadegan was born in Germany, while her father worked there as an engineer, and she was raised in San Francisco. Her grandparents were from Iran. “Because of the political situation in Iran, most of my family emigrated,” Zadegan says. “It’s a difficult country to visit, but, I’ve been there, and it’s a beautiful country with beautiful people. The politics of these countries are difficult, and it’s complicated and unrepresentative of the people in that country. It’s an interesting place to visit that’s really different, and it’s cool. Many places have been destroyed by politics, but I’m such a believer and I trust so much in the power of the light that I think it’s all meant for some greater good in this world.”

Zadegan started working in theater at age 16 at the world-renowned Edinburgh Festival Fringe in Scotland. “It was a real gift to be so young in such a beautiful place and immersed in something so professional,” she says. “My parents were always really interested in us, and education was important in our house.” Zadegan, who speaks English, German, French and Farsi, landed a performance scholarship, and studied theater and dance, at the University of California. She graduated with honors, earning degrees in literature and writing. “You really can be involved in doing what you love and still get a great education,” she says.

Zadegan has flourished doing exactly what she loves. “I always knew I wanted to do this,” she says of acting. In addition to Girlfriends’ Guide to Divorce, Zadegan has left impressive marks in television — starring in FOX Network’s mega-hit series 24 as First Lady (and then President) Dalia Hassan, as villainess Isabel on NBC’s sci-fi thriller series The Event and as Los Angeles Assistant DA Scarlet Leon on FOX’s legal dramedy Rake.

Other notable television credits include Extant, Masters of Sex, CSI: Miami, Nip/Tuck, NCIS: Major Crimes, The Shield, How I Met Your Mother, Harry’s Law and Lost. Her silver screen credits include the psychological thriller Unthinkable, the comedy You Don’t Mess with the Zohan and the critically acclaimed independent film Elena Undone. And Zadegan spent years in theater, making her Broadway debut in 2011 in Bengal Tiger at the Baghdad Zoo, which was nominated for several Tony Awards and for a Pulitzer Prize. It was actor Robin Williams’ Broadway debut as well.

“The Bengal Tiger at the Baghdad Zoo was so wonderful,” Zadegan says. “I loved every bit of that show! It was a small but incredible cast, and we were the original cast that premiered on Broadway. Robin Williams was a beautiful actor and an even more beautiful man. It was my greatest pleasure to work with him. He was someone who gave a lot of his time, more than people know, to various philanthropic organizations, and he was a true believer in love, and I miss him.”

Later next year Zadegan, an avid dog lover and rescuer, will be a celebrity co-chair for the Louisiana SPCA’s Howling Success Patron Party & Gala, the organization’s premier fundraiser. “We have always had dogs in my family,” Zadegan says. “I am a huge animal lover. In recent years, two rescue dogs came into my life — and it’s almost like they find you. Charlie is an English Bulldog and Midgey is a Norwich Terrier mix; she’s the bad one, but I love her,” Zadegan says, laughing. “I honestly wish I could adopt so many more; there are so many sweet, beautiful animals that need homes.

All you have to do is go to a shelter; you’re going to want all of them. Everyone should have a dog! They are so sweet and they give so much love. Sometimes rescue dogs can have tough little personalities, but it’s rewarding to see results when you work with them a little bit. Midgey was really abused, and I can’t believe how far she has come because I’ve shown her love, and now she trusts me. It’s so easy to make their lives better so why wouldn’t you want to?”

Although Zadegan has not yet visited New Orleans, she does have it on her bucket list. “I’ve never been to your beautiful city.” she says. “But I have this dream that I’ll be there for Jazz Fest next year. I literally started shooting Extant the week I was supposed to go to Jazz Fest this year. And when I get to New Orleans, I plan on eating my way through New Orleans, having some serious gumbo and some Creole cooking, getting some beignets and getting to Jazz Fest. These are the top three things I’m going to do. I love music, I really do. We grew up with music in our house, and music is really everything to me. When I read a script, I listen to music while I’m getting to know the characters. You celebrate music in New Orleans, and the regional music is exceptional, and, when I think of New Orleans, I think of music. It would be amazing to work in New Orleans in film as well — one day I hope!”

1.37K
previous Paul Rosenblum: Decades of Dedication
next In Gear