Adam Biderman, chef and owner of The Company Burger, has a culinary background that reads like a who’s who of Atlanta’s and New Orleans’ most influential chefs of the past decade. 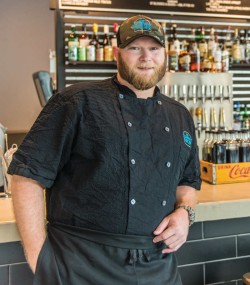 Born and raised in New Orleans, Biderman says he always had an interest in food. His first taste of the restaurant industry was “cutting hams in half with a hacksaw” at Heavenly Ham on Tchoupitoulas at age 15. He also worked at Michael’s Mid-City Grill, a pre-Katrina neighborhood favorite with legendary burgers, where he says his “burger tastes were developed.”

Biderman moved to Athens, Georgia, to attend the University of Georgia, but he quickly realized that he was “never meant to be in school” and, in 2002, moved to Atlanta. While there, he worked as a sous-chef at Restaurant Eugene; he also worked at Star Provisions and at the gastropub Holeman and Finch Public House. In 2008, while home for Christmas, Biderman had what he calls a “fortuitous meeting” with local restaurateur Neal Bodenheimer at his cocktail bar Cure on Freret Street.

“The city was electric that night,” Biderman recalls. “Standing there that evening, I could sense it. It felt good to be back on Freret Street — you could just see the potential.”

About six months later, Biderman decided he wanted to come home. He took a position as a line cook for chef Donald Link at Herbsaint before taking a year off to begin planning and designing his own project. On Aug. 17, 2011, The Company Burger served its first round of eponymous burgers on Freret Street.

The namesake burger is composed of two 6.5-ounce patties, each topped with a slice of American cheese — with thinly sliced red onions sandwiched in between them — then topped with house-made pickles on a freshly baked bun. Biderman created The Company Burger, and he says it is his favorite menu item.

“It’s my deathbed burger,” he says. “It’s the classic American cheeseburger, made with the best quality ingredients. We make as much as we can ourselves in-house. We grind and patty our meat; we make the pickles; make our own mayo and sauces; and bake the bread. Everything is seasoned individually and made to order.”

Biderman sources the restaurant’s beef from Creekstone Farms. “It’s an all natural, hormone- and antibiotic-free, ethically sourced product, and the quality is unmatched, especially in a hamburger,” says Biderman, who chose a blend of chuck and brisket to make a juicy, flavorful burger.

The Uptown location has been so successful that Biderman opened a second location on O’Keefe Avenue in the CBD on Sept. 22. He and his team “absolutely love” being downtown, because it’s an area that offers a mix of tourism and business lunch traffic. The diversity of the clientele at this location inspired Biderman’s team to put greater emphasis on the bar business, which boasts more than a dozen draft beers and a full bar that offers “approachable, easy and delicious cocktails that go great with food,” Biderman says.

According to Biderman, the “gorgeous bar” helps transform the downtown location into a combination sports bar, burger joint and a “great place to get a cocktail” where, during a typical lunch hour, one can find businessmen in suits, people in scrubs, tourists in flip flops and crews in hard hats — all sitting side-by-side at the bar, where diners can receive full service. “I think we’ve made a great everyman’s restaurant,” Biderman says. “We’re all about delivering a certain level of hospitality.”

A true burger joint, The Company Burger menu also offers several milkshakes and malts, including Biderman’s favorite, the Steen’s Vanilla Malt, in which he says, “The malt powder and the Steen’s get together and do some crazy stuff — it’s amazing!” thecompanyburger.com