Classic holiday spices offer more than just good tastesNo other holiday tempts and excites foodies like Thanksgiving. It’s one of the few days in which overindulging is not only expected but is practically demanded. A cornucopia of sweet and savory aromas, from honey-baked ham to pumpkin pie, engulf the air, creating a sensory seduction few can resist. While I too am guilty of Thanksgiving gluttony, I find the intoxicating bouquet of these holiday delights practically as alluring and addictive as the dishes themselves. This symphony of spices—namely cinnamon, clove, nutmeg, allspice, vanilla and ginger—is not only pleasing to the palate, but each boasts distinct healthful attributes as well. So this holiday season, as you contemplate that second serving of candied yams or pecan pie, go ahead and indulge guilt-free. After all, nutritional value supersedes calories every time!

Allspice
Typically available ground and in whole form, this versatile spice (there is a common misconception that allspice is a combination of spices, but that is in fact false) is called Jamaican pepper or pimiento in most parts of the world, as it comes from the fruit of the pimiento tree, found primarily in Jamaica. Berries are harvested mature but unripened, then dried to produce a dark brownish-red spice, which smells and tastes similar to clove and nutmeg. An essential pickling spice, allspice is often used in fruitcakes, pumpkin pie, mincemeat and baked ham, as well as with meats and fish. It is also commonly found in sauces, gravies, jam and teas and is the key ingredient in jerk seasoning. Allspice has been proved to help relax the digestive tract, so it can possibly help settle an upset stomach.

Cloves
Intensely flavored and highly aromatic, cloves are the dried, closed flower buds from an evergreen commonly found in Indonesia. A common ingredient in Asian and German cuisine, clove is the main flavor component in both Worcestershire sauce and ketchup. During the holiday season, cloves can often be found in baked goods and atop baked ham. Cloves contain a powerful anti-inflammatory agent named eugenol, which has been shown to reduce swelling and joint pain. In addition, due to its distinct tangy, spicy bite, it has proved effective as a mild dental anesthetic.

Cinnamon
Derived from the dried inner bark of various evergreen trees, cinnamon is available in rolled quills or in powder form. This pungent spice is commonly used in baking and is essential during the holiday season to flavor pies, candied yams, spice cake and cookies. Cinnamon is quite healthful, as it can help to reduce blood-sugar levels in diabetics and can help to fight bad cholesterol. In addition, it helps to relieve digestive congestion and cramps, and possesses anti-inflammatory compounds that can help to reduce pain in muscles and joints caused by arthritis. In some regions, it is even commonly used as a male aphrodisiac.

Ginger
Essential in Asian cooking, this aromatic, pungent spice packs quite a bite but possesses both hot and sweet qualities. Fresh ginger is the thick, dried root dug up from a perennial herb plant. Ginger in the dried, powder form is spicier, more intensely flavored and possesses a distinct blend of citrus and earthy flavor profiles. Ground ginger is ideally suited for baked goods such as gingerbread, apple and pumpkin pie and ginger cookies, but it also works well with savory foods, including pork and fish. Studies have shown that powdered or grated ginger can help to alleviate headaches and migraines. 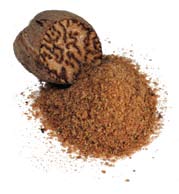 Nutmeg
Originating from the East Indies, nutmeg is the oval-shaped seed from the fruit that grows on the Myristica fragrans tree. This brown, oily seed is available whole or ground (it must be ground before using); nutmeg perfectly blends with cinnamon and ginger, making it an ideal baking spice. It is often found in pies, cakes, pudding, fruit-based dishes and sprinkled atop holiday eggnog. It has been documented that nutmeg can be utilized to fight anxiety and may help combat insomnia.

128
previous Attaining Nirvana
next A Season of Change