Home IN THIS ISSUE Guarded Optimism
IN THIS ISSUE
SPORTS
February 29, 2016 Paul Wegmann 0

The return and rise of Norris Cole is a site to behold. 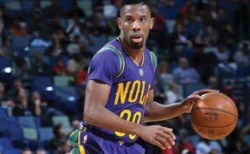 There are no second chances in American lives, but New Orleans sometimes seems to play by different rules than America. There are times and places where the New Orleans Pelicans have created stars who have ascended. There was Chris Paul who blazed through the Big Easy’s sky but could never quite bring his teams even to the brink of greatness before passing out of our horizon and on to Los Angeles.

And there is Anthony Davis who is burning like the Northern Lights, almost a fixture now, awaiting others to join him in his firmament while it still lasts. The Pelicans continue to try to build a core of stars around Davis to ensure that light burns as brightly and as permanently as possible. One such star may be point guard Norris Cole, who has been a spark throughout his presence in New Orleans but appears primed to become a more prominent member of the starting five moving forward.

Having arrived from Miami last year as a mid-season acquisition, Cole stepped in for an injury-riddled, extremely needy Pelicans team. Cole immediately came to the fore, showing skills in a variety of roles that had been largely under wraps with the talent heavy Miami Heat. Albeit, while gaining valuable and rare championship-caliber experience with the likes of the “Big Three” (LeBron James, Dwyane Wade and Chris Bosh), there rarely seemed an opportunity for Cole to make a sizable or noticeable impact. Despite being a first-round draft pick out of Cleveland State University in 2011, Cole had seemingly languished on the Heat’s bench awaiting his turn. It seemed he was about to embark on a typical NBA journeyman existence, being drafted by the Chicago Bulls; he was soon thereafter traded by way of Minnesota to the Heat, and then, last year, he found himself involved in the inevitable three-team, nine-player trade that only the Association seems to specialize in. And yet a closer inspection finds that Cole has been one of the most productive of his draft class despite the limited playing time, producing the sixth most games played and the seventh most assists per game, landing in a group of other young stars from that class including Kyrie Irving and Klay Thompson.

In the 28 games he played for the Pelicans in the 2014-15 season, Cole produced a career high in points per game and three-point shooting percentage. He also proved to be one of the key factors in the team’s late season, improbable run for the playoffs. Finding himself in quick rotation — due to heavy injuries to the team’s backcourt — Cole showed tremendous versatility, discipline and reliability en route to helping drive the team to its best season since the Chris Paul days. Cole proved to be a valuable x-factor— a versatile, smart player — who facilitated the higher play of all those around him.

In the offseason, Cole would train with LeBron James, who obviously thought highly enough of him to choose him as his partner to help him prepare for the season, even as Cole awaited a contract offer as a free agent. The Pelicans resigned him this past September. They likely knew they had found a point guard aptly suited to the pick and roll, a key element in the artfully designed offense of new head coach Alvin Gentry, waiting in the wings behind the primary guard trio of Tyreke Evans, Eric Gordon and Jrue Holiday. Indeed this season, Cole has continued his reputation for playing hard and as a good shooter off the dribble who is also capable of pushing out to Ryan Anderson or driving inside to dish to Davis — both of which are key elements in Gentry’s high paced scheme. All of this has come into focus with the injury suffered by Evans this past February, which has left him out for the year, thrusting Cole into a starting position for the remainder for the season.

Perhaps most telling of what Cole could do if given the full run of the floor, in a late January game with Davis, Gordon and Evans out, he and Anderson played the pick and roll to perfection, as Cole played 38 minutes; scored 17 points; and generated 10 assists, seven rebounds, a steal and a three pointer, while helping Anderson score a career high 36 points in an impressive win versus the Sacramento Kings. Two games before that, Cole helped the Pelicans generate a team record of 17 three-point goals.

This was in the midst of the team’s best stretch of the season in which they won five of six games at home, taking their only loss by one point to playoff contender the Houston Rockets. As the Pelicans move forward to close their season out, with or without a playoff run, they will be trying to identify which players can help them build a nucleus around Davis for the coming years. With his championship experience and excellent fit into what head coach Gentry is trying to do, it is just possible that Cole has found a lasting NBA home in New Orleans.