Sugith Varughese, the Canadian writer, director and actor, stars in the critically acclaimed American drama The Girlfriend Experience on Starz. 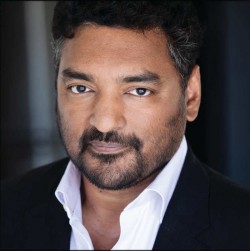 The Girlfriend Experience, a new Starz limited series by executive producer Steven Soderbergh, is undeniably one of the most critically acclaimed American dramas to debut this year. Based on Soderbergh’s 2009 film with the same name, the show follows the double life lead by Chicago law student Christine Reade, played by Riley Keough, who becomes a high-end call girl while interning for a prestigious law firm. The show follows Reade’s path as she tries to balance her two lives of practicing law, and providing emotional and sexual relationships at a very high price. The series is absorbing, sexy, thought-provoking and surprising, and Canadian writer, director and actor Sugith Varughese is thrilled to have scored a big role in the highly anticipated show after auditioning for a very small role.

“The Girlfriend Experience is the best reviewed show I’ve been on,” says Varughese, who plays managing partner Tariq Barr, a head lawyer at the firm where Christine interns, and partner and friend to Christine’s boss David Tellis, played by Paul Sparks. “Soderbergh gave Lodge Kerrigan and Amy Seimetz the creative reigns for the show as filmmakers; they co-wrote every script and each directed different episodes, and the end result is amazing and seamless. And the reviews have been unbelievable. I’m like, ‘Wow! I’m on this thing!’” The series premiered April 10 on Starz and will run into July; also, all 13 episodes were released the same day on Starz On Demand and many fans have binge-watched it. “The first day I got tweets from people who watched the whole thing and loved it,” Varughese says. “People with restraint can wait until July to see the conclusion.”

The penchant for audiences to indulge at once in the entire series of The Girlfriend Experience is understandable given that Christine, aka Chelsea while she’s performing her extracurricular activities, is so mysterious and fascinating; sex, control and empowerment themes are not often written for female characters. And Christine actually enjoys her work. “It makes her so interesting because she makes no apologies for what she’s doing,” Varughese says. “She’s not desperate and doesn’t come from a repressive background, like the stereotypical high-end escort character. It might be kind of shocking, but, if you stick with the show, she becomes quite compelling. People tune in for one thing and get something much deeper, richer and interesting that they expected.”

The engaging in transactional sex versus traditional work to earn the kind of money that enables one to imbibe in $1,000 bottles of Champagne and swim off the backs of yachts remains a provocative theme of the show. “That’s putting the morality we usually bring to that whole job, and flipping it over on its head and saying, ‘Okay, how is this fundamentally different than being a high-powered, high-paid patent lawyer?’’ says Varughese. “You’re providing a service for a fee, and, if you don’t get paid, you’re going to sue. In a way it’s all about business, but the intimacy issue is reflected both in her day life in the law office and in her secret life as an escort. They’re two sides of the same coin, and that’s an interesting statement the show makes. It’s not merely this sexy, titillating show; it’s got something to say. The law firm is even designed with a brutal antiseptic quality to it; they’re making the point that law is kind of soul-hustling, just like maybe being an escort is, yet people manage it.”

As managing partner, Tariq is above David in the pecking order of the law firm and the characters are also friends on the show. “I give David information about what’s going on, and there is lots of skullduggery in the firm with people poaching clients and the like,” Varughese says. “I serve as the early warning siren before stuff hits the fan; I give him the truth just before he gets it slapped in his face. In a way, every character in the show has a sort of dichotomy; even my character has a bit of that double life. There’s always something more to every character than meets the eye. There’s a party scene where Tariq gets a little tipsy. Tariq is a bit of a drinker so here’s a guy who has a lot of power, lots of status; he feels he’s earned every piece of that, but that doesn’t mean he’s completely whole.”

Varughese’s tale of landing the part of Tariq is a cool one; he auditioned for a short role as an East Indian businessman, yet he wound up as an integral character on The Girlfriend Experience. “This is my Hollywood story,”  Varughese says. “I read in an Indian accent for this three-line part as a potential client. They didn’t give me the part, which was annoying because I thought I did a good job! But they wanted me to play this other character originally written as a white American. So I read without an accent and they cast me. I asked the producer how I got the part and he said, ‘When we saw you the lightbulb went off,’ so I think I was in the right place at the right time doing the wrong thing!”

With over 80 film, television, theater and radio drama credits in the United States and Canada — and several impressive Canadian film and television nominations and accolades to his name, including a Writer’s Guild of Canada Award — it’s no stretch to see why the intelligent, multitalented Varughese was cast for such a superb show. Famous for his role as Faisal in the successful Canadian TV series Little Mosque on the Prairie, a sitcom popular in over 85 countries and now in syndication and available on Hulu in the United States as Little Mosque, Varughese has also starred in television shows such as Degrassi: The Next Generation in Canada and on FX’s The Strain, and in films including Orphan, Mission to Mars and Best of Both Worlds, a multicultural romantic comedy that Varughese wrote and wound up starring in after the role for an Indo-Canadian in his 20s could not be cast. “It was going to be cancelled by the public network in Canada so I begged them to let me audition; I literally wrote myself into an acting career,” Varughese says.

Varughese was born in Southwest India’s coastal Kerala state to a Syrian Christian family and immigrated to Canada at the age of 1. “The only place that would accept an Indian doctor, my father, to do his training in brain surgery back then was Saskatoon, Saskatchewan, so that’s where I grew up,” Varughese says. In college, Varughese double majored in drama and pre-med. “When I turned 30, my dad turned to my mom and said, ‘Oh, he just would have been finishing his residency now.’ But I’ve played 31 doctors! I think I’ll get an honorary medical degree from the actor’s union once I play 50 doctors! [Laughs] Interestingly, the last time I was in India, my dad’s cousin told me, ‘You know, when your father was a boy he wanted to be a film star.’”

Varughese launched his writing career at age 21 after selling his first script for a Canadian drama series called The Phoenix Team. And his first big writing gig was for The Muppets guru Jim Henson’s series Fraggle Rock. “I wrote 10 episodes of the original Fraggle Rock series, which became a co-production between Jim Henson, HBO and the Canadian Broadcasting Corporation,” Varughese says. “It was shot in Toronto, and they hired local writers, so I got to write for the greatest storytellers in the world when I started out. I learned from the best. It was one of the greatest experiences of my life. Jim even directed one of my episodes. My boss and mentor was Jerry Juhl, who was the third Muppet; he basically wrote everything that Miss Piggy and Kermit ever said. I would have been happy to work for them forever if they were still alive. I was very young and intimidated as hell by Jim. I’d go through the motions of being a collaborator with him, but I won’t pretend that I felt comfortable! He was a genius! And Jerry Juhl is the unsung hero of The Muppets. The first time we went into the room where the puppets were stored, it literally took my breath away. Jerry saw my reaction, took a puppet off the peg and put his hand up it and said, ‘You know, without us, these are all just socks.’ That made me realize I could do the job.”

Fraggle Rock has stood the test of time, and Varughese feels some episodes rival the best television ever done on the script level. “The Muppets and Fraggle Rock were cutting edge,” Varughese says. “We weren’t trying to write for families or kids, we were trying to entertain ourselves. There was some racy stuff that may have gone over the head of a child but not over the head of the dad. A lot of the kids’ stuff today is so zany and pandering and doesn’t have staying power. We took the storytelling seriously, and the characters were strong and well-conceived by Jim and Jerry, and they really respected the audience.”

Toronto is home base for Varughese, who can’t wait to visit New Orleans. “I would kill to come to New Orleans,” he says. “I’m very happy with things here in Canada — our prime minister is great, but I don’t think we can beat New Orleans cooking. The costume designer for The Girlfriend Experience, Caroline Eselin, is from New Orleans. She gave me a list of all the places I should go, so I’ll go to Preservation Hall to see the Jazz Band, and I want to see Kermit Ruffins and go to Vaughan’s and the Maple Leaf. I want to see a second line on a Sunday; I want to eat at Bacchanal, Gautreau’s, August, Galatoire’s and Compère Lapin. That’s my New Orleans itinerary.”