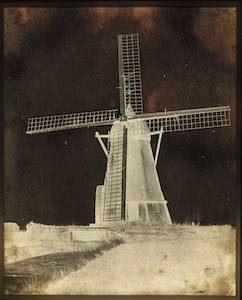 With a set of exhibitions focused on photographic negatives, the New Orleans Museum of Art offers an unusual reverse-view of a familiar art form. The central of the three exhibitions, on view through July 17, spotlights the work of contemporary photographer Vera Lutter, a New York-based artist known for her striking negative prints made with a rudimentary camera.

Vera Lutter: Inverted Worlds features 12 photographs, including large single-panel images, diptychs, and a triptych made between 1998 and 2014 in Europe and the United States. Adding to the intrigue, Lutter creates the negatives using a room-sized pinhole camera, known as a camera obscura, with exposures that can last for months.

Two accompanying exhibitions, Paper Negatives and Negative Image, add historical context to the Lutter display by exploring the role of the negative throughout the history of photography. While Negative Image highlights innovative uses of the negative in avant-garde and 20th-century art, Paper Negatives offers a rare look at some of the earliest negatives in existence. These images, made in the mid-19th century with chemically treated writing paper, show that compelling art can be found not only in a finished piece, but within the artistic process itself.

“The focus has been on the positive images, yet the negatives have been an essential part of the process,” says Russell Lord, Freeman Family Curator of Photographs, Prints and Drawings at NOMA. “They’re also quite beautiful.”

The paper negatives include stunners like a triptych of the Taj Mahal and images made in the Himalayas. “I’m very interested here in alternative histories of photography,” Lord says, adding that as the use of negatives wanes, the NOMA exhibitions remind viewers that, “very simple and basic methods” can still create powerful art. “Sometimes we don’t need all the technology,” Lord says. noma.org

Wait, What? A new show combines comedy with a drinking game.

Watching and listening to recordings of his live stand-up sets, New Orleans comic Geoffrey Gauchet started to notice some onstage patterns: He touches his stomach a lot; he frequently leans on his stool; and he often tosses in a self-mocking, “I’m so adorable.”

“Other comics and I have joked that you could take a drink every time I say, ‘divorce’ or ‘my girlfriend’ and get pretty hammered,” Gauchet says. He’s certainly not the only comic with habitual quirks, but he could be one of few to parlay those tics into a drinking game.

The comedian’s newest creation, a monthly series dubbed Wait, What?, works like this: Audience members receive a list containing both general stand-up comedy tropes, such as asking crowds how they’re doing tonight, plus habits specific to each comic on the show. Every time a comic does or says something on the list, the audience takes a drink. Comics do not know what’s on the list before going on stage.

Gauchet, who also hosts a live comedic game show called The Rip-off Show, said gimmicks like drinking games and oddball contests can make stand-up more accessible to audiences, especially in a city more accustomed to live music than live comedy. “My goal is to engage audiences with something lots of people here love to do — drink — as kind of a gateway to watching more traditional stand-up showcases,” Gauchet says.

Wait, What?, which debuted in April, takes place at the Hi-Ho Lounge, 2239 St. Claude Ave. Admission is free and the club extends happy-hour deals during the show. WEBTKTKTK

Hours before boarding a riverboat to perform at this year’s BUKU Music + Art Project, Ben Davis, the DJ known as Vibe Street, described what makes his sound stand out. It’s a blend of electronic and hip-hop with samples of folk and bluegrass, he explained, a genre he dubs grass-hop, electro-hip-hop-bluegrass, grass-hop-future-folk, folk-music-from-outer-space. Or put simply, “Something between a DJ and a jam band.”

As Davis explains his vibe, it’s obvious that the Denver, Colo.-based performer delights in mixing and remixing the words, blending them in new and unexpected, even outlandish, ways.

This bent toward playful experimentation permeates his sound. At BUKU, Davis proved a physical performer, keeping in constant motion as twangy banjo rhythms suddenly surfaced amid synthesizers and hip-hop beats.

New Orleans seems a great place to experiment musically, Davis says, and he is eager to return for his first full public show in the city, set for July 16 at Republic NOLA.

“There’s just so much culture and diversity here,” Davis says, adding that the city has a reputation for being open to different sounds. “People are down to hear cool, new, interesting music without necessarily [knowing what it is] — not everywhere is like that.”

So far, Vibe Street’s local experience includes a space-cowboy-themed Carnival ball in 2015 and the VIP-only show at BUKU. His fans here were disappointed last fall, when a tour-promo snafu led some people to mistakenly think he would be performing here. As local fans have waited patiently, Davis says he plans to make the show “a grand production.” vibestreetmusic.com, republicnola.com
BUKU Local DJs

Crowds can relive a bit of BUKU year-round by moving to the sounds of New Orleans Djs like DJ Soul Sister and Tristan Dufrene, both of whom played sets at this year’s festival. DJ Soul Sister, a well-established favorite, presents HUSTLE at 11 p.m. Saturdays at the Hi-Ho Lounge. A relative newcomer, Tristan Dufrene plays occasional gigs at the Hi-Ho Lounge, Dragon’s Den and private parties, but the curious can hear her house-techno-electronic sound weekly on Mixcloud during live Sunday programs by Techno Club Nola.

Dufrene started deejaying years ago for events around her native Cut Off, La., “But that was nothing like what I do now, where I am actively pursuing the artistry of it,” she says. About a year ago, Dufrene began beat-matching, collecting obscure samples and honing her craft, mostly self-taught with help from a mentor. An epiphany led her to focus on European-style techno. Lately, she’s also gravitated toward the atmospheric and melodic. “I’m passionate about the sounds I’m putting out,” she says.

**The image of Vera Lutter’s work are provided by the New Orleans Museum of Art.