A Voice for the Deaf 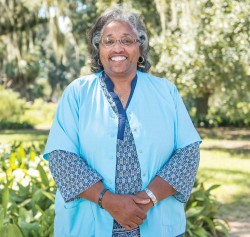 It was supposed to have been an “easy A.”

Arthine Vicks Powers needed a break from the grueling pre-med schedule at Tulane University. She decided to enroll in an elective class at Delgado Community College and chose sign language.

“I wanted a class not related to science so I could relax,” Vicks Powers says. “It was frustrating in the beginning. My mindset was, ‘This is supposed to be relaxing to me — an easy A’ — and it wasn’t.”

Before the semester was finished, she realized she was in love with the language, and, each semester, alongside her Tulane classes, she continued to make her way through the Delgado coursework, immersing herself in the Deaf community, even signing in her sleep some nights.

At first, a medical degree had seemed like a good choice. Her mother and brother were nurses; her father a nursing assistant; her sister had spina bifida. She thought she would become a pediatrician specializing in children with disabilities. But the distant end-date to all that schooling made her wonder if there weren’t other things she could be doing with her time.

And then the United States Marines called. Literally.

Her brother had passed away, but when recruiters kept calling the house for him, her mother said she had a daughter who was interested. Vicks Powers shocked herself by taking the call, and, soon after, signing on the dotted line.

“Military wasn’t the first choice on my radar,” she says. “God’s been working with me … He really has.”
And that wasn’t the last time she heard God calling, she says.

After 12 years stationed in various locations as a communications center chief, Vicks Powers left the military and began sign interpreting full time. She was volunteering with the Deaf choir at St. Gerard Parish for the Hearing Impaired when the pastor called to gauge her interest as pastoral minister. Vicks Powers prayed about it and said yes. That position progressed to director of the Deaf Apostolate for the Catholic Archdiocese of New Orleans.

“That was a long time ago,” she says. “All my hair was the same color then.”

Hurricane Katrina consolidated many of the Deaf Apostolate’s efforts, and, currently, only two churches have sign interpreters for mass: Blessed Francis Xavier Seelos in the Bywater and Our Lady of the Lake in Mandeville. The exciting news, says Vicks Powers, is that in their mission to better serve the Deaf in local Catholic communities, five more churches should have sign interpreters in place by early next year.

Training new interpreters for the positions can be an undertaking. There are so many nuances that come with the language of mass that involve a different kind of listening for an interpreter — especially when it comes to conceptual meanings and beliefs. For example, she says, when you’re interpreting, “Our hope is in the Lord,” you can’t cross your fingers to express wishing. There’s also the confusing concepts of God the Father and Father the priest. “There’s a lot of catechesis in the mentoring of these individuals,” she says.

Another outreach program generating interest is an upcoming conversational sign language class designed to expose all ages to simple signing.

Vicks Powers feels it is her calling to advocate for and be a bridge for Deaf people to the hearing world. “I feel that working with the Deaf and being involved in the Deaf community is vocation,” she says. “So there are times that I have to share and give cultural information to the Deaf and to the hearing so as to encourage communication.”

A Deaf person’s biggest challenge is to be viewed as a person of importance, she says. “That’s a big frustration … that they aren’t on top of the list. Deaf people are just like you and me.” arch-no.org

Deaf Interpretation as a Career
For the past 14 years, Arthine Vicks Powers has been an instructor in Delgado’s American Sign Language Interpreting Program, the only one in the state of Louisiana. The program grants a two-year associates degree in communication and offers a 2+2 reciprocal agreement with many local universities so the course work rolls over toward a four-year degree. Vicks Powers says that there is plenty of demand for interpreters across the country. “The field is not saturated,” she says. “Everywhere Deaf people go, we go.” With the advent of the American Disabilities Act, the Deaf are granted accessibility to an interpreter, from doctor’s appointments to schools, for meetings at work or emergency services. dcc.edu