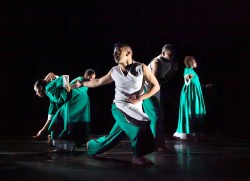 You may have noticed a new sculpture in New Orleans City Park, located on Roosevelt Mall near Tad Gormley Stadium. If not, then be sure to make the discovery the next time you’re in the area. The 11-by-9-by-8-foot welded steel sculpture is named Jendiva and was created by artist Michael Dunbar. The sculpture is a gift to the park from Michael and Susie McLoughlin.

For almost four decades, Dunbar has worked as a professional sculptor, building monumental, abstract works of art in steel and bronze. The artist’s works play with the concepts of time, distance and space through the precise connection of arcs, planes and beams. It has been said that his work often conjures imagery of mechanical objects used to move and measure the earth, explore sky and space, and transport objects across vast distances.

Dunbar’s process begins with model versions, which he refers to as machinist studies, and he then creates courtyard sized versions of the monumental scale pieces. Oftentimes, stationary forms are balanced in a way to imply movement. michaeldunbarsculpture.com
Move to the Beat: Catch an incredible dance production this month, showing for only three days and featuring local cast members.

The New Orleans Ballet Association has partnered with The NOCCA Institute for a Main Stage production that features one of the nation’s top names in dance Ronald K. Brown and his dance company EVIDENCE. Brown, who advocates for the growth of the African American dance community, integrates traditional African dance with contemporary choreography and spoken word. EVIDENCE will perform for three days only at NOCCA’s Freda Lupin Memorial Hall (Jan. 27 and 28 at 8 p.m., and Jan. 29 at 2 p.m.).

A multigenerational, New Orleans-based cast of up to 30 will join the dance company for the uplifting finale, On Earth Together, which will be set to the music of Stevie Wonder. EVIDENCE also includes two dancers with Louisiana roots: rehearsal director, dancer and New Roads, La.-native Clarice Young; and New Orleans-native Courtney Paige Ross, who is an alumna of the NORDC/NOBA Center for Dance and NOCCA. Tickets are $50. nobadance.com

Retail Therapy: A local exhibition showcases a century of shopping in New Orleans.

Now that the holidays are behind us, it’s a good time to discover the history of shopping in the Crescent City. The Historic New Orleans Collection invites visitors to explore 100 years of the city’s cosmopolitan retail scene through a new exhibition titled Goods of Every Description: Shopping in New Orleans, 1825–1925.

The free exhibition, which is on view through April 9, includes a replica shop window, period showcases and more than 150 artifacts, including merchandise from showrooms that lined Royal, Chartres and Canal streets in the 19th and early 20th centuries. Items on display include ceramics, silver, furniture and clothing. An interactive map and historical records show the shops’ locations, their dates of operation and descriptions of their wares. hnoc.org

132
previous Once Again, A Civic Circle
next Houma or Bust