From concept and design to an eclectic, international menu, Emeril Lagasse’s fourth New Orleans restaurant reflects the new face of the celebrity chef and the ever-changing Warehouse District neighborhood. 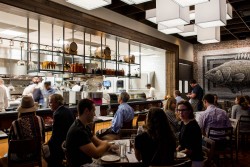 Several months ago, celebrity chef Emeril Lagasse opened Meril in the burgeoning Warehouse District, mere blocks from his flagship restaurant Emeril’s. Named after his daughter, Meril is a departure from Lagasse’s usual style, offering a casual dining environment with a highly diverse and affordable menu. To head the kitchen at Meril, Lagasse tapped Will Avelar who worked as sous chef at Emeril’s Delmonico. Together they have crafted internationally inspired dishes from Korean short ribs to Spanish-style croquettes and boudin tamales, but the global aspects don’t end at the edge of your plate.

Lagasse selected local architectural firm Bockman Forbes Design/Suite 222 Architecture, LLC to create the global atmosphere that diners enjoy at Meril. “We tried to reference world architecture and design elements from Mesoamerica, Asia, Europe … we tried to make it part of the whole concept, and I think that’s why it does seem so unique,” says Brian Bockman, founder and principal of Bockman Forbes Design. “It’s individual and it’s unique to Emeril’s … it’s part of his new look and it exists only for him.”

Virtually everything was custom made from the Japanese-inspired light cubes and egg-crate drop ceiling to the pre-cast concrete bar countertops with chamfered edges and concealed lighting. Bockman Forbes also designed the aluminum cage chandeliers inspired by crab and lobster traps. “We built 3D models of those chandeliers and sent them to a fabricator,” says Julie Ford, principal of Suite 222 Architecture. “I’m sure the last thing a major chef like Emeril would want is to go into another restaurant and see the exact same light fixtures.”

Integral to every successful restaurant is the kitchen design. Tripp Moynan, a local food service facility design consultant, was brought in to help create the dining bar, a signature feature at other Emeril’s restaurants, and to lay out the various equipment from a wood-burning pizza oven to a Japanese robata grill. “It’s a kitchen outfitted to make pretty much anything, which is something that isn’t normally done in most restaurants,” Ford says. The design team worked diligently to blend the atmosphere of the open kitchen with the dining room, an exacting task from lighting and tile work to the suspended shelving over the food bar that displays house made pickled vegetables, preserves, and barrels of aging hot sauce and Worcestershire sauce.

One of the more challenging aspects of the design was retaining industrial elements, like exposed brick walls, and ducts and pipes, while managing the restaurant’s acoustics. The usual suspects in durable restaurant flooring — like tile or concrete — are highly reflective, so the team at Bockman Forbes discovered a Mexican mesquite wood flooring solution by Kaswell. “They produce these wood block floors … so those are actually these little, individual pieces that they lay by hand, and, because the wood’s cut on the ingrain, it’s extremely strong and durable,” Ford says. “They used to use them in factories and to make streets 200 years ago. It’s way more durable than a traditional wood floor and it also absorbs sound.” They also employed fabric room dividers and sound absorbing acoustical panels in the pyramidal ceiling to help keep noise levels down.

Even the artwork at Meril has an international air about it. The symbolic, Chinese-inspired murals of ducks, crab and fish were created by local artist Landon Lott. “[Lott] does artwork for movie companies, so he was leaving to go to New Zealand for six months, and the only time he could do it was before we even started working on the space,” says Chris Wilson, culinary director at Emeril’s Homebase. “Those murals were the first thing that got done.” The restaurant also proudly displays a piece at the dining room entrance created by abstract naturalist painter Alex Beard who lives and works in New Orleans. Dubbed “Pig,” it’s indicative of the Chinese symbol for virility, strength and fertility.

Finally, Meril’s design was also, in a small part, a family affair. Even the younger Lagasses had some input. Coalescing with its international flair, Meril includes a modern, Millennial draw with everything from state-of-the-art LED lighting and sound systems to flat-screen televisions and illuminated phone charging stations. “[Lagasse’s] son EJ had some ideas about technology and what the Millennial age-group was looking for in restaurants,” Bockman says. “That’s how we came up with all these phone charging stations.” Even Meril, the restaurant’s namesake, had a small hand in creating this new concept. “On the doors to the restrooms are these little drawings that [Meril] did when she was younger,” Wilson says. “They really are cute.”