Ballad of a Boutique

The Troubadour Hotel offers surprises at every turn. 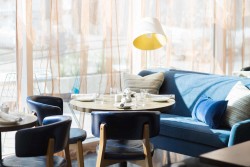 This past fall, New Orleans’ Central Business District welcomed the newest addition to the city’s burgeoning boutique craze, The Troubadour Hotel. Slumber Corners NOLA, LLC purchased the long-defunct Rault Center and initiated a $10 million renovation, in coordination with locally based Campo Architects, that only came to completion a few months ago. The result is a 17-story, 184-room, landmark boutique hotel managed by San Francisco-based company Joie de Vivre. The company, which operates 25 boutique hotels, touts the creation of “original hospitality experiences that are grounded in local culture.”

Considering the pervasive, vivid culture of New Orleans, this was not a difficult stipulation to meet. “As a significant center of music, food and converging ethnic influences, New Orleans makes the Joie de Vivre quest to cultivate authentically local and eclectic experiences for our guests an easy mission to fulfill,” says Melissa Haft, senior director of design for Joie de Vivre/Two Roads Hospitality. As denoted by its nomenclature, The Troubadour Hotel’s style and design is mostly rooted in music — a vital element ever-present in the Crescent City.

Since the original building was constructed in the 1960s, San Francisco-based design firm Paletteur chose to have The Troubadour Hotel reflect that era, though through a completely modernistic approach. Funk, soul, R&B and rock ’n’ roll were emerging musical genres during the 60s — influences that led to the deconstructed guitar fret board art installation that greets visitors when they walk through the front doors. From the furnishings to the architectural materials, all of the public areas evoke an ambiance that one might expect to find in a musician’s lounge. “[Examples include] the iconic psychedelic art panel at the front desk by J. T. Kirkland, which was found at the local Guthrie Contemporary Art Gallery, to works by Christy Lee Rogers, whose whimsical, circus-inspired photography revels in the same ‘let your freak flag fly’ attitude of New Orleans,” Haft says.

In addition to the musical influences, the hotel also incorporates 60s-era design elements with local cultural accents pointing to French, Spanish, African, Haitian and Cajun ethnicities. Like the city itself, The Troubadour Hotel’s design is an eclectic mixture that combines a colorful past with an abstract, yet rather pleasing future. The guest rooms feature African mud cloth throws upon the beds, custom-designed table lamps inspired by African masks and artwork depicting voodoo-inspired dancing skeletons. Denim headboards with contrast stitching adorn guest beds layered with tie-dye-like pillows, while bar tables and stools serve in lieu of the traditional desk.

The Troubadour is also home to two new dining and drinking establishments created by dynamic local chef Phillip Lopez, co-owner of two of the city’s most creative dining destinations: Root and Square Root. On the ground floor of The Troubadour, Lopez offers Petit Lion, a neighborhood restaurant whose menu resonates with the flavors of a modern French bistro. The restaurant features a horseshoe-shaped bar, encouraging guests to engage with one another, retro high-backed booths and mid-century-style sofas for post-repast lounging.

A sharp departure from the rest of the hotel, Lopez’s other venture — dubbed Monkey Board — jumps straight into the current flavors of modern day. Offering craft cocktails from T. Cole Newton (the spirited genius behind Twelve Mile Limit) and “food truck” fare, this rooftop bar features a 360-degree view of downtown New Orleans and the Mississippi River. “For Monkey Board, the design evokes a Southern backyard feel that captures the grittier side of the Central Business District and other lesser-touristic areas of New Orleans,” Haft says. “You ascend up a late 60s elevator cab, and, once you arrive on the 17th floor of this modernist building, you emerge into a casual, colorful Southern terrace.”

Recently added to the National Register of Historic Places, the renovation for The Troubadour Hotel uncovered interesting design aspects of the original Rault Center that Joie de Vivre integrated into the new building. “We uncovered the original terrazzo floors of the building during demolition, which were preserved and restored in the main lobby,” Haft says. “We also discovered some graffiti on a wall [of the rooftop bar] that read ‘To the moon.’ We loved the phrase so much that we had local graffiti artist Gabriel Flores tag a wall with it in an over-scaled installation.”

Exuding both eclectic charm and 60s-era elegance, The Troubadour Hotel is a welcome addition to downtown New Orleans that embraces local artistry, cuisine and music in unique and surprising ways. “Our brand is about taking the guest on a journey of discovery and surprise, which often entails rethinking traditional elements of a hotel,” Haft says. “With Joie de Vivre, the guest has really come to expect the unexpected.”

250
previous Downtown Living: February 2017
next In Davis We Trust