Stories in Silver and Stone 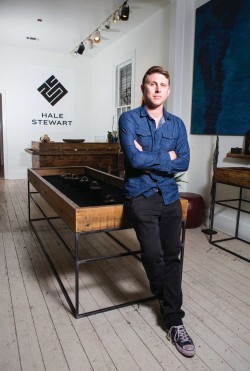 As a teenager, Travis Hale Stewart hitchhiked to Burning Man — the annual community and art experiment in Black Rock Desert, Nevada — without water and only $200 in his pocket. There he saw three 20-foot sculptured faces set to opera music. One was made of copper and cried fire; one was wood that cried sand; and the last, grass, cried water.

“It was just a breathtakingly beautiful experience to see it, set against the mountains at dusk, surrounded by the lights and madness of it all, but somehow silent,” he says. “That experience taught me more than a little about faith.”

From that moment, he says he knew no matter what he had done in the past or what might happen in the future, that everything would be fine. And so he decided on the spot that he would do what he wanted with his life and it would be totally fine if he failed.

That wasn’t just Burning Man talking. Today, Stewart has opened his own jewelry boutique — Hale Stewart — on Magazine Street and is hard at work on the culmination of his 15 years of experience; his first fall collection is due out Oct. 1. He has been in New Orleans 10 years, at first helping to rebuild after Katrina. In 2008, he started working for Thomas Mann learning old-school American metal-smithing and, afterwards, working with Mignon Faget, who taught him everything he knows about manufacturing, branding and marketing; fine jewelry technique; and traditional European silver work.

His “no fear” mantra factored heavily in to his decision to go solo: “I was born ready and I have a good imagination, so I took the opportunity, which I couldn’t pass up,” he says.

He’s painted, welded and played in bands for years. Music is still a huge part of his life, but nothing, he says, has been as personally and directly gratifying as making jewelry.

Stewart loves the tedium of his work. He actually finds it fulfilling to toil for hours on something and make mistakes that force him to start over. To finally reach the end result after that frustrating, arduous process is even more rewarding. “The feeling I get when I’ve completed something I’m proud of, that I’m proud to show people … that’s my motivation,” he says. “That feeling is what I’m passionate about. I guess I learned it’s not the outcome. It’s the fight. And I like a good fight.”
How New York City influenced his life: “My Uncle Jack was an artist in New York for 55 years,” Stewart says. “I worked at his studio in the East Village when I was a teenager; most of what I know about art and art history I learned from him. I loved New York City back then. It was another strange and magical place. I remember at times feeling like I was at the center of the universe, at the heart of everything, so that memory has influenced me and certainly has influenced where I’d like to take the business.”

And then there’s Taos, New Mexico: “I ended up in Taos after years of what I guess you’d call ‘drifting out west,’” he says. “After living in such a beautiful, strange, interesting and haunting environment, I don’t think one could not could not be influenced by it. The vastness of the horizon, the Milky Way at night, the storms a hundred miles away sweeping the distance, the culture of cowboys, hippies, drop outs, Native Americans, the healers, the crystal-ball-peddling con artist. I never really understood the term ‘God’s country’ until I lived in Taos, but there is something about where the horizon meets the sky. It stays with you.”

Western wear meets NOLA quirk: “Setting large cabochons (polished gems) on large cuffs has somewhat recently become popular locally, so in that respect I guess I lucked out,” he says. “My stone pieces have sold surprisingly well, but my metal work is contemporary compared to traditional Southwestern jewelry. I think that maybe taking turquoise and lapis, but making it more wearable everyday is appealing to New Orleanians. To me, the stones are the magic; the metal is the art.”

Staying viable in challenging economic times: “Jewelry has existed since the dawn of time, in all periods and all cultures,” he says. “I don’t think it’s going anywhere. I’m very fortunate that my trade and craft has a market. That was by chance however, so that’s a hard question for me answer.”

The happy wanderer, here to stay: “New Orleans has been my home for 10 years now,” he says. “I can’t imagine living anywhere else. The magic, strangeness and culture here isn’t going anywhere.”