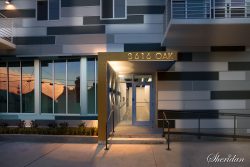 Since the street was renovated in 2009 as part of a government-funded revitalization project, Oak Street’s businesses and residents have been growing by leaps and bounds. The motley collection of buildings on this historic neighborhood corridor range from a 1930s-era bank (currently the Rue de la Course coffee shop) to a brand new convenience store. Most recently, a mixed-use building located on Oak Street between Monroe and Leonides streets has completely broken from the surrounding architecture, offering new residents more modern accommodations.

Local developer George Fowler purchased the plots from professional landscaping company Amann & Associates. “I just noticed that the first half of Oak Street was very walkable, the first four or five blocks, and then people would kinda stop,” Fowler says. “Oak Street is only seven blocks, and I thought it would be nice to have the whole thing walkable.” The four story, 21-unit development was the first large-scale project for the new developer who reluctantly admits to being an attorney “in a former life.”

To create the residential building, Fowler hired architect Charles Neyrey of M2 Studio. Neyrey dubs himself a “third-generation builder” in New Orleans. His grandfather, Joe Neyrey, graduated from the Tulane School of Architecture in the 1940s and worked for Higgins Industries (noted creators of the Higgins boat, an amphibious landing craft used extensively in the Allied forces’ D-Day invasion of Normandy). Following in his father’s (and grandfather’s) footsteps, Charles Neyrey earned his degree in architecture from LSU and went on to work for firms in New York and New Orleans.

Neyrey explained that historically, the property at 8616 Oak Street was originally three parcels of land. Since most of the building along the street are of a much smaller scale, they broke the facade of the building into three parts. “That way we thought the scale of what we were doing fit a bit better into the community,” Neyrey says. They also felt that the design and colors would offer a nice juxtaposition between the modern and traditional aesthetic.

Billed as “luxury living,” the 21 residential units or condos all feature exquisite layouts and amenities. Each unit features Versailles Oak engineered hardwood with a wire-brush finish and a 50-year warranty, its own private balcony with river or Oak Street views, white quartz countertops in the bathrooms and Danze Parma faucets in the kitchen. All of the condos also come with completely furnished kitchens replete with stainless steel and Energy Star appliances. Prices range from $395,000 to $645,000, but they’re going fast and most of the units have already sold.

For all of the residents, both current and potential, every unit comes with its own parking space, storage unit and access to the gym, Oak Street Fitness. Located on the bottom floor, the gym will also be available to the public hopefully by the end of this summer. Probably the most obvious amenity would have to be access to historic Oak Street and all that the corridor has to offer. With more than a dozen restaurants, several bars, a pharmacy, a tailor, a hair salon, a framing store … the list of convenient options are too many to count. Plus, residents are less than two blocks from the Maple Leaf Bar, easily one of the most famous music venues in the city.

It seems that Fowler’s hope to make the entire corridor a place for both tourists and locals to enjoy has materialized with his first big project. “I’ve done a few single family homes Uptown, but 8616 Oak Street is my biggest project to date — and I am very pleased,” Fowler says. We believe the residents of the Carrollton neighborhood agree. 8616oak.com