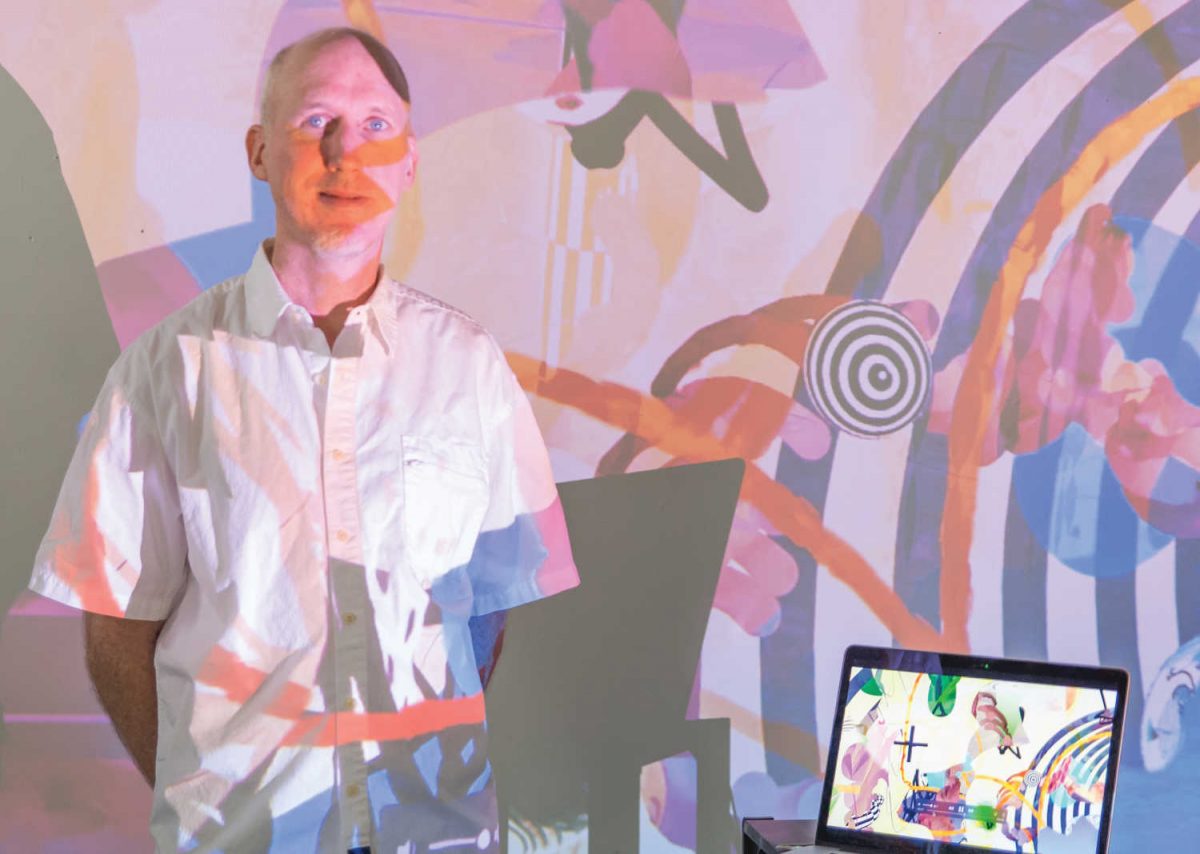 You may think that you know everything about art, but how much do you know about non-traditional forms of art? You can find many galleries in New Orleans filled with paintings, sculptures and drawings, but you’d be hard-pressed to walk into a building to find art projected onto the walls. Media artist David Sullivan began his career as a painter, but he finds that using light and technology to create his “environments” is far more engaging and provocative.

Sullivan was born in Rio de Janeiro to American parents, and they moved back to the states to Louisiana when he was just a child. He took art very seriously all his life and became highly educated about it. “I am a painter by training,” he says. “I have a B.F.A. from LSU, and a Masters from the Maryland Institute College of Arts in Baltimore. Back then, computers weren’t much to look at when I was doing all that. After I graduated, I came back here and started doing music, mixing multitrack audio, and I started messing with the graphics. I just continued to do that since then and have been doing computer graphics since the early ’90s.”

Technological advances since the ’80s has changed David’s work tremendously, and it’s allowed him to be able to show people his art in a variety of venues. “We show work in galleries, houses and museums,” he says. “Some of it can be tangible; you can print things and can print on paper, metal, and various other substances. Nowadays, you can print sculptural elements; those can be displayed like traditional art pieces. But my wife Courtney Egan and I can project in any space. The projectors are getting brighter and smaller, and it’s getting easier to do that. When we started, the projection work would have to be isolated or removed to a dark side alley, but nowadays it can be in a gallery.”

Because Sullivan began in traditional types of art, he’s better able to understand his chosen medium. “I do miss some of that visceral quality of paint, however I think that there’s a lot that’s gained in terms of the mutability and the interactivity,” he says. “When I was doing grad work, I would fill the gallery with floor-to-ceiling paintings and sculptural objects, and it was an environment that you walked into and experienced, which was great. But it didn’t change or move. Working with computers and projection allows you to have the visuals react and change over time and in reaction to the viewer, which is something I’m very interested in and something that makes it stand apart from traditional mediums.”

Sullivan had his work “New Harmony” showing in the projection art festival Digital Graffiti earlier this year, and it was truly otherworldly. “The piece that I showed was a very cartoon-inspired animation,” he says. “For this one, I was thinking about utopias — these human attempts to build something that is perfect but in reality is always less than perfect. In that piece, I show three-dimensional objects that are being seen in a two-dimensional way; they’re being translated and they have these bright colors and goofy animations that are inspired by Warner Bros. animations. So at the same time, everything is chaotic and falling apart.”

Sullivan creates the art, but he wants to let you create your own thoughts about it. “I think of artwork like thinking objects, they’re things that people can use to figure out things for themselves,” he says. “Follow your own thoughts. When you release a work out into the wild, you do it to let it have a conversation of its own with whatever viewers encounter it.” swampmonster.org