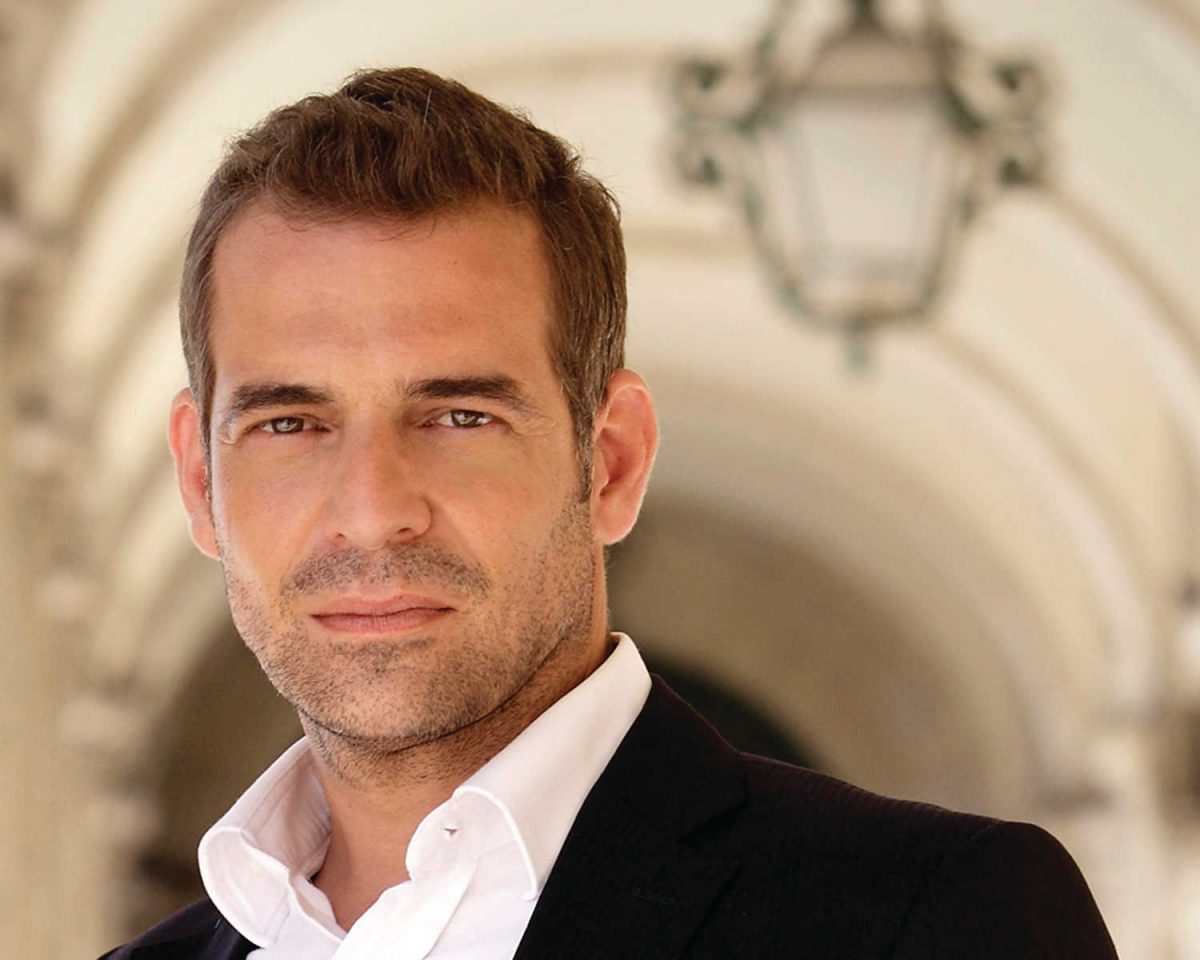 Hollywood has produced some highly memorable fictional drug lords, such as the legendary character “Antonio ‘Tony’ Montana” played by Al Pacino in the classic mob film Scarface, and Brian Cranston’s iconic role as “Walter White” in AMC’s blockbuster neo-Western crime drama series Breaking Bad. Recently, dashing and talented Portuguese actor Pêpê Rapazote left an enduring mark on American audiences in Netflix’s popular crime thriller drama Narcos with his portrayal of “José ‘Chepe’ Santacruz Londoño,” a notorious non-fictional drug leader of Colombia’s Cali Cartel, which was deemed the most powerful crime syndicate in history by the U.S. Drug Enforcement Administration and that commanded more than 90 percent of the world’s cocaine market at its peak.

Narcos goes deep inside the vast inner-workings of the cocaine industry and stars Pedro Pascal as DEA Agent ‘Javier Peña’ who is hard at work in Season 3 trying to tackle the New York City branch of the Cali Cartel, led by Chepe. Season 3 premiered Sept. 1 with all 10 episodes available for streaming and follows the rise of four drug kingpins of the Cali Cartel who came to prominence in the wake of the demise of Pablo Escobar, the infamous head of Colombia’s ruthless Medellín Cartel. Rapazote’s charismatic Chepe character has fans of the show clamoring to see more of the calm, cool and ultra-violent-when-necessary narco trafficker.

“I tried to do Chepe with a lot of heart, and I fell in love with this character,” Rapazote says. The real-life drug lord had left Colombia for New York City to run the Cali’s satellite drug empire, which operated as a large, slick cocaine corporation right under the noses of oblivious Manhattanites. “They opened over 20 cocaine labs about 25 years ago in New York that Chepe was very hands-on with, and New Yorkers could not believe this was happening,” Rapazote adds. “Chepe studied seven semesters of chemical engineering and he probably had a ‘life’ PhD in cocaine. He was there all along with the farmers for the seeding of the plant in Peru to the final cut of the cocaine in New York, and he mastered the production of cocaine. There was an ether ban in Colombia, and ether is used to cut the cocaine in production, so Chepe was the one to say, ‘I’ll move to New York to produce my cocaine and I’ll even save some money on transportation.’ I don’t think it was a consciousness about the danger related to doing this business in New York, it was just, you know, we can do it! I can do it! He was really positive and he wasn’t full of himself, and I love the nerve and confidence of this guy.”

Data compiled by Parrot Analytics Demand Expressions system revealed that Netflix’s Narcos was the highest-ranking digital original title out of any of the subscription video on demand services for the week after the launch of Season 3, giving Rapazote plenty of exposure and drawing multiple admirers to his work. “It was wonderful to hear that the fans were drawn to Chepe, because I really enjoyed playing him,” Rapazote says. “He was very down to earth and he could be your next door neighbor. He dressed like a handy man so they called him ‘the overall guy’ because he always wanted to work. He had an amazing sense of humor, that’s what they say. He was very calm and he was the only one who could call the other Cali drug leaders names and get away with it since he grew up with the Orejuela brothers. He called Miguel Orejuela ‘Limón,’ or ‘Lemon,’ because he was so ‘acid!’ Miguel hated it, but, since it was Chepe, he got away with it, and I love that!”

According to Rapazote, Chepe pulled a lot of pranks in Bogotá, Cali and in New York. “He was undercover so no one really knew what he did,” Rapazote says. “He had a lot of fun trying to mess with people’s minds. In Cali people tell me, ‘Pepe, you’re doing Chepe right — it’s perfect,’ because they say that sometimes when someone would fix their eyes on Chepe, he would walk up to that person and play around: ‘Were you looking at me?’ ‘No, no, not me!’ ‘Are you sure about that?’ He knew he was dangerous but he had a lot of fun. He was not like Pablo Escobar, who was a rock star and loud and wanted everyone to know who he was and he threatened people. The Cali Cartel had legitimate businesses like banks, insurance companies and drugstores that they would lure you with, so it was not like being with a regular narco anymore. It was like being with very powerful, rich businessmen. It was a pretty incredible web and much easier for anyone to fall into the seduction of the Cali Cartel than it was with Escobar.”

The reputation Rapazote has for stealing scenes is on full display in Narcos, including in an explosive confrontation in a barbershop that takes place between Chepe and some adversaries. “If I’m not wearing a pink gown you don’t have to worry,” says Rapazote in reference to the smock he wore when violence erupted during his hair treatment on the show. “And that’s the thing with drug lords — it’s never just a shot to the head — it’s not fun anymore to get a shot between the eyes. That’s so last year! No, they’ve got to do something different, something more over-the-top, and they really did that with this show.”

The fact that Chepe was a real human being and one of the most colorful drug lords in cartel history before his murder in 1996 is something Rapazote thinks about a lot. “It’s crazy,” Rapazote says. “After you read a few books about the Cali Cartel and you watch Narcos, you see that the screenwriters had to tone down the show, because all the very bad stuff is so unbelievable that people would say, ‘Ah, that’s too much, they totally missed it, they ruined the show, they didn’t have to do that.’ For instance, Chepe had three wives, and it seems that he had an argument with his second wife then he killed her, and then he brought his kids from the second wife to his first wife and said, ‘Okay, now raise them up as your own!’ People might be like, ‘Okay that story is too much,’ I don’t know.”

Season 3 of Narcos earned a 95 percent Audience Score on Rotten Tomatoes, and hearing through various social media sites and otherwise that audiences want to see more of Chepe has been intriguing for Rapazote. “I really love that, and I would love to have a spinoff series of Chepe in New York because the character is so interesting, and with another series we could show all the other sides of him,” Rapazote says. “I have the feeling I haven’t said goodbye to Chepe yet!” Indeed, the possibility of a spinoff featuring Chepe seems natural with such a multi-dimensional character that garnered a following in only one season of Narcos.

Rapazote admits that sometimes people root for the bad guys on shows like Narcos. “I don’t try to turn Narcos into a glamorous thing, because you’ll end up either in jail or being killed in this lifestyle,” Rapazote says. “But the idea of the Latin Mafia where you don’t betray your associates or your people is very romantic, right? You have that family connection and those old-school values, like ‘I’ll die for my family.’ But you get a lot of mixed feelings about people who sell drugs and kill a lot of people to defend their territory and yet they go to church every Sunday, right? Sometimes I make jokes about it, like if you give $5 million to your church, maybe some of your sins will be forgiven! It all depends! It’s weird, but you can be God-fearful and yet kill from Monday through Friday and be the best of Christians on Saturday and Sunday. That’s very Latin, and I’m Catholic, and in Portugal and Spain, there aren’t many other things besides Catholics. And when I was a boy, as Saturday was approaching, I would try to behave a lot better. Sunday, I was the best of angels! And the worst of devils on Monday, you know!”

Intelligent, funny, charming, good-looking and passionate about life, Rapazote was born in Lisbon and is a full-blown star in his homeland of Portugal. In fact, the dapper actor is known as “The Portuguese George Clooney.” “Oh, I don’t know how that name came about,” Rapazote says. “People say it’s the charisma and something like that, but it’s a little too, I don’t know. I just don’t want to run for president and I think George Clooney will!”

Rapazote is fun-loving and has possessed a curious nature since childhood. He has pursued multiple fields of art throughout his life; he considered studying engineering and physics but chose to become an architect to satisfy a desire to practice several disciplines.

A lover of the stage, Rapazote performed in a rock band, singing and writing his own music and took theater classes before becoming a professional actor in 2000. He speaks Portuguese, Italian, French, Spanish and English and has a knack for perfecting foreign accents, as evidenced by Chepe’s convincing Colombian intonation he delivers in Narcos. He’s earned many accolades including a nomination for a Golden Globe in Portugal for his role as “Fernando” in the television series Jura and a Golden Nymph award for Outstanding Actor in a Drama Series at the Monte-Carlo TV Festival for his role as “Miguel” in Pai à Força. He has landed other notable roles such as in Showtime’s Shameless as Jimmy/Steve’s father-in-law “Nando,” an over-protective dad and Brazilian drug lord. Rapazote is currently filming the MGM thriller Operation Finale and will play “Carlos Fuldner.”

Visiting New Orleans is a dream Rapazote wants to realize one day. “I’ve never been to New Orleans, but it’s one of those magical places like New York,” Rapazote says. “If you like music, folklore and traditions, you’ve got to be in love with New Orleans, even though you’ve never been there. I would love to be in New Orleans for Mardi Gras or really for anything else, because I’d really love to get to know New Orleans. I know I would love the old world architecture since I’m an architect; it would be amazing for me because I really love historical towns. New Orleans sounds beautiful and romantic, so I would absolutely love to go there!” peperapazote.com

1.69K
previous Megan Holt
next Soul of a Superstar