Dancing with the Stars champion Peta Murgatroyd performs in New Orleans at the Saenger Theatre next month. 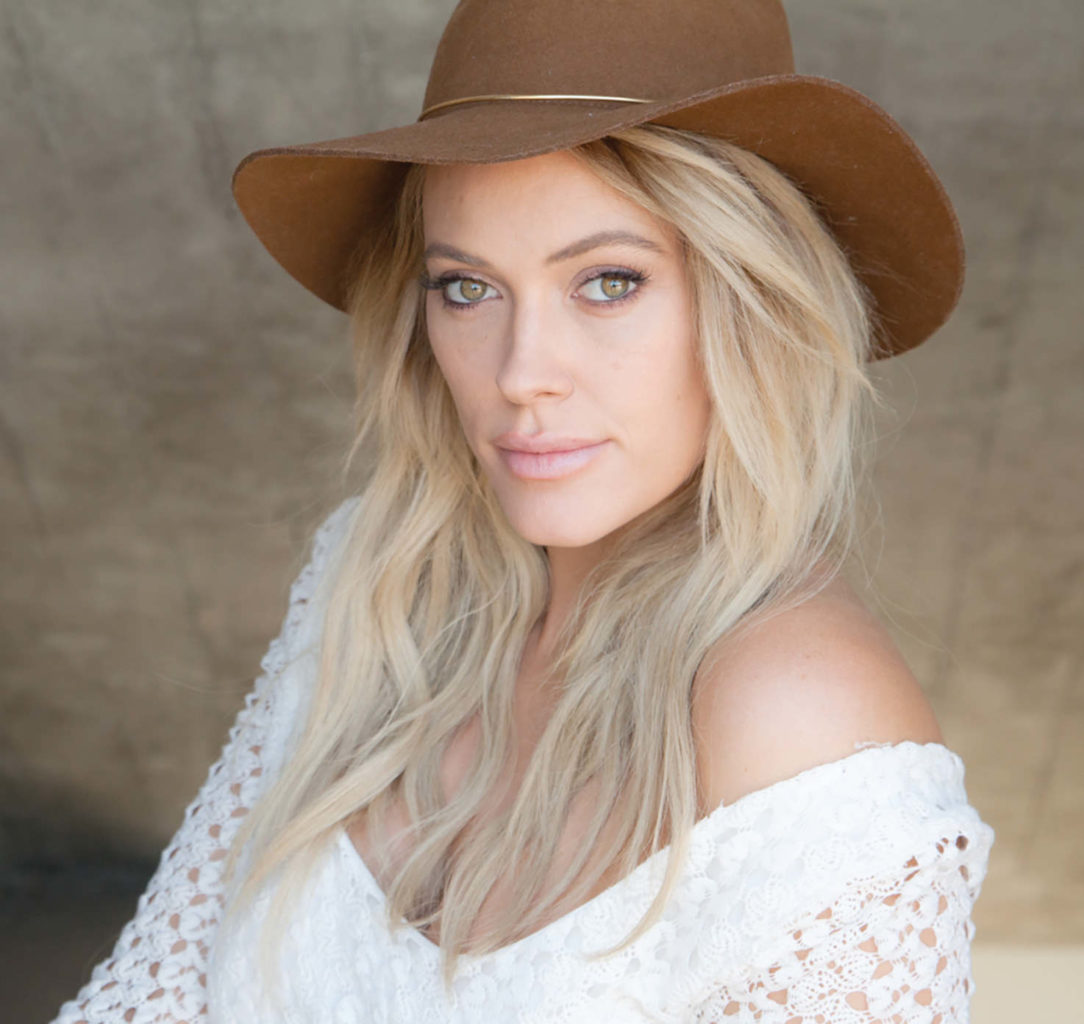 Peta Murgatroyd danced her way into the hearts of Americans on ABC’s beloved dance competition television series, Dancing with the Stars, becoming a regular member of the professional cast during season 13 and a bonafide fan-favorite. Her fascinating performances dazzled audiences, viewers and the show’s judges, and earned her two coveted Mirrorball Trophies dancing with her celebrity partners, NFL legend Donald Driver in season 14, and actor and model Nyle DiMarco in season 22. In recent times, Murgatroyd has been celebrating some other amazing milestones both personally and professionally: She launched her tanning line Peta Jane Perfection on QVC in 2016; she gave birth to son Shai Aleksander in January 2017; and she married the love of her life, fellow Dancing with the Star champion and two-time Mirrorball Trophy winner Maksim Chmerkovskiy, in a fairytale wedding last summer. Yet another dream came true for Murgatroyd: She nabbed the lead role in her first film, Faith, Hope and Love, which will be released in November.

“I have to pinch myself because it was a goal of mine to start embarking on my acting career, and it actually happened,” Murgatroyd says. “I got the lead role in Faith, Hope and Love, so my life kind of changed. All of a sudden I wasn’t a dancer anymore; it was the start of something new and exciting for me. I had to use part of my brain to learn lines and make it real, and it wasn’t about my body anymore. I really enjoyed it!”

In the heartwarming romantic comedy, Murgatroyd stars as Faith who’s in danger of losing her dance studio, and she meets Jimmy Hope, played by Robert Krantz. “Audiences will fall in love with the characters,” Murgatroyd says. “Faith and Jimmy are both divorced and very vulnerable characters who help each other through dance. It’s a family movie for all ages; it’s enlightening, inspiring and, ultimately, in the end, finding love through dance is such a beautiful thing.”

Life imitates art for Murgatroyd; finding love though dance is exactly what happened between the striking beauty and her hunky husband Chmerkovskiy. “Maks and I met on Broadway when we did Burn the Floor,” Murgatroyd says. “We became a romantic couple a couple of years later. It’s great to have something so strong in common with your spouse. We understand what each other does for a living, although we do other things now besides dancing. It’s nice because if I dated somebody, say, in the business world, they may not understand me dancing a romantic rumba onstage with another man. It’s great to be able to dance with my spouse and feel those things with him.”

New Orleans will have the chance to witness Murgatroyd, Chmerkovskiy and his brother Valentin Chmerkovskiy, another Dancing with the Star pro who also has won two Mirrorball Trophies, in a spectacle of dance when Maks, Val & Peta Live On Tour: Confidential hits the Saenger Theatre April 25. “It’s going to be exciting,” Murgatroyd says. “I was in New Orleans last time when Maks and Val were on their tour. I was super pregnant on the road with them, and I just fell in love with New Orleans! It was my first time there, and I absolutely love the culture. And I fell in love with the people, the food and the live music at night — it was all just amazing. It was super hot and we had this torrential rain, which I’ve never seen before in my entire life. It was crazy!”

Murgatroyd promises that Confidential will be even bigger and better than the Chmerkovskiy brother’s first tour, Our Way. “I think having three lead characters now makes it bolder than the last show, and having a woman be a part of it may be more appealing for the men coming to watch the show,” Murgatroyd says. “We’ll be revealing a little bit more about ourselves. Confidential provides a deep connection, so we can tell a few more secrets about our lives through family bonds, love stories and things like that. I think people will enjoy it because it delves a little deeper into our lives. Fans always want to see the nitty gritty and what your day-to-day life is like; obviously we can’t show everything about our family lives, but we give a pretty good indication in this show.”

Not many women are in such a unique position of sharing a stage with both their husband and their brother-in-law. “I know there will be times where we’ll need a break, and I’ll have to sit on the bus by myself,” Murgatroyd says. “It’s family; we love each other through thick and thin regardless of anything and our strong love will emanate throughout the show. There are no fictional stories in this show. It’s literally based on our lives and the circumstances we’ve been through — horrible ones, beautiful ones. I’m not acting out a love story with my husband; it’s the real deal and we’ll perform it through an Argentine tango or a rumba or something. We might talk about the hard times too so it’s going to be enlightening.”

Born in Auckland, New Zealand, and raised in Perth, Western Australia, Murgatroyd began training in classical ballet at age four. For 12 years she studied under Madame Lubov Nikonorenko, a renowned former principal dancer of the Kirov Ballet. At age 16, Murgatroyd had an ankle injury, and, after enduring ankle reconstruction, she was still determined to dance.

“I felt I had no other choice than to dance,” Murgatroyd says. “I had no other thoughts in my head about what else I wanted to be. I was 16 years old, sitting at home and thought, ‘Well, my foot doesn’t work on pointe, so let’s figure out something else.’ I said to my mom, “Enroll me into the nearest salsa class,” and she did. I put on some heels and I thrived in Latin dancing. I loved it! I loved the fact that you could dance with a man, and get close to him, and you could feel these different things through the rumba, the samba and the cha-cha. It all worked out and I haven’t looked back.”

With contemporary and Spanish dance added to her repertoire, Murgatroyd quickly became an Australian Dance Champion after beginning ballroom dancing then moved to London to further her career. She toured the world as a cast member in Burn the Floor in 2004 for six years; the live dance show wound up landing on Broadway, with Murgatroyd starring as the lead female dancer. “Getting the Broadway gig was the pinnacle of theater, and it was a dream come true,” she says. “We had sold out shows and that’s where I met Maks. We all couldn’t believe it when our posters went up around the theater on 42nd Street. It was insane!”

In 2010, Murgatroyd moved to Los Angeles and became a member of the dance troupe in season 12 of Dancing with the Stars, and then she become a regular pro on the hit dance reality show in season 13. “DWTS is a huge part of my life,” Murgatroyd says. “I’m so proud to be part of an incredible show that’s going into its 26th season. Not many shows can say that. It’s a family show and that’s why it does so well. Dancing appeals to all ages. It may be the end, but I really do hope to be back.”

Dancing obviously helps Murgatroyd maintain her gorgeous figure. “I also have a trainer I light weights with, and I love boxing,” she says. “My arms have never looked more toned than with boxing, and it’s a great way to get out the fire in you.”

More helpful tips on exercise and beyond are on Murgatroyd’s blog, All Things Fam & Glam, which she dedicates to finding the balance in life. “It’s about family, inspiration and wellness, and I wanted women to know it’s okay to get all glammed up and go out with friends for a drink, plus find quick makeup tips,” says Murgatroyd, who is relatable, charismatic, intelligent and real.

“People know it’s me talking; there’s not a lot of B.S. on my blog,” Murgatroyd says. “There’s stuff out there covering up what motherhood is really about — it’s not about waking up and putting on makeup — it’s getting dirty, feeding, bathing and dressing your child without him crying and getting through the morning alive! People relate because all mothers deal with it and with insecurities and body issues. After I posted a photo of me looking five months pregnant after I gave birth, it went viral. It hit home for many women about not having a flat stomach, and I’m a super athlete dancer. Sharing those parts of you that relate to women is important. I’ve struggled, but I feel I’ve found the balance along with some help. If we didn’t have our nanny, none of this would be possible. Sometimes I’ve thought, ‘I can’t go to work,;I must be with Shai,’ but it’s good for women to get back to work because it’s a space where it’s all about you. Then you can come home, breathe out and be with your child. And you get more comfortable with scheduling. Planning a big wedding when Shai was six months was tough, but it’s been the most incredible year of my life so far!”

Peta Jane Perfection, Murgatroyd’s tanning line created with top skin care line South Seas, sold out in 10 minutes on QVC and consists of Peta Jane Perfection Dry Bronzing Oil and Peta Jane Perfection Tanning Mist, now available on All Things Fam & Glam. “The products have organic DHA in them and they work, giving you a flawless glow,” Murgatroyd says. “The scent is nice and hopefully we’ll expand soon. I was brought up on the beach; my mom would slather so much sunscreen on me I’d be white! There’s plenty of skin cancer today, so I wanted to make something safe for women to feel good about.”

Murgatroyd is an animal lover and will be a celebrity co-chair for the Louisiana SPCA’s 2018 Howling Success Patron Party & Gala held later this year. “This year, I’d love to visit some animal shelters and just play with the cats and dogs waiting for homes,” she says. “Rescuing animals and adopting pets from shelters is so important. Shelters are the first place people should go to instead of buying their pets from stores or farms.” allthingsfamandglam.com, @PetaMurgatroyd and maksandvaltour.com