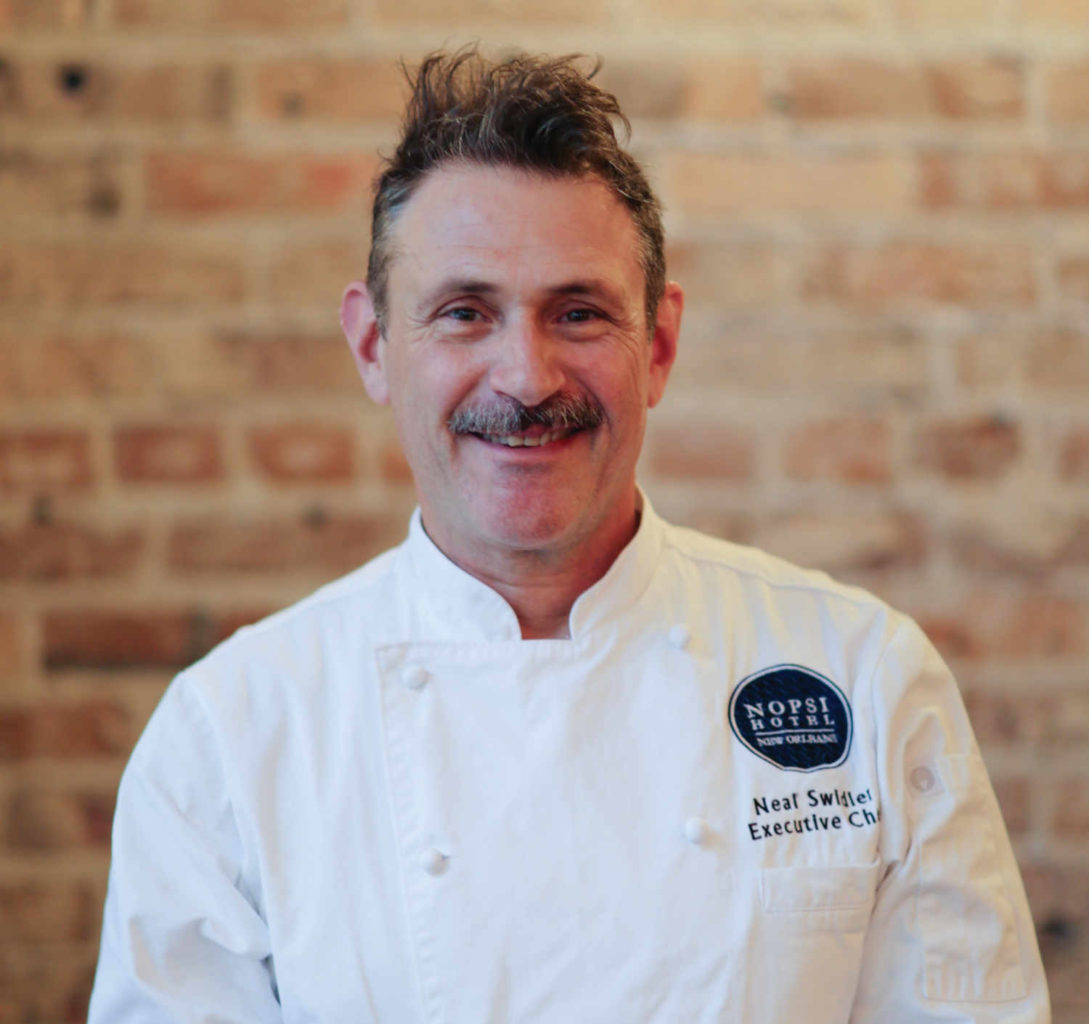 Neal Swidler recently joined the NOPSI Hotel as the new Executive Chef. In this role, Swidler is responsible for overseeing the hotel’s entire culinary operation, including all food and beverage outlets, in-room dining, catering and banquet offerings. Swidler, who used to wear a chef’s coat in high school for fun, loves how people in New Orleans dresses up in costumes. He also loves the fact that New Orleans is one of the main food meccas in the United States — along with New York and San Francisco, he says. Swidler started cooking when he was 15 years old, and he credits his mother and grandmothers with instilling in him a love of food. And after he graduated on the dean’s list from the Culinary Institute of America in 1993, he knew he wanted to come to New Orleans.

“I took advantage of all the opportunities that surrounded me while at school, eventually graduating at the top of my class and earning a six-month teaching fellowship [under the direction of the acclaimed James Beard award-winner Janos Wilder],” Swidler says. “I felt like I had an advantage in school, because I went in having already worked in kitchens and holding cooking jobs. It made me appreciate the opportunity even that much more.”

A longtime New Orleans chef, Swidler draws from an impressive career spanning more than 20 years of executive-level experience at some of the most acclaimed kitchens in the city, including 10 years with Emeril Lagasse’s New Orleans restaurants, serving as chef de cuisine at both NOLA and Emeril’s Delmonico, as well as corporate chef and concept development at NHS Restaurant Consulting. He also was Executive Chef and owner of the award-winning pan-Asian restaurant, Lucky Rooster. His impressive resume of culinary achievements also includes being the winner of the Food Network’s Cut Throat Kitchen Season 6; being featured in the cookbooks Prime Time Emeril and From Emeril’s Kitchens; and Lucky Rooster being named as having the Top 25 Best Chicken Wings in the Country by Gourmet’s Epicurious Magazine. He joins NOPSI Hotel from his most recent appointment at Broussard’s Restaurant.

At NOPSI, Swidler has expanded the number of seasonal items and ingredients on every menu, and he has made significant modifications to the Public Service menu, the hotel’s signature restaurant. Some of the menu highlights include shrimp toast with creole tomato glaze and spicy boiled potato salad; Rockefeller bisque with cornmeal crusted oysters and applewood smoked bacon; and heritage beef tenderloin filet with Brabant potatoes, bacon jam Brussels and cambozola.

Swidler’s overall approach to cooking is to develop thematic cuisine with consideration to the location, the clientele and the meal. “At NOPSI, my approach is to create cuisine that is casual, elegant and fun,” he says. “How I plate food is simple. I want people to be wowed by the food’s dynamic; I want to exceed their expectations. My approach for all of the hotel’s three food and beverage outlets is to make delicious, smart menus that cooks can achieve. It’s an absolute necessity.”

Under Swidler’s direction, NOPSI Hotel will continue to elevate its onsite food and beverage programming with regularly scheduled events, including a weekly lineup of live music, entertainment and happy hour specials throughout all three of the hotel’s food and beverage outlets. There are also monthly wine and spirit dinners at Public Service and the newly launched Henry’s Gin Bar. For example, Monday is Industry Night at Public Service, with music by DJ Marcus Lott, and food and drink specials. Meanwhile, Tempo Tuesday features music by Shawan & The Wonton; Wholenote Wednesday features music by Amanda Ducorbier; Above the Grid Thursday Night, and Funk ’N’ Boogie at Above the Grid on Friday and Saturday, features music by DJ Otto & Friends; and Jazz Brunch on Sundays features music by Sidewalk Swing Band. 311 Baronne St., (844) 439-1463, publicservicenola.com

Neal Swidler shares one of his favorite recipes.