A primer on rare, beautiful gems

Colorful, sparkling, even mesmerizing, gemstones have been adored and sought after for centuries.

In the past, gemstones were known to represent wealth and power, as they adorned virtually everything from crowns to weapons. Today, gemstones are no longer reserved for the wealthy; they are accessible to all those who find them attractive and alluring. 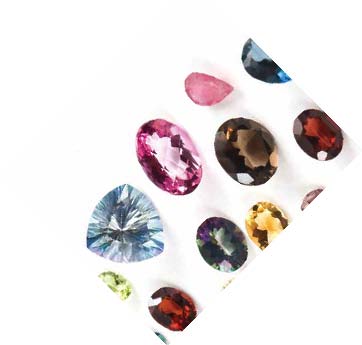 More than 30 types of gemstone varieties—essentially a rock or mineral that has been polished, cut or faceted—have been identified, not including those rare, singular gemstones that show up on occasion and defy category. But there is more to gemstones than merely being shimmering objects of desire. They are regarded as lucky when worn specific to an individual’s birth month and some believe them to possess special powers.

To be considered a gemstone, the stone must be rare, beautiful and durable. Gemstones, in their natural crystalline form, can only be found in certain parts of the world, and it’s their scarcity that makes them valuable in the marketplace. They must also be durable, which means that they should be hard enough to withstand scratches and damage. ??The most valuable characteristic of gemstones is the color, which explains why vibrant examples such as emeralds, rubies and sapphires are highly prized.

Amethyst
A type of quartz that comes in shades of purple, amethyst is a highly accessible stone that is used in all types of jewelry. There are 14 different locations where amethysts are abundantly found today.?? The stone is thought to bring tranquillity and stability to the wearer and to possess great healing powers.

Aquamarine
Aquamarine got its name because it resembles the color of seawater and is considered sacred to Neptune, the Roman god of the sea. Colors vary from light blue to deep blue-green. Though abundant in Brazil, aquamarine can be quite expensive. The stones are said to contain oceanic energy, which is why sailors wore them to give them bravery and power when facing storms on the oceans.

Diamond
The root of the word “diamond” comes from the ancient Greek term “adamas,” meaning “unconquerable” and 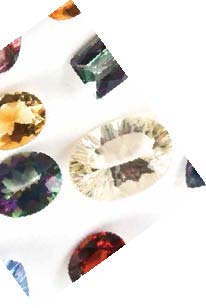 “indestructible.” Indestructible is certainly true as there is nothing on earth that is harder than diamonds, and it actually takes another diamond to cut and polish the brilliant stones. The diamond is the symbol of strength, courage and invincibility and has become the sign of everlasting love.

Emerald
One of the most popular and expensive gems, the emerald is the stone of love and life. It is believed to improve the wearer’s memory, sharpen her wit, enhance intelligence and bestow eloquence. It is the symbol of the Greek goddess Venus, meaning it brings good fortune and gives the ability to foresee the future. Emeralds are available in many shades of green; the deepest ones are the most costly and can surpass the price of diamonds.

Garnet
Garnet jewelry has been found as far back as the Bronze Age. While red is the color most often encountered, the garnet also exists in various shades of green, yellow, a fiery orange and some fine earth-colored nuances. Garnet is believed to have medicinal value, to protect one from poisons and to cure those with blood disease or infections. As a birthstone, the garnet is a protective and guiding gem.

Opal
Opal comes from the Roman word meaning “to see a change in color.” One of the most opulent gems, this stone is a combination of fiery colors. Originating from Australia, this stone has great history and lore.?? Eastern peoples believe it fell from the heavens and is sacred. It is a treasured gemstone thought to bring its owners powers of foresight and prophecy. It is also a token of purity and hope.

Ruby
One of the more precious stones, ruby is considered the king of gemstones and has been extensively used in the crowns and jewelry of kings, queens and emperors. This vibrant red stone has long been associated with love, passion and power. It is believed to give the wearer wisdom, happiness and health and to bring good luck to gamblers and lovers. Rubies are more rare than diamonds, emeralds or sapphires.

Sapphire
When we think of sapphire, we mostly think of the deep blue stone, but in fact, it can come in many colors. Second only to diamonds on the hardness scale, sapphires can be more expensive than diamonds, especially the most prized specimens.?? The ancient Persians believed the earth rested on a giant sapphire and its reflection is what colored the sky.

Topaz
Though typically a golden brown, topaz can also be found in blue, green, pink and red hues. The stone is said to enhance one’s spiritual potential, to increase intelligence and creativity and to impart wisdom and wealth. It is a strong healing and rejuvenating mineral, giving new vitality and good health and protection against many diseases. It is said to dispel enchantments and helps improve eyesight.

Turquoise
Mined since the times of the ancient Egyptians, Mayans and Aztecs, turquoise has been worn as jewelry but also used in mosaics for decoration or religious purposes. Believed to promote prosperity, topaz was not worn by mere mortals in ancient Mexico but rather reserved for the gods. The deep blue color was thought to have powerful metaphysical properties, giving warriors better aim, giving protection against demons and the evil eye.