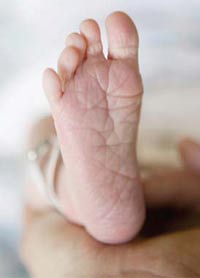 Although there are fewer hospitals available with maternity services since the storm, there are still enough remaining that couples won’t have to worry too much about proximity, or finding a facility that accepts their health insurance. Those are serious concerns, but couples should consider whether their OB/GYN practices at the hospital and if the hospital has the ability to handle difficult deliveries. They should also determine which services and parenting classes are available, look at staffing, and take in the overall impression of the hospital. Is this a place where your child would be welcomed into the world, or would he or she simply be the next vital statistic?

For every hospital with maternity services, the stats for births went up, sometimes dramatically. This was particularly the case at Ochsner Medical Center, which saw a 91 percent increase from 2005 to 2006, going from 926 births in 2005 to 1,768 in
2006. Dr. Alfred Robichaux, chairman of the obstetrics/gynecology department, says the hospital has had to make some adjustments in order to accommodate the patient increase and the demand for labor/delivery rooms (LDRs).

“We’re utilizing other rooms, which were good to labor in,” Robichaux says. “As people delivered in the LDRs, we would move them out and move the others in, or go to a traditional delivery room, which also serves as an operating room.”

Robichaux also borrowed 30 beds from the cardiology unit to facilitate postpartum women. Eventually, labor and delivery services and antepartum patients, women that need to be hospitalized during pregnancy, will be moved to the medical center’s eighth floor. Ochsner also recently welcomed to the department the lactation team that formerly worked at Memorial Baptist.

Ochsner keeps midwives on staff for women who are interested in this method and who have normal, lowrisk pregnancies. For more difficult pregnancies, the medical center maintains a top-notch staff of specialists including cardiologists, pediatric surgeons, and a 24-hour in-house obstetrician. Robichaux says that the 24-hour obstetrician means that in the case of an emergency, the mother and hospital never have to wait for an obstetrician to drive to the hospital because they’re already there. “[Ochsner] has the technology and capacity to take care of anyone, from the lowest risk to the highest risk.”

Preparing for riskier deliveries was one of the reasons Tulane-Lakeside Hospital joined forces with Tulane University in 2005. Tulane’s medical school provides many of the specialists in the hospital’s fetal medicine department. Kathy King, vice president of nursing services at the hospital, says the hospital is fully equipped for all types of pregnancies, and because of an increase overall in the number births at the hospital—pre-Katrina the average was about 140 to 150 babies per month and now it’s up to an average of 220—they have added five new beds to the neonatal intensive care unit (NICU) for those children needing more specialized attention.

“We are seeing significantly more patients than in the past,” King adds, “and we’ve added staff to help assist with that all the way around.

While West Jefferson Medical Center hasn’t experienced the rise in births that Ochsner or Tulane-Lakeside has, it’s been enough to prompt them to hire and train more nurses for the maternity ward. Besides more nurses and more rooms, the hospital has also been taking steps to “baby” mom. For women in labor or afterwards, the hospital offers massage, aromatherapy and hydrotherapy.

Speaking of water, West Jefferson can accommodate water births for couples who are interested in this delivery method. According to Doris Sinotte, clinical director for delivery services at West Jefferson, water has a calming effect and giving birth in water is becoming more and more accepted by the public. Sinotte stresses that the labor and delivery process doesn’t have to entirely take place in the water—it’s completely up to the patient.

Educating their patients and the patients’ families is an important aspect to West Jefferson’s approach. Pam Helmstetter, perinatal educator, outreach coordinator and lactation counselor at the center, says that they present 17 classes a month, which range from the standard parenting classes and grandparent classes to classes for siblings and babysitting training.

West Jefferson has witnessed a dramatic ascent (115 percent increase since the storm) in the need for perinatal specialists for complicated pregnancies. Sinotte says this is understandable with Charity Hospital’s closure, which previously handled many of the city’s high-risk pregnancies. Sinotte says her staff is up to the task, though, because West Jefferson does have a Level III NICU, the highest designation, as well as a 24-hour obstetrician and other neonatal specialists.

Although it’s important to know what a hospital’s capabilities are and what kind of emergencies they’re suited to handle, most pregnancies are low risk. That doesn’t mean, however, that parents shouldn’t expect close attention and personal care. Helmstetter believes a good way to find out if you will receive personalized care in a maternity ward is to visit the ward and see how they handle their patients. Trust your intuition, Helmstetter suggests.

“It shouldn’t be made to feel like a rigid, cold clinical experience—it’s a family experience.”

Beth Norris, director of women and child services at East Jefferson Hospital, couldn’t agree more that a maternity ward and a hospital’s maternity services in general should be welcoming and inviting. Norris thinks this should also extend beyond the baby’s delivery. Moms learn a lot in those first few months after the baby’s birth and not just about sleep deprivation. East Jefferson hosts a quarterly New Mom Tea where moms can get together to enjoy some refreshments, socialize and swap baby tips.

Norris says the teas are a continuation of a couple’s parenting classes, which Norris stresses are vital for anyone considering having a child.

“With education, there are no surprises and you know what to expect.”

Most prospective parents are going to receive more advice than they’ll know what to do with. Everybody— parents, friends, co-workers and neighbors—thinks they know where you should go to have your baby. Norris feels that the most important opinion, besides your own, is the obstetrician’s. And that opinion might easily settle the question of where to have your baby.

“If you’ve chosen a good, conscientious doctor that you trust,” Norris says, “then you’re going to trust the facility they’re guiding you to.”

That doesn’t mean couples shouldn’t be asking questions about the hospital that their OB/GYN practices at. In fact, according to Gene Rossignol, a clinical nurse specialist in Touro Infirmary’s maternal-child services, it also makes sense to find out if your pediatrician practices at the hospital you’re considering.

“Just as Touro has expanded its list of OB/GYN physicians, the number of pediatricians who care for newborns at Touro has also expanded, giving families the option of a one-stop pregnancy and newborn care all in one location,” Rossignol says. In addition to increasing the number of practicing physicians, Touro has added new beds to its well-baby nursery and another 14 beds to its postpartum unit.

If your pediatrician practices at the hospital, then that’s another endorsement for the hospital. Of course, getting in the habit of asking questions is something all future parents should do. Just as you’ve done your research for selecting a hospital and an OB/GYN, you should be constructing a list of questions—hours, services, references and qualifications—for any pediatricians you’re considering.

Many of the area’s hospitals have well-staffed, specialized and accommodating maternity services, and this is no small feat in a region that is still in the midst of a health care crisis. While the immediate post-Katrina baby boom has passed, maternity wards are still busy with newborns and happy parents. And those are the kinds of sounds our area could hear more of—something that tells us this is still a place full of life and worth being born into.

976
previous Save a life
next Better Births