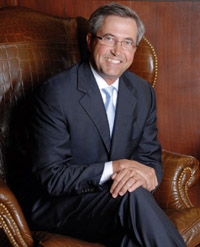 Gery Barry had been at his position as the president and CEO of Blue Cross and Blue Shield Louisiana and living in the state only 10 months when Hurricane Katrina hit. Since then, he’s been at the helm of a movement to reinvent health care in New Orleans and throughout Louisiana. “Let’s not simply rebuild the system that many thought was already broken,” he recently told New Orleans Living magazine. “Let’s create a best practice model for the whole country.” And one way he’s working to do that is through his involvement with the Coalition of Leaders for Louisiana Healthcare (COLLAH), an unprecedented union of major health-care organizations from New Orleans and around the state that has been busy drafting plans for reform grounded in the concept of “medical homes.”

“I love to solve problems, especially those that make a difference in people’s lives,” said Barry, a self-described “math guy” who has an advanced degrees in mathematics and actuarial science. Originally from a small town in Indiana, Barry earned a scholarship to nearby Notre Dame, something that greatly impressed his parents, particularly his father who wanted to go to college but never had the chance. Using his mathematical aptitude, Barry rose through the ranks of the world of insurance and employee benefits, living for over 20 years in Connecticut and then in Canada, where he served as the head of the former Ontario BlueCross. He first visited New Orleans in the 1970s during an actuarial convention and fell in love with the city. When he was tapped for his current position, his fascination with Louisiana was an important factor in deciding to take the job.

What do you see as the state of health care in New Orleans and Louisiana?

To look at the whole health-care system in the U.S., let alone in Louisiana, we tend to have a higher cost and lower quality of care for everyone, both insured and uninsured. One of the reasons is that there’s an over reliance on specialists instead of primary-care physicians. There’s also too much dependence on emergency room care. Worst of all, too many people in our state are dying prematurely because we’re not managing their diseases well.

How has Katrina exacerbated these problems?

There were problems beforehand of course. Access to the right care has long been a particular problem for the uninsured. It’s my understanding that pre-Katrina, 57% of uninsured hospital admissions in New Orleans were handled by the Charity system at LSU facilities. So even with Big Charity, the system wasn’t adequate for the uninsured, even for inpatient care. And now that that hospital is closed and there’s only a temporary facility at University Hospital, the availability of care for the uninsured has become much worse.

What is the purpose of COLLAH?

We simply want to improve health care in Louisiana. One guiding principle is that everyone should have insured access to care which is affordable to them. Another is that everyone should have a choice of where to receive that care. Beyond that, the care they receive should be appropriate, timely and convenient, emphasizing prevention and comprehensive clinic-based care.

Much of the focus seems to be on the uninsured. What about people who already have health insurance?

The initial focus is on the uninsured, but if our proposal is implemented, we expect it can serve as a model for improving the cost and quality of care for everyone. This will help moderate the cost of care and simultaneously lead us all to better health outcomes.

What is the medical home model at the center of COLLAH’s proposal?

It’s a concept that emerged about 20 years ago and is now receiving attention throughout the country. The medical home model is based on neighborhood clinics instead of hospitals. Medical homes will provide healthcare support for day-to-day health issues and for managing chronic health problems. In addition to the typical office visit, a medical home might offer group meetings for diabetics, for example, and communicate with their patients regularly by phone and email, all with the simple goal of helping patients manage their health concerns. Importantly, the homes will also provide continuity with individual physicians, and physicians will be compensated in such a way that they will be encouraged to spend more time with patients. I’ve heard figures that primary care doctors presently need to squeeze in five patients an hour—12 minutes per patient—in order to make ends meet. We believe that doctors need the time to learn about the context of their patients’ problems in order to serve them better.

We are also promoting the establishment of standards of care that the medical home will offer. When a clinic is officially designated as a medical home, a “quality stamp of approval” if you will, one can expect that it will provide better cost and value to patients, such that all insurers, public and private, will be interested in promoting that clinic for their members.

Sounds great. Is all this really going to happen?

Many new primary-care clinics have already been set up and others which existed pre- Katrina have expanded, so it’s already happening. Still, with Big Charity being down, a lot is still up in the air. Not only do we need to make sure people have access to the right care, we need to make sure that those remaining providers in the area get the financial support they deserve and need for treating our uninsured population. That’s not happening today, despite the fact that the state continues to budget about $1 billion per year to provide care for the uninsured, funded mostly by the federal government. COLLAH’s work demonstrates that the portion of this money that’s devoted to the New Orleans area is sufficient to provide insurance coverage for those under 200% of the federal poverty level and leave enough funds to continue to offer a substantial level of safety net care.

How did COLLAH come together?

We went through several stages. COLLAH was formed to complete the work of the Louisiana Health Care Redesign Collaborative headed by Fred Cerise of LSU, which I unofficially cochaired. In COLLAH’s view, the Collaborative’s work was never completed and instead fell prey to a state/federal political impasse. Many of us who were involved in this important process felt that we needed to build upon the good work of the Collaborative to demonstrate that a much better system for the uninsured was indeed financially and operationally feasible. At the same time, we wanted to demonstrate that such an approach could be structured in a way that it would be supportive of a revitalized academic medical center in New Orleans. So everybody would win.

So how did you become involved in the first place?

I personally became involved just after Katrina, heading up the Health Care Redesign Workgroup under the auspices of the Louisiana Recovery Authority (LRA). Dr. Karen DeSalvo of Tulane University and Dr. Roxanne Townsend of DHH were working with me from the very beginning. At a pivotal point, I was picking up the phone and calling people to come to the table—Dr. Pat Quinlan, the CEO of Ochsner; John Matessino of the Louisiana Hospital Association; Dr. Floyd Buras of the Louisiana State Medical Society; Dan Juneau of the Louisiana Association of Business and Industry, and so on. Several who joined were already involved, as I was, with the LRA’s Public Health and Healthcare Task Force, such as Dr. Kevin Stephens of the New Orleans Health Department, Les Hirsch of Touro Infirmary, and the heads of the LSU and Tulane medical programs. Shortly thereafter, and coincidentally, there was a meeting at Tulane University arranged by Secretary Michael Leavitt, who is the head of the U.S. Department of Health and Human Services. His interest and involvement provided more fuel.

When you were calling people, were they skeptical about it?

The reaction of many was that they had been involved in discussions of reforming the system well before Katrina but nothing had ever changed. But this time they were willing to give it a shot because Katrina’s toll made the issue urgent. It’s even more intense now because of two-plus years of post-Katrina frustration. There’s a lot of determination to change things, so that all of the people in New Orleans can get the health care they need from providers of their own choosing. It’s the right thing to do.

COLLAH-It’s the Real Thing
The Coalition of Leaders for Louisiana Healthcare (COLLAH) has brought together hospitals, insurance providers and medical associations into a single organization that reads like a Who’s Who of prominent players in Louisiana’s health-care field. The goal is to reform the state’s health-care system into one that provides affordable coverage for all. Prominent entities in the government and nonprofit worlds who can’t be formal members due to their status are also very much involved in the cause.