After 2010 zoning changes forced the closure of bars in the Metairie triangle known as Fat City, many hoped for a revival of a different kind, and it seems that is starting to happen. Although several other restaurants are currently under construction, Fat City Franks beat everyone to the punch and opened its doors first. 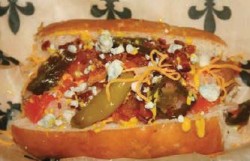 Owned by Allen and Dina Bryant, Fat City Franks is kicking off the area’s resurrection with over a dozen locally made sausages, including alligator and boudin. Top off your frank with “fixins” like roasted pepper hummus, Cajun Monica Sauce and Bouton’s Famous Chili. Open daily from 11 a.m.-10 p.m. fatcityfranksnola.com

Benji Lee of The Saint bar on St. Mary Street plans to launch a high-end coffee shop on Sophie Wright Place sometime this month, dubbed HiVolt Coffee. The new java spot will be in the abandoned angular storefront across the street from the Half Moon Bar & Grill, and will specialize in “third wave” coffee. What’s “third wave,” you ask? It’s a movement to produce high-quality product that involves betterment at all stages, from improved methods of growing and harvesting to “micro-roasting,” or roasting in small batches on site at individual coffee shops. HiVolt will also offer a small food menu with very simple seasonal dishes like house-made yogurt and an open-faced tomato sandwich.

The celebrated pop-up Noodle & Pie finally opened its long-awaited permanent digs in the old Reginelli’s building on the corner of Magazine and State Streets. Eman Loubier, Brian Armour and Kris Bouley, the chefs and minds behind Noodle & Pie, had such great success with the pop-up that opening a brick-and-mortar location just made sense. The new eatery offers an ever-changing menu of ramens, sweet pies and Asian-inspired snacks and small plates, all at very affordable prices. Open from 4-10 p.m. on weekdays and until midnight on Friday and Saturday.

Cane & Table, the latest venture by the folks who brought us Cure and Bellocq, recently threw open its doors on Decatur Street in the French Quarter. The tropical-themed rum bar and restaurant serves tiki-inspired cocktails and delectable food from a menu created by Chef Adam Biederman of Company Burger. Cane & Table, located in what was formerly Perestroika at Pravda, a Russian-themed cocktail bar, will be more like a restaurant than any of the Cure team’s previous creations, with a menu that includes dishes like deep-fried ribs and plantain dumplings. Open daily from 5:30-midnight with later hours on Friday and Saturday.

Lakeview residents are celebrating the latest addition in the renewal of the New Orleans lakefront: the Blue Crab Restaurant & Oyster Bar. Locally owned and operated, the restaurant’s atmosphere evokes they heyday of West End and the lakefront that Hurricane Katrina virtually obliterated in 2005. The Blue Crab offers a varied menu focused on Louisiana seafood dishes like catfish, oysters, shrimp and blue crab alongside New Orleans classics like red beans and rice and corn and crab soup. Open for lunch and dinner all day, every day of the week except Monday. thebluecrabnola.com