This beverage connoisseur has dedicated his life to drink. 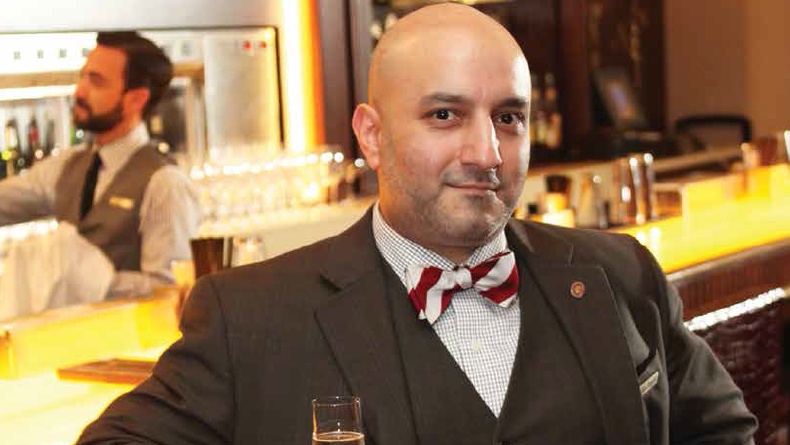 Russ Bergeron started bartending out of necessity after graduating from Louisiana State University. “I was trying to catch a job,” the New Orleans native says.

That job turned out to be an avocation. Over the course of 15 years, Bergeron rose from bartender, to bar manager, to sommelier, all the way to his present position as beverage manager and sommelier at the Roosevelt Hotel New Orleans.

Bergeron first worked at Emeril’s Delmonico. After mastering basic mixology, he began learning about inventory, categorizing wines, and regions and varietals. “About a year after that, I was the bar manager,” he says. The position gave him a chance to interact more with back-of-the-house staff, and a major benefit was getting to taste all the wines that came through the restaurant. Bergeron stayed with Emeril’s for a decade, contributing Delmonico’s classic Bloody Mary mix recipe along the way.

Eventually, it was time to move on. “Ten years, I felt, was a nice round number,” Bergeron says. He took a month off, searching for new challenges. After Bergeron created a wine and cocktail list for the Roosevelt Hotel, he was asked if he was interested in helping reopen the New Orleans landmark’s legendary Sazerac Bar. He was, and soon joined the Roosevelt staff.

When the Sazerac Bar reopened in 2009, the space next to it offered a new opportunity. Since the 1970s, the room had been known as the Sazerac Restaurant, where waiters in tuxedoes offered pricy plates to patrons. The hotel, however, felt the restaurant was outdated. “We were really looking for a concept,” Bergeron says. “The idea that everyone agreed on was, ‘Let’s bring it back to what it was from the late ‘30s to ‘60s: the Fountain Lounge.’ It was a casual place to go, where they had a band, and small plates and wines and cocktails were available.”

And so the Fountain Lounge returned to its former glory — with a twist. The space has been modernized, including a state-of-the-art wine-dispensing system and a raw oyster bar offering oysters from around the country.

What’s Bergeron’s favorite part of his job? “The challenge of it, to me, is the exciting part,” he says. “Coming from a standalone restaurant like Delmonico — coming into this job — it was a real challenge, because now, you’re looking at a hotel that has 500 rooms.” The sheer volume of alcohol the hotel requires is staggering, let alone the logistics of capably serving cocktails to all its guests.

It’s a challenge that Bergeron wholeheartedly embraces. He’s currently rebuilding the Roosevelt’s wine list, and plans to apply for a Wine Spectator award when finished. Other plans include rotating the hotel’s cocktail list quarterly, and reopening the rooftop bar when the season hits.

With all of his wine knowledge, Bergeron finds it hard to pick a single favorite bottle or varietal, but admits he loves champagne. As for cocktails, he’ll take an old-fashioned.

354
previous From Parys, With Love
next Sweet Success