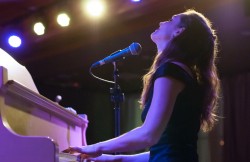 After graduating, she returned to South Carolina to join the music faculty at her alma mater. As an adjunct professor, she was teaching more than 30 lessons a week, and felt like the local music scene just wasn’t big enough. “I wanted to write and be exposed to a lot of different people and creativity,” she says.

McSwain had visited New Orleans in high school, and knew she’d feel at home here. “It’s like Charleston, only more relaxed,” she says of her adopted city. “Charleston with its hair down — that’s how I think of it.”

The performer’s biggest challenge when she arrived was putting together a band. Eventually finding a solid roster of players, she booked her first gigs at Mojito’s and Three Muses in the Frenchmen Street area.

Now, McSwain feels she’s truly part of the New Orleans musician community. She particularly remembers feeling like she was “here” when saxophonist Brad Walker asked her to play with his group at Maison on Frenchmen. “That was a big confirmation for me,” she says.

McSwain performs classic and contemporary jazz, and her original compositions. She also specializes in Brazilian music, a passion she credits to her grandfather. A dynamic performer, she shares her secret for successful shows: “The biggest challenge is to [both] put yourself into the music and take yourself out of it — take out all the things that are going on in your head.”

When composing, McSwain balances her musical knowledge with her instincts. “If one takes over more than the other and it still works, that’s good,” she says. She recently released her debut album, “Wax and Wane,” a polished 9-track record showing off her lively voice, impressive piano chops and thoughtful compositions.

When it comes to her future, McSwain isn’t motivated by fame — unless, of course, it helps with her goal of traveling the world and playing music. “Fame is not the goal,” she says. “It’s a tool.” jennamcswain.com

721
previous Performance Enhancer
next “The Holy Mark,” by Gregory Alexander