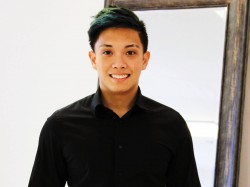 Some entrepreneurs wait years for a great idea to strike. Chris Pham grew up with inspiration right under his nose — and it smelled wonderful.
Pham is the founder of Menkoi, a Baton Rouge-based hair-and-body product line made with natural ingredients. “The majority of these products, my grandma used to make,” he says. “Her hair was always so silky and smooth. She passed away, and I decided to turn it into a business.”

In Jan. 2013, Pham launched the Menkoi line, which now includes a cooling shampoo; leave-in conditioner; styling wax and clay products; a scented hair mist; and a creamy, almond-scented body-milk moisturizer made with argan, camelina and jojoba oils. The process of converting his grandmother’s natural recipes involved some creativity. “I had to mix in a few new ingredients,” he says. “She didn’t use any preservatives, but my products can last two-plus years.”

What’s in a name? “I just came up with it,” Pham says of the Menkoi moniker. “It means ‘free and untrammeled,’ or ‘untouched.’” Menkoi products are free of chemicals, parabens and artificial coloring, underscoring Pham’s commitment to his environmentally sound beauty business. The body milk in particular smells scrumptious enough to eat — but Pham doesn’t advise that. “It probably doesn’t taste good,” he laughs.

A business degree from the University of New Orleans, and years of experience in sales and food service, prepared Pham to move into his full-time career creating and selling Menkoi products. Earlier this year, he opened Menkoi Hair Studio, a full-service hair salon based around his line. Now, he spends as much time as possible learning from his expert stylists. “I’m learning about different ingredients all the time,” he says. “I want to know what the next big thing is.”

Though Pham spends a lot of time at the salon, he also enjoys representing his products in person. “I don’t have any sales reps yet, so I’m going out there and introducing my products to stores,” he says. “It’s tough, but, once you go out there and do it a couple times, it’s like second nature.”

Along with expanding the Menkoi brand, Pham aims to appeal to customers across cultures; he notes that his products work for all hair types. “I’m trying to make this brand a lifestyle movement,” he says. “We have a lot of multicultural clients.”

Menkoi Hair Studio stylists regularly create video tutorials to teach customers how to use the line — and recently, the salon kicked off its in-person events calendar. On Nov. 3, Menkoi stylists will hold an airbrush makeup class, including equipment, plenty of practice opportunities and a portfolio-building photo shoot.

Pham says that a major benefit of running his own business is getting to spend more time with his family. He moved to Baton Rouge to be closer to his fiancée, with whom he has a 1-year-old son. “I’m trying to be there as much as I can for him,” he says. “When I was working full-time as a salesman, I had to be at work from 8 am to 9 pm — so whenever I came home, he was always sleeping.” The young father sees himself setting an example for his son.

“Entrepreneurship is in everybody,” he says. “Anyone can start a business.” menkoi.me