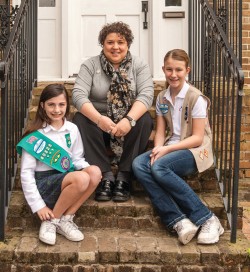 “I’m from New Orleans, and I’m a ‘chilly Gentilly’ girl,” laughs Elizabeth “Betsy” Stoner. “I can’t imagine living anywhere else.” In the ’80s and ’90s, this former retail executive found herself traveling to cities all over the country — but nowhere felt quite like home. “Even though I enjoyed my job and I traveled, New Orleans just kept pulling me back,” she says. “I had a baby, and another baby on the way, and I wanted my girls to grow up close to my family.”

Stoner returned to New Orleans in 1993, and she set about her next priority: earning her bachelor’s degree in childhood education. “I put myself through the University of New Orleans,” she says. “I was a full-time mom, and a full-time student. I wanted to make certain I got my degree.”

She didn’t enter the field of education, but she soon became the executive director for the Board of Supervisors of Elections for Orleans Parish. “Are you a registered voter in Orleans Parish?” she asks. “Those people that are there waiting for you, hopefully with a smile and courtesy — I make sure those people are there. And that they get paid.” In addition, she readies the board for elections and helps tally ballots.

But, in her free time, Stoner is also a member-at-large of the board of Girl Scouts Louisiana East, which is headquartered in New Orleans and oversees Girl Scouts in the state’s southeast parishes. She’s long been involved with the organization, and she raves about the ways it benefits girls all the way from kindergarten through high school; or, as a Girl Scout might put it, from Daisy to Ambassador. “I’m a third-generation Girl Scout,” Stoner says, noting that both of her grandmothers were Scouts; her mother was a troop leader; and her father served on the board of directors. “It was a natural progression for me to carry on that [legacy].”

As a board member, Stoner serves on executive and fund-development committees, raising money for programming and Girl Scout Camp upkeep. “It’s mostly women, but we have some Girl Scout guys!” she says of the board. “It’s very refreshing to hear our male counterparts speak on behalf of girls and what they have to offer.” Girl Scouts Louisiana East reaches nearly 23 parishes and roughly 14,000 girls, emphasizing values of community, confidence and creativity. “Is there room for more girls?” Stoner asks. “Always. No girl is ever turned away.”

This month, the Girl Scouts tradition turns 103. Stoner explains that although the organization’s goals remain the same, it has adapted its programming to modern-day needs. “Just as it was 100 years ago, it is important today that we stay relevant to what young women are going through,” she says, citing social media and other technology as new influences in girls’ lives. STEM (science, technology, engineering and math) programs have also become more important within the Girl Scouts organization throughout the country. “We want our girls to remain and grow strong in [those areas],” Stoner says. “Girl Scouts isn’t just cookies and camping.”

You might already know that recently, the Girl Scouts expanded their famous cookie sales to the Internet. “That’s a perfect example of how we needed to stay current with the times,” Stoner says. “It speaks volumes about where we are.”

Like her, Stoner’s daughters were Girl Scouts throughout high school — and although that’s where the program technically ends, the reality is that the experience changes women for life. “Once a Girl Scout, always a Girl Scout,” Stoner says. “I love being a Girl Scout volunteer. It’s really a part of my soul.”