Taxi driver Delores Montgomery stands up for her industry. 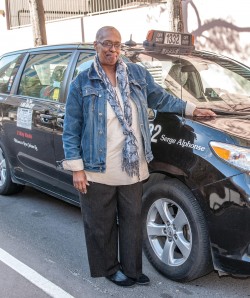 Don’t tell Delores Montgomery what she can and can’t do. Montgomery has been a New Orleans cab driver for nearly 20 years — and naysayers helped her get started. “To be totally honest, I became a cab driver because a man told me I couldn’t do it!” she says. Other attractive aspects of the job, like the ability to set her own schedule, also appealed to her. “That’s how I became a cab driver — because of the independence of it all,” she says.

Montgomery’s schedule got a lot tighter in 2012. As president of New Orleans Cab Drivers for Justice/AFSCME Local 234, she represents local cabbies who want to have a say in city policies that affect them. In 2012, the New Orleans City Council passed a series of ordinances imposing restrictions and requirements on cab drivers’ payment systems, permits and vehicles. “They affected us quite a lot,” Montgomery says. “We formed the organization after these ordinances were not in our favor. They created a hardship for the cab drivers.”

Malachi Hull, then-chief of the New Orleans Taxicab Bureau, said the new regulations would bring the city’s taxi industry up to the standards of other tourist-heavy cities, like New York, Houston, Atlanta and Chicago. But to Montgomery and many of her fellow drivers, the regulations represented a financially harmful incursion into their livelihood — especially the requirement that all cabs be no older than seven model years by 2014. “We were trying to get to Mr. Hall that it is not the year of the cab [that matters], it’s the condition of the cab,” Montgomery explains. “We had a few [older] cabs that were in very good condition. It created a financial problem.”

On Feb. 25, 2015, Montgomery answered questions about the taxicab industry in one of Reddit’s popular “Ask Me Anything” threads. The post received more than 200 comments from locals and visitors alike, and Montgomery cleared up several misconceptions about fare calculations, routes and other common issues. “I had never used Reddit before, and I had a nice time,” she says. “It was refreshing to talk to the public. I think the main thing that has stayed on my mind was the communication — or the miscommunication — between the taxicab industry and the public, because they have a misunderstanding about cab drivers.”

For instance, some people were unaware that many cab drivers already had credit-card processing systems in their cabs before the city mandated new machines. “They also had contracts [with merchant-processing companies],” Montgomery says. “When the city came up with their own credit card-processing companies … some of the cab drivers had to pay between $200 and $500 to get out of their contracts.”

With nearly 800 members, New Orleans Cab Drivers For Justice is still in ongoing talks with city representatives in an effort to resolve their grievances. “To raise awareness, we had to go back to the City Council, and we had to open up communications,” Montgomery says. “We are constantly talking to each other.” One of Montgomery’s ideas, which would make city streets both safer and more courteous, is to bring back a required training class for drivers. “I took that class,” she remembers. “If they could bring that back, and have a person or people who come from within the industry to teach that class, you would see a whole different mindset of drivers. I would love to teach that class, I’m telling you.”

Though New Orleans Cab Drivers for Justice has celebrated some victories, Montgomery is still fighting for better communication citywide. The organization’s next focus is on ensuring equal treatment between cabs and ride-sharing company Uber, which is slowly making its way into New Orleans. “All we ask for, at the end of the day, is to treat us fairly,” Montgomery says. nolacabdriversforjustice.org