A West Bank restaurant teaches young people how to cook — and more. 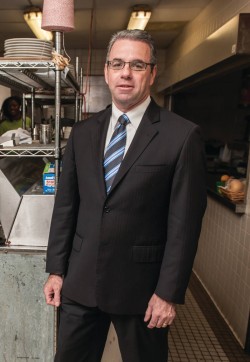 How many people can say that a single dinner changed their lives? Luis Arocha remembers the night that spurred him to get more involved with Cafe Hope — a West Bank restaurant, training program and mentorship opportunity for disadvantaged young people.

When Arocha first learned of the program through its co-founder and his longtime friend, Tim Falcon, Cafe Hope was called Kids Cafe. “It was a different model back then,” Arocha says. “On Friday nights, they would bring in kids and try to give them a fine-dining experience. They had host families who would sit with the kids, and talk with them and pray, and that sort of thing.” One Friday night, Arocha and his family came to Kids Cafe to have dinner. “We were with three brothers that night at the table,” he says. “It was meatballs and spaghetti. I’ll never forget it as long as I live.” When their food arrived, the three boys dug into it with their hands.

Falcon, who also co-founded Cafe Reconcile with Craig Cuccia and Father Harry Tompson, walked over to the table. “Tim immediately came over and said, ‘We should have explained,’” Arocha says. “‘These are three young men who never had the opportunity to eat with utensils before.’”

That was when Arocha knew he wanted to work more closely with Cafe Hope. “In New Orleans, in the United States of America — to think that we still have people who have never had the opportunity to use silverware … we wanted to be part of the community that decided to change that,” Arocha says. He joined the board of Cafe Hope and became executive director a year later.

Cafe Hope’s 16-week program trains disadvantaged young people from the ages of 17 through 23 in food preparation, table service and other aspects of hospitality. The organization was originally an affiliate ministry of Catholic Charities Archdiocese of New Orleans, and it is still grounded in spirituality.

In addition to valuable job training, Cafe Hope students learn communication, organization and other skills they’ll need to thrive as adults. “The first four weeks of the program are life skills,” Arocha says. Financial literacy, horticulture and nutrition are some of the skills the program teaches, in partnership with institutions like Gulf Coast Bank & Trust Company and The LSU AgCenter.

The second part of the program is a 12-week internship, split between kitchen and service training. Students cook with local produce and seafood, supporting the community that supports them. “They’re learning all of the skills they need to survive in the restaurant business,” Arocha says. “Upon graduation, we help with job placement.”

But to Arocha, it’s not important whether or not Cafe Hope graduates go into the hospitality industry. “It’s about learning the interpersonal skills, the work ethic — about doing what you say you’re going to do,” he says. During the first year in their new jobs, graduates partner with community volunteers who act as workplace advocates on their behalf.

Noticing that students were having trouble getting to their new jobs, Falcon created Cars for Hope. “A lot of the jobs are on the East Bank, and sometimes our students simply don’t have the transportation,” Arocha says. “We take donated cars, and we’ve found six mechanics that have agreed to fix the cars up for us. We’ve made it part of the financial literacy part of the program.”

Students can now buy cars at lower-than-market prices, with zero-interest financing for 18 months; first, though, they must show their pay stubs and a budget proving they can afford the car. Arocha foresees Cars for Hope becoming a fully fledged auto-repair vocational program. “That’s probably 18 months away,” he says.

On May 17, Cafe Hope will throw its second annual Local Food Fest fundraiser. The program partners with area restaurants, and each creates a dish with local ingredients; there will also be beer and live music. “It’s free to come out,” Arocha says. “People buy a dish, and all proceeds go back to Cafe Hope.” Last year, 20 restaurants participated — this year, Arocha is hoping for 30. cafehope.org

Cafe Hope serves lunch Tuesday through Friday from 11 am – 2 pm, and dinner on Friday nights from 6 – 9 pm.

476
previous Driving Force
next Azie Tesfai: A Bright, Shining Jewel of an Actress