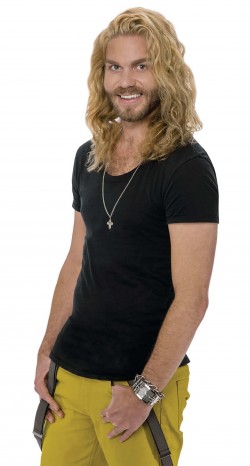 “In the midst of a hum-drum retail environment, I started to think, ‘Hey, I can make stuff cooler than this,’” he says. “All I needed at that point were the tools to do it.”

He spent all his free time (and much of history class) sketching fashion ideas. He had just come out of the closet and found a real sense of refuge in fashion, expressing himself in ways he had never been able to before. But he admits, his exposure was limited. “Especially in Baton Rouge,” he says. “You’re limited to what you see in the malls. All I had was my imagination. I didn’t know what high fashion was.”

A decade later, his imagination carried him to heights he couldn’t have envisioned as a teenager. Last year he was declared winner of the 2016 New Orleans Fashion Week Top Design Competition as well as the Yelp People’s Choice Award. Following that, he won a spot last fall as a contestant on the 15th season of Lifetime Network’s Project Runway.

The reality-TV experience was nerve-wracking, thrilling, awful and amazing all at the same time.

“The first thing I can remember was being very paranoid after the first challenge,” Allen says. “Being around all these cameras … the people behind the curtains … it was like being at Oz. It made me question a lot of things, like ‘Who am I as a designer?’ And being criticized, it was difficult for me. I was in the bottom of the first two challenges and I had to wonder, ‘Why did you bring me here? Why am I still here if you don’t like what I do?’”

After the third episode, Allen was fed up with feeling inadequate. “I decided I’m going to do what I came here to do: make cool stuff,” he says. “That helped me. It became a thousand times better after that. It was a really fun time.”

Ultimately, he was eliminated from the top 10 in the seventh week, but he felt he finished strong and true to himself. “I was personally really proud of what I made,” Allen says. “Was it perfect? Not at all. But was it risky? Did it have inspiration and communicate what I’m about? Yes.”

Now Allen is hard at work on his entry for the 2017 New Orleans Fashion Week and tips his hat to his adopted city, New Orleans, as the biggest flame for his creative fire. He says the diversity in architecture is a symbol of the variety of people who live here, all with the common goal of enjoying life. “I want to celebrate this spirit with my collection by incorporating a variety a colors, textures and silhouettes that remind me of the city,” he says.

Losing the show was beside the point: “Project Runway’s not necessarily a runway show but a storyline,” Allen says. “I understand and appreciate stories, but the hardest part is being on one and not being an actor. I was so thirsty for criticism to build myself to grow as a designer through the journey. Afterwards, I realized the feedback I got wasn’t all necessarily objective or 100 percent helpful for me. Now I can look at the base of what it was: as a platform and for exposure.”

His father, his inspiration: “He’s always believed in me and pushed me to go for it,” Allen says. “It especially means a lot coming from someone like him, who had a steady job his whole life ….”

His own personal fashion: Allen is a jeans and t-shirt fan: “I really don’t push for this overall super-high fashion image within myself,” he says. “At the end of the day, it’s really not about me.”

His future in fashion: “Being on Project Runway led to more followers on Instagram, but does that equate to financial stability? No,” Allen says. “People like my personality but that doesn’t mean they’re investing in my future. The harsh reality is I still have to do that myself.

“I think at the root of me — I realize this is silly and battle it frequently — but I envision this rich lady seeing what I do and inviting me to live in her closet like a little elf and make her stuff,” Allen adds. “It may not end up being a fairytale, but maybe more like, ‘Hey I like what you can do — can you make it for me?’ I want to make people feel beautiful and make them some bad-ass clothes and have it at that. The more I show and the broader the appeal, the more actual people become interested in what I do and I think it will catch fire.”