It’s not a family reunion unless someone goes home injured. 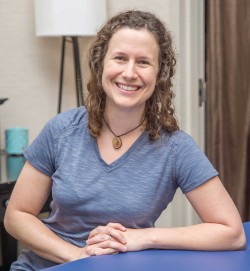 In 2008, Christina Walsh, PT, was playing in the pool with a gaggle of cousins when someone grabbed her by the head and yanked her violently under the water. In pursuit of treatment for painful whiplash, she tried Integrative manual therapy and made a rapid, dramatic recovery after only a few sessions.

The discovery rocked her world and she dropped everything to begin training at the school of Integrative Manual Therapy in Connecticut to learn the technique.

“My husband, thank God, was supportive,” Walsh says. “We had just finished paying off my student loans from physical therapy school.”

IMT is a style of one-on-one gentle, hands-on treatment of physical therapy that aligns and decompresses the body’s tissues and releases tension to decrease pain. Walsh says it’s an alternative to the traditional, more aggressive, exercised-based physical therapy.

“The touch is very gentle, but the depth of the release is very palpable,” she says.

Many of her patients experience instant relief, including a patient who had been experiencing pain in her tail bone for two years. Another with five years of back pain found relief in just three sessions. “One of the most dramatic cases was a woman with pretty pronounced scoliosis in her early 70s,” Walsh says. “She said she was a person who had tried everything, and said the relief from pain and the ability to function and live her life has been the greatest with my treatments.”

Walsh admits IMT is hard to describe — but only because it’s not readily available in the South, so we don’t have a good frame of reference for it. One of her clients terms it “an Eastern approach to physical therapy with the Western benefit of all the science behind it.” Another texts her when he is in pain: “I need voodoo.”

“He’s never going to be in charge of my PR because that won’t build any credibility, but it’s a lot of fun,” she says, laughing. “You get better movement, less pain and it sticks. That’s how I was hooked from the start.”

The irony that a near-drowning helped her discover her calling isn’t lost on Walsh. “You never know what form your gifts in life will come in,” she says. Hands On Therapy (inside Ascension Fitness), 3501 Severn Ave., #3C, Metairie, (352) 870-8205, handsontherapynola.com

Regarding the mind-body health connection: “My grandmother always used to say, ‘If you choose to put a smile on your face, you’ll feel happier,’” Walsh says. “It’s a spiral … when you’re feeling better in your body and yourself, you project more happiness, and when you choose to see good, you also feel better. I’m blessed to have that sort of outlook modeled by other strong, confident women around me.”

On building relationships: “As I get to know a patient more, we openly start navigating through the components of stress that might be affecting their presentation and pain,” she says. “And I re-check range of motion head-to-toe … we’re never just treating one body part. It’s all very much connected.”

Potential for local growth: “Integrative Manual Therapy is not terribly common in this part of the country,” Walsh says. “I only know of two other people in New Orleans practicing it. I hope it grows … that way people are more ready to experience it and are more likely to be looking for it. There’s plenty of need … this city could handle a lot more practitioners and not be overridden.”

On choosing her career path: In addition to loving high school anatomy and having an aunt who helped her father’s back pain with physical therapy, Walsh says, “I knew I was called to pursue a career where I was going to be helping people. They tell you not to say that in your physical therapy school interviews because that’s what everyone says, but it’s true! I really wanted to have an impact on people’s lives.”

A tight-knit partnership with Ascension Fitness: “Jenn [Lormand, the owner} came to me seeking treatment for her own aches, pains and injuries, and we just kind of hit it off,” Walsh says. “You know when you meet somebody and you have that platonic soulmate connection with them? She loved the work I was doing and thought her clients at Ascension Fitness would benefit from what I was offering. It was a match made in heaven.”