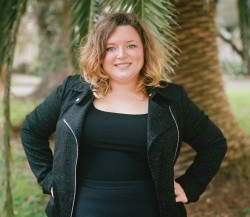 In a world of Snapchat: Send; disappear; repeat … films can be an intellectual antidote.

Fallon Young, the new executive director of the New Orleans Film Society, believes deeply in the value of seeing work in a theater, building community in the company of friends and strangers, and learning through the dialogue that comes out of such a shared experience. She also believes in film’s growth and permanence.

“The rapid and sustained growth of the New Orleans Film Festival over the past decade ensures that film is still relevant,” Young says. “Audiences are flocking to the festival to be inspired by new work and to take part in it in a way that requires a greater time and intellectual investment than many of our fleeting relationships to technology may require. I believe, for some, this method of engaging with the work, offered in its purest form, reaps greater rewards.”

Young replaces Jolene Pinder, who stepped down from the lead NOFS role at the end of 2016 after six years at the helm. Young’s hiring marks her return to the city after an enlightening stint as interim executive director and director of communications and community engagement at San Francisco’s SOMArts Cultural Center. SOMArts fosters access to the arts as well as artist-community collaboration in the Bay Area. Young feels strongly her work there seeking strategic partnerships and shared resources will translate well in her new position, and the board was attracted by her commitment to developing and supporting artistic communities.

Young grew up in East Texas but honed her culinary and Cajun cultural chops through constant visits to family in Eunice, La. After college at the University of Texas, she sharpened her sensibilities through more than nine years in the Bay Area, including her first visit to San Francisco’s Frameline LGBTQ Film Festival.
“It inspired in me a passion for what a festival can do in terms of convening a diverse community, sparking critical dialog among participants, and offering memorable cinematic experiences that both reflect and shape identity,” she says. “It helped shape my openness around my own identity, as well as drastically opened a door for me to access the voices and histories of my community, which I would say paved the way for me to be unapologetically who I am in the world today.”

Now Young is excited to be back in what she calls “a thriving epicenter of creativity and culture,” and proud to be a first-time homeowner in the Seventh Ward and ecstatic at the opportunity to lead NOFS.
“I feel passionately about creating a welcoming and sheltering environment for audiences to discover and enjoy exciting new work by local and regional filmmakers, and about nurturing new artistic voices, especially those for whom there are greater barriers to access.” neworleansfilmsociety.org

Five things you might not know about the New Orleans Film Society:

3. NOFS is the host of Emerging Voices, an annual initiative to create a more diverse storytelling landscape by giving filmmakers of color in Louisiana greater access to gatekeepers. Selected filmmakers are paired with a film industry leader who acts as a mentor through one-on-one meetings and short intensive meetings with other industry professionals during the NOFF Industry Exchange to pitch their projects and build further connections.

4. The Society launched Create Louisiana Filmmakers Grant Program two years ago with key partners Deep South Studios and the Louisiana Endowment for the Humanities. In its first year, it awarded a $50,000 grant to locals Nailah Jefferson and Jon Wood to make the short narrative film Plaquemines.

5. Cinema Classroom is an annual program that expands young students’ exposure to film. Students in schools around the city receive the tools to engage critically with visual media and have the opportunity to meet working filmmakers.

734
previous Youth Empowerment on the Run
next Isabel Borges