Movin’ to the Groovin’: Join music lovers at City Park during the Thursdays at Twilight concert series. 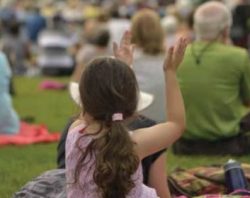 If you’re in the mood to hear some of New Orleans’ favorite performers (and let’s face it … who isn’t?), then be sure to stop by the Pavilion of the Two Sisters in City Park for the Thursdays at Twilight concert series. This popular music series runs through August with a fun lineup of musicians.

In her third solo exhibition with Callan Contemporary, Sibylle Peretti’s new exhibition, It Was Such a Beautiful Promise, reflects on our complex relationships with nature. Inherent to the theme are the universal questions of meaning and longing. Viewers will notice pearls and strands of luxe beads that recur throughout the new series of kiln-formed glass and acrylic panels. Pearls, which have for centuries symbolized an intrinsic longing for shared values, symbolically charge Peretti’s work.
“There is a connection to the promise of hope, healing and resolution seen in these pearls,” Peretti says. “They’re seductive and beautiful and symbolize something you deeply desire. You may find it, you may not; it all depends on your own perception.”

Throughout the exhibition, which runs through June 25, visitors will also notice animals as recurring themes. Hawks, foxes and coyotes appear, exhibiting a connection with humans, collecting pearls with which to perhaps adorn themselves, build their nests or simply to marvel at their beauty. Children also figure prominently in Peretti’s work, showing a sense of tenderness and wonderment. The unique silvered and formed opalescent glass used in her artwork shifts color and plays beautifully with gold leaf, original photography, and painted and carved plexiglass panels. Peretti calls her material “magical matter” — and, indeed, her creations radiate with a hushed, fairytale-like aura. 518 Julia St., (504) 525-0518, callancontemporary.com
Poster Child: A new exhibition of posters by Polish artist Waldemar ?wierzy is on view at The Historic New Orleans Collection.

On the heels of the New Orleans Jazz and Heritage Festival, The Historic New Orleans Collection is highlighting a new collection of posters — made by the Polish artist Waldemar ?wierzy (1931–2013) — now through Dec. 17. Giants of Jazz: Art Posters and Lithographs by Waldemar ?wierzy from the Daguillard Collection represents a convergence of music and art.

?wierzy, who is considered a leader in the 20th-century tradition of Polish poster art, was a graphic artist, book illustrator and a master of poster design. He produced an estimated 1,500 designs over the course of his career. This exhibition highlights 17 of his larger-than-life portraits focused primarily on titans of jazz and rhythm-and-blues. Some of the notable subjects include King Oliver, Louis Armstrong, Ella Fitzgerald and Ray Charles. The exhibition also includes background on the individual musicians that ?wierzy depicted and their ties to New Orleans.

THNOC acquired the posters, along with several other works by ?wierzy, as part of a much larger and diverse acquisition from the prominent immunologist and collector Fritz Daguillard and his wife, Rita Daguillard. Admission is free. 533 Royal St., (504) 523-4662, hnoc.org